Back in 2007, I started a pair of flannel pajamas for Andy as a Christmas present out of what I thought was a fun coffee print, only to discover after making the pants, that I was about a yard short for the top.  We searched Joann stores everywhere, friends searched--nothing.  Three years later, I gave up and bought some brown flannel.  Andy actually never wears brown because his mom insisted on dressing him in brown when he was a kid and he's never worn it since, but for the sake of a finished set of pajamas, he agreed to try.  However, when I started cutting, I found I hadn't bought enough of the ugly brown flannel either!  And it was probably around this time when I discovered I didn't know where the pajama-top-in-progress was, so mixing the two fabrics was out.

When Andy and I were driving back from our trip to Ashton and Yellowstone, we stopped along the way for lunch in a town that just happened to have a Joanns, and by this time I'd acquired ANOTHER piece of flannel that was too short because now the regular Joanns flannel is a new we're-so-cheap-we've-invented-a-new-skinny-width and one must add about a yard and a half of extra material to compensate.........which I didn't know until after I bought it, and clearly after I walked out the door with my insufficient flannel, my local stores gathered up any remaining bolts of that particular print and set fire to them, as no less than 4 stores AND the online ordering no longer had it.  The store we visited DID still have some, and 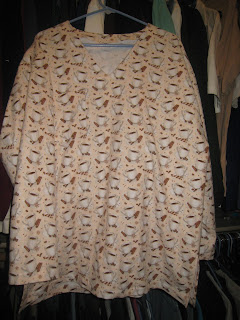 they had a coffee print that was close enough to work, and the following weekend I immediately made a new pajama top before I could lose the pattern, the fabric, or Andy and just short of twelve years later, Andy has a finished pair of pajamas!!!!!!!!!!!!!!!