Google has been updating and changing Blogger pretty regularly, which usually means that I have trouble uploading or moving pictures. Today, however, it has outdone itself: Nothing I type is showing up.

I am hoping that even though I can't see the words, they make it onto the blog--with or without typos and errors and misspellings.


----time passes, lots of swearing at Blogger, Google,
and the idiot who ever thought up computers in the first place--
Aha!  I can upload pictures on one computer, but have to change to my Unix-based computer to get anything else to work.  Thank you sadistic bastards at Microsoft.

ANYWAY, I was able to find two buttons that reasonably matched the pinkish buttons I wanted to use for the jacket, so it now has buttons and has even been worn, but I managed to forget to take a finished picture.  I'll try for that tomorrow, depending on what Blogger has in store for me tomorrow. 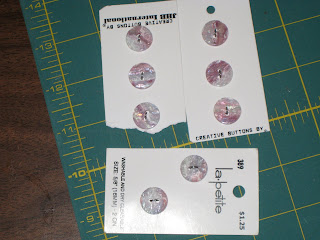 Theo is helping me with cutting out the remaining pieces for Andy's robe... 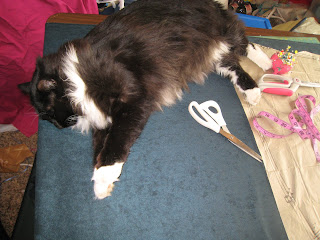 which helps explain why it didn't get done for Valentine's Day. 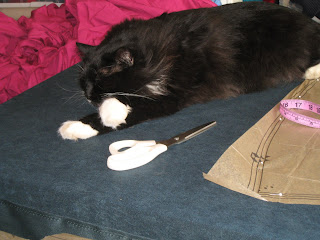 Andy, however, managed to complete my gift just one day late: 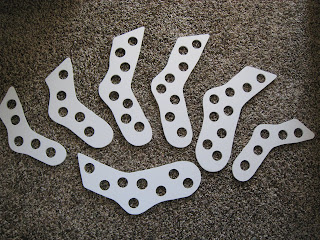 A set of sock blockers!!!!!  He found a the patterns on a woodworking website, and made all of these without me even suspecting.  How cute is that?  Any guesses who gets the next pair of socks?

Though socks might be on hold for a while.  A friend of mine sent me a get-well gift, 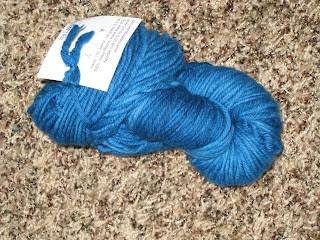 My very first skein of Malabrigo!  I'm torn between knitting it up immediately or just treasuring the skein of yarn for a while.  Right now I'm spending a lot of time just petting it, which is also fun.

And two days at the hospital gave me a lot of knitting time.  Thanks to everyone for your well-wishes.   My father is doing extremely well--providing proof that staying active one's entire life does pay off in the long run, as he's actually gotten to combine some steps on physical therapy because he has so much muscle and is pretty darn fit for a man of 68.  I think his biggest problem is going to be learning that the new hip might mean slowing down just a bit--like not jumping on and off of haywagons or running after cows on the ranch.  I think he still has his doctor's permission to run FROM cows if need be, but that happens less and less on the ranch.  Cows that tend to try to trample or gore the humans on the ranch tend to become hamburger now.  Which since I have been kicked, trampled, and charged more than a few times, I thought it was a wise policy to adopt.

So with that extra knitting time this week, the new shawl is moving along really well, 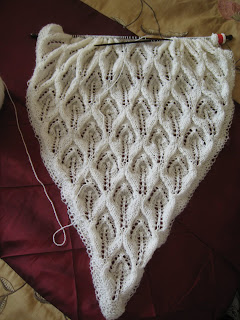 as is the latest one-row scarf, 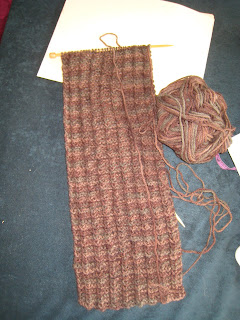 and I have finished a scarf for my niece's upcoming 6th birthday.  It matches the one I made for her 18-inch doll, so we're hoping that might give her an interest in learning to knit. 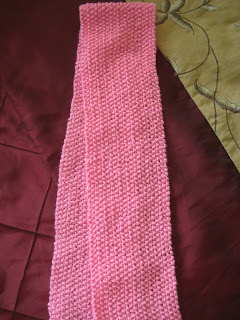 I'd like to get another hat done for her doll as well, but I will need to get everything mailed in a few days, so I may just start stockpiling doll clothes for Christmas.  I think I might be having more fun with the new doll than she is!