Mostly of the really bad sort.  I did manage to get all the buttons sewn onto the new dress, 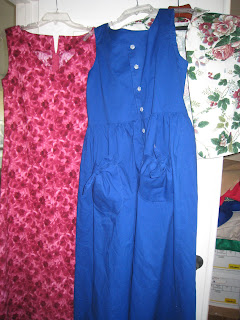 which is when I discovered I put the buttonholes on the wrong side.  To be fair, I was partaking of a white chocolate martini while sewing the buttonholes, but I'd marked the silly things BEFORE the martini, so I have no excuse.  I really did look at the picture on the pattern and think I was putting it on correctly.  Oh well--it's certainly not the ONLY thing in my closet with buttons on the wrong side.......

I am finally ready to show you Saturday's project.  For once, Husqvarna's website posted a free pattern that did not require buying a whole new machine or $500 accessory, so I decided to make their striped bag.

I should have known better.  If Husqvarna can't get money from customers, they're not really interested in anything, so the pattern isn't great.  There's an 11 by 12 piece required, but they didn't mention which way the stripes were to go on the long side.  I even measured the schematic (which was perfectly square), checked the other measurements to see if there was a length v. width consistency in their pattern (there isn't), and finally just guessed.  This is the point where there might have been some swearing, and when Theo decided to support me from OUTSIDE the sewing room: 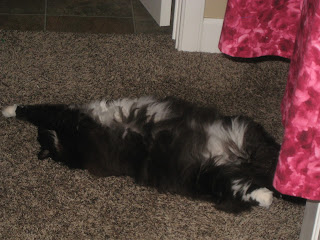 (after being photo-bombed by Calisto) 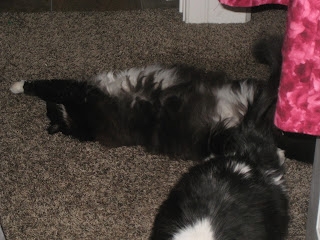 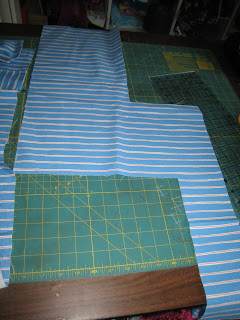 Oops!  These are the times when I'm glad that my hobby isn't chemical experimentation or anything to do with heavy machinery.  I had just cut the remaining pieces out of my bag.

The problem, it seems, was this: 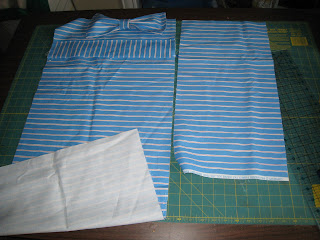 Somehow I got it into my head that the piece on the right--which is heaven-knows-what, was the main part of the bag.  I'm not sure how, exactly, since it's probably half the size it should have been.  When I finally DO get this silly thing done, there will be a small, striped project bag to match.  I'll just look really cutesy instead of clumsy.....unless I mess that one up as well.

I'd actually been making this bag using the Bernina sewing machine, but when it came to attaching one of the pieces, the instructions specifically called for my "D" foot.  So, I decided this could be a "learning opportunity," so I dug out my "D" Husqvarna foot, 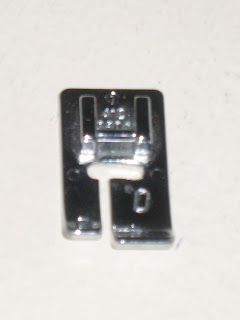 and my instruction book as I hadn't the slightest idea what this was for.  Turns out, it's my blind hem foot.  Which, honestly, led me to think we might be doing a blind hem, which I'm not very good at.  So, I threaded one of the Husqvarna machines, put the blind hem foot on, and went back to the instructions:

Now I am not at ALL good at blind hems, but even I know they aren't done with a straight stitch.  After a few experiments, I figured out that this is a new method of edge-stitching, which the blind hem foot works quite well on, but I still don't want to discuss the amount of time that took me to figure out.  And THIS is how the bag ended up in Time Out.

Some days, I am really thankful for knitting: 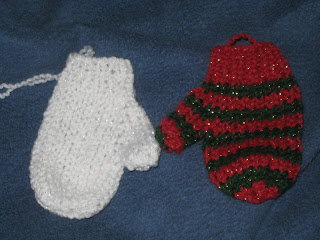 There are two more mitten ornaments, 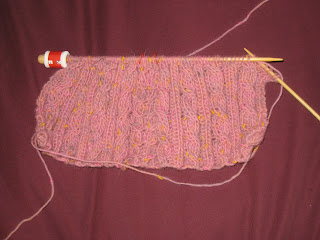 and I have now started the first sleeve for the March Madness Sweater!  Obviously, at this point, the goal is to finish the sweater before March 2014...........