A Visit To The Land of Actual Finishing......

In the past few years, I've made quite a few lace scarves.  I kept a few, gave a few as gifts, but had started wondering what on earth I'd done with them: 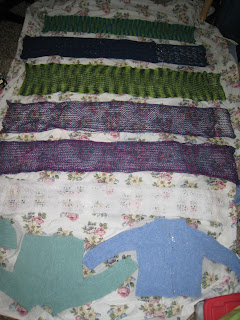 Turns out, they've been long-time residents of the Bin of Needs-Blocking Knitting.  Yes, you do see 6 scarves, 2 baby sweaters, and part of a baby hat.  That was the first project this morning.  I'd like to say that the bin is now empty, but then again, I'd like to be taller and I'd like potato chips to be good for me.  Let's just say that the bin is slightly less full now.

What prompted such responsible (and, frankly, uncharacteristic) behavior this morning? 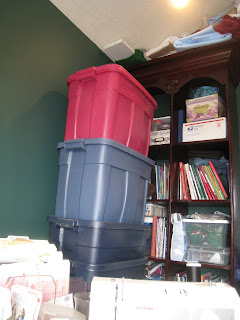 "Flash Your Stash" is coming on Ravelry.  This is when you take ALL your yarn out of the bins, photograph it, then share the pictures on Ravelry.  Personally, I think it's the knitting equivalent of a horror marathon.  Technically, a less-full bin of finished projects really has no impact on the size of the stash, but it will be something LESS in the sewing room, and when I face the great lace weight bin, I'll know there's less in there.  Technically, it's the smallest bin, but it contains BY FAR the most yardage and honestly only fits in the smallest bin because there are two bigger bins sitting on top of it to smash it.down.  One only opens that lid with caution--believe me.

Speaking of things to be approached with caution: 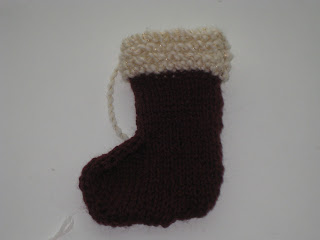 the problem ornament is done.  Okay--I am willing to concede that every single mistake was because I failed to read the directions, but this ornament will be in the gift bin all the same.

To redeem myself, I decided to play around with some beads: 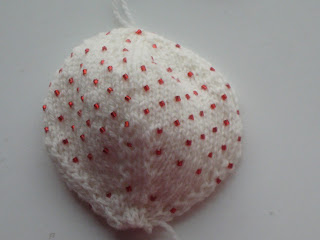 which turned out rather fun.  Because it's fingering yarn, I strung all the beads on the yarn before starting rather than adding them as I went along as I do with lace.  In the future, I think fewer beads would be fine.  I'd purchased red and green beads on clearance when shopping for a gift for someone else, and I am rather proud to have used them, as there might be a lot more beads in my stash that I bought "just because" than beads I bought for specific projects, and there might have been a little doubt in my mind as to whether or not I'd ever use them.  So, I've used some!  I am NOT a bead hoarder.  Just a bead stasher......

The March Madness sweater needs a little thinking right now, as the charts in the magazine don't match up exactly with the charts one has to download from Vogue's website, so it hasn't been conducive to the relax-in-the-evening knitting for a few days, so 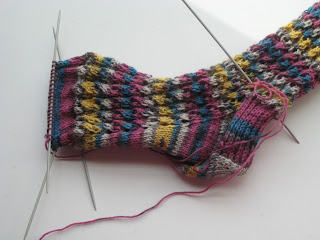 the new socks have gotten some attention.  I'm at the toe decrease on sock number one, so hopefully I'll finish this up tonight.  Socks for me always look like they have such little feet now that I make a lot of men's socks, but I swear this will be correct.  I don't like to make socks that are exactly the same length as my foot no matter WHAT the pattern books say.  I need them to be snug, and by the end of the day I prefer the heels closer to my actual heel than my knee cap.  Call me crazy.

And, lest you think it has been abandoned, 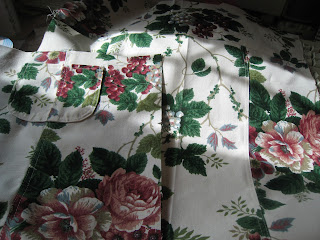 the floral jacket is moving along, the top stitching of the pockets was just as hideous as I remember, and we're just moving on.  Luckily I already know that no one notices once the jacket is made.  Or they're nice enough not to mention my uneven top-stitching, which also works.