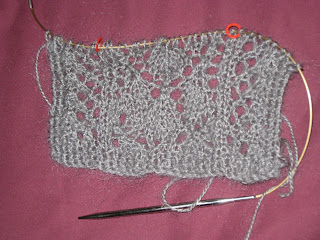 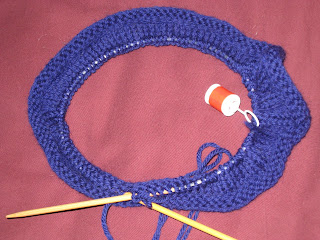 not one, but TWO new projects.  Restraint?  What?

The first is a scarf I'm calling Rosemary and Thyme.  I'm hoping it will be easier to see in future pictures, but there's sort of a leaf and spiky-thing motif going on......and we've been listening to lots of folk music recently.  As there was a white chocolate martini involved, I'm just happy that we weren't listening to anything stranger, as I don't want to have to continually explain why I'm knitting a scarf called "Puff the Magic Dragon" or "Bamboo Stick."

The second one is another slip-a-color hat, which is my current favorite hat pattern.  Both of these involve bigger needles than the socks or Foreign Correspondent scarf, so I'm hoping to get both of them done fairly quickly.  But then again, I think I said that about Andy's birthday sweater as well, and that took 11 months......................