The Stash In All Its Glory

I have been cleaning.  (And this might be a good time to point out that there are brighter things to do after one has strained one's back, but in my defense, there are probably worse ones.)  There is still a great deal to be done, but I did at least get to the point of being able to take pictures of The Stash. 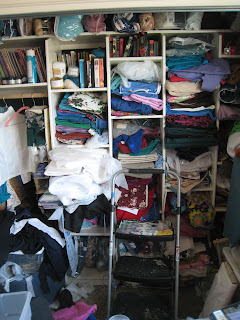 which is getting closer to door-dom all the time.  Or, as I should say, is getting closer ever since I stopped buying fabric like a demented human pack-rat.  The yarn is a bit harder to see as so much of it is at the top, but those bags are almost all full of yarn: 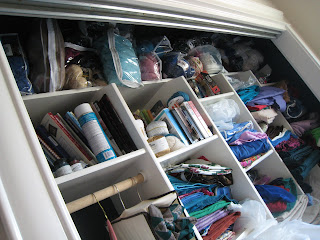 Not too bad, right?  Of course not--because that's not the entire stash!  On either side of the closet are: 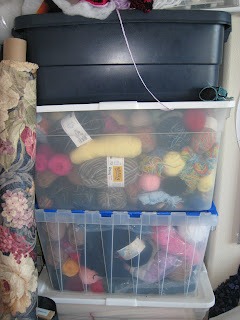 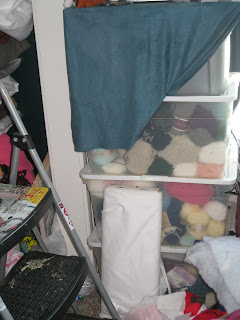 The grey contains dishcloth cotton odds & ends, then worsted weight, not-so-nice sport/dk weight, and on the very bottom, chunky/bulky.  The fabric is there because there is a sheet of plywood on top of the bins to give my little stereo something flat and stable to sit on and it was constantly snagging everything it could reach.  Spreading scrap fabric takes a LOT less time than sanding!

Across the room, there are wire shelves mostly holding books and tools and stuff, but the top shelves and the very top are: 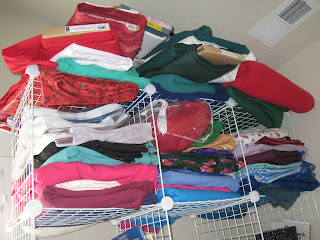 Which gets to be above the desk where I sew for two reasons:  One, I have nowhere else to put it, and two, fabric is a lot less prone to fall down and bonk me on top of the head than bags of yarn are.  Always a consideration for a stash this size.  There's also a similar (though smaller) pile of felt at the top of the shelves on the other side of the room, but I don't seem to have a picture of that.  I'll have to add that one later.  There's also a large Rubbermade tub of quilting fabrics underneath the sewing table, but we all know what a tub looks like.
Whew!  I think I need to go lay down.............

Toni, you floor me, what a stash. Let me tell you, mine is a good rival for yours. I just haven't been brave enough to take pictures. Guess I will have to one of these days, although, I try to keep the yarns and quilting in separate sections of the basement. It does tend to help, and now I have a closet here in the living room that is for yarns.

And the funny thing is that I started cleaning my walk-in closet today and rearranging my stash. Just while I was in the process, I thought of you and wondered what my stash would look like compared to yours. Now I bow to the master...

I think we need to all come over and shop in your closet. My yarn stash has definitely gone downthe last two years. I have been giving some of it away, using a lot of it and ignoring some of it.
Have a great day,
Meredith

Okay, this is spooky. First I read the other Toni's mind, and now apparently yours. I was (for no good reason) thinking about my stash yesterday afternoon. Cue the creepy music.

Good for you for posting the stash! That takes a lot of guts. I bet that by this time next year, you'll be able to put the doors on. Probably before then, even.

Bolts of fabric!! You are amazing. :)