When The Going Gets Tough, The Tough Get.... 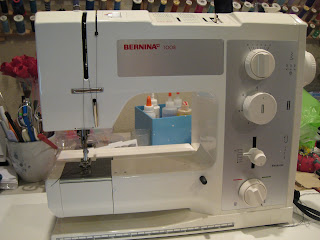 Meet Bernie!  I tried finding a used one, but the used Berninas were going for more than I wanted to pay for a used machine, so yesterday I mustered up my courage and bank account, and bought this--which technically solves my stash problems too, because now I don't have any money to spend on yarn or fabric anyway......

It's a purely mechanical machine, and this is the one that home ec and theater classes used, so I figure if it can withstand teenagers, it will work for me for the next 40 years.  And even when I eventually DO get Jeeves back, it will be a good idea to have a heavier machine for bigger sewing projects since Jeeves has more things to go wrong.

Speaking of Jeeves, I called and left a message at my Husqvarna dealer yesterday before setting out to run errands and pick up Bernie ........and no one has called me back yet--more than 24 hours later.  I think I would have gotten Bernie even if Jeeves had been ready to be picked up yesterday, but the poor service from Husqvarna just keeps adding up.  If they start consistently not returning my calls, I'll be making a call to the Attorney General's office and the Better Business Bureau.  You can't advertise a warranty and then effectively not honor it.

My first sewing project is this 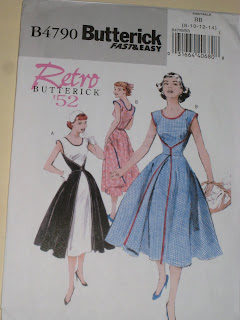 and I was hoping to have it finished last night, but that's bias tape all the way around the dress, and it takes quite a while to to put it on each part.  BUT, I should have a project done today!!!!!! 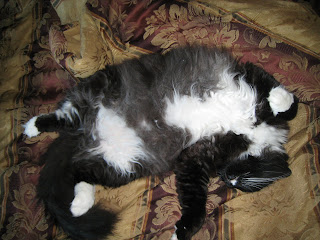 Since Jeeves has been gone most of 2 months, I don't think Theo believes we're actually sewing again.  Maybe in another week......