Showing SOME Amount of Maturity

The 90-day spending ban has been over Since August 16, and I have only purchased one knitting book: 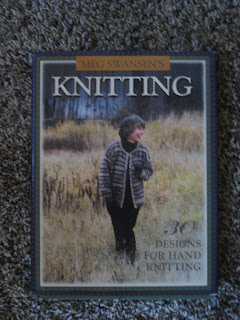 It was even a used book, since this is sadly out of print.

I have been knitting for about 28-29 years (depending how old I was when I actually learned), and in that time have accumulated an astounding number of knitting books/patterns/magazines. When new books come out, it's relatively easy to resist buying them by remembering that 1) I have nowhere to put them and 2) I already have at least a 10-15 year project list in my possession already--not to mention that I could stop being lazy and simply design my own sweaters again. I used to design quite a bit of what I knit--especially in those early knitting years when I was a lone un-hip knitter hiding in the closet with my metal size 6's and scratchy Red Heart yarn. Kmart actually carried yarn at that time, a store in the Ontario mall called Sprouse Reitz could be counted on for yarn and popcorn--not necessarily in that order. I was lucky to get most of my first knitting projects/disasters out of the way before blogging became popular. Still, in the interests of not overwhelming readers with my current knitting ability (ATTENTION KNITTING GODS: THIS IS SARCASM--THERE IS NO NEED TO RETALIATE!!!) , I thought we'd share my very first sweater: 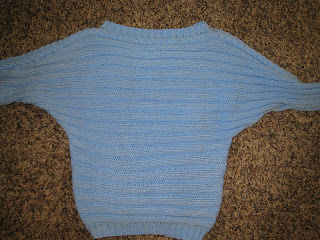 The pattern called for a ribbon-type yarn. I used Red Heart acrylic worsted which is oh so ribbon-like. Yup, I got gauge and created the world's first bullet-proof sweater. 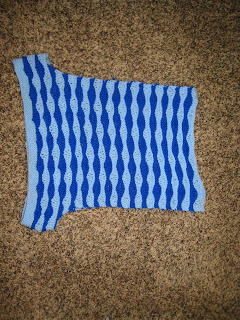 It was supposed to be some sort of shell. Instead it looks like someone attempting to clothe herself in potholders. I'd correct the sideways photo, but it's such an awful project that being right-side up won't help any.

In my defense, the third sweater turned out rather well--though I still substituted a wildly-innapropriate yarn--and I still wear it.

I wish I had pictures of my first "designed" sweater. It was a striped sweater with a polo-type collar for my sister, and somewhere in the middle of the sweater I had a massive gauge epiphany of sorts--not that I understood gauge, but my gauge changed to a somewhat tighter and better-looking stockinette stitch. Unfortunately, it did this between the back and the front. The front turned out at least 2 inches smaller than the back. Totally undaunted, I matched the stripes and sewed the pieces together, creating one of the most ridiculous-looking sweaters ever. I think my sister might have worn it once before throwing it away, and who could blame here--though to be honest I'd have liked to have undraveled that back and tried again.