There Is Cleaning Happening!

Sorry, should I have warned you?  I know it's such a rare occurrence that the shock might be too much here, so sit down for these next bits:

I am donating an entire (overflowing) box of yarn. 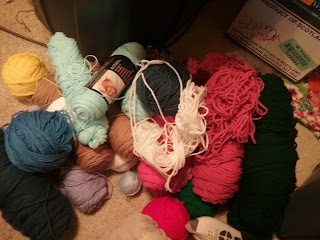 I have admitted that 3 old sewing WIPS are truly irreparable and have tossed them.

I am donating Christmas crafting books.

I am even donating one of those huge Rubbermaid totes BECAUSE IT'S NOW EMPTY AND I DON'T NEED IT! 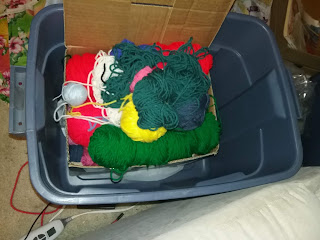 
This is even a visible dent in the craft room!  To be fair, none of the yarn was good stuff--I even found Fun Fur lurking in the bottom of the tote 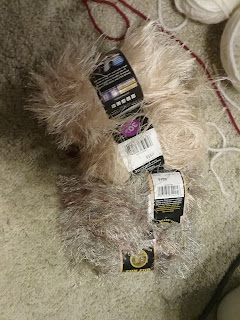 (which might be breeding as I swear I purged all this stuff before moving), but I still struggled a bit to part with this, 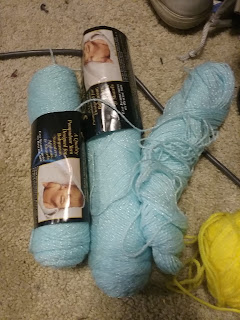 which is crazy.  I believe I bought this for a sweater for my sister's first child, and he's now in high school.  In my defense, he did get something like 8 sweaters, but this has been in my possession for at least 15 years now and I have done nothing with it, my close friends are all too old to have children, and I have lots of yarn and lots of projects that I want to make.  Now I just have to stay strong until that box actually leaves the house........

I did run across these, 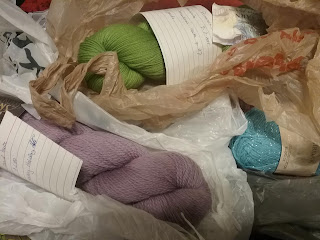 which helps to distract me.  Back in 2015, I ordered some yarn, then made up little project bags to "surprise" myself with new yarn when I was getting the must-buy-yarn shakes.  This worked well until we moved, and now all my yarn is basically a surprise when I find it, and frankly, knowing where something actually IS is enough of a surprise.  I'm going to cast on that little turquoise project later today when I need a break from cleaning/purging as a bit of a reward.  Andy has gone camping for the weekend, so I have the weekend to myself.  Who would have thought I would spend it cleaning?  Honestly, that wouldn't be anyone's top 10 guess.........

I did plant a few things and do some weeding last night AND I sorted through some unopened boxes of books we found in the garage (I'm under the 2-year mark, so WHEW!), and so far have refilled one of those boxes with books to be donated to the library!  I CAN DO THIS!!!!!  Honestly, if there's something even harder to give up than yarn, it's books--especially some of my more eclectic books that I know the library will never, EVER keep, but I'm admitting that I'm not going to reread any of them.  This is growth for me.  When we packed up the old house, we found boxes we'd never unpacked in the first place, so I swore we wouldn't do that in this house, and I did actually believe that we had unpacked all the books, so now that we know about them, it's unpack or donate.  We both read so we will always have a library, but we're just being selective.  If I'm going to dust them, they have to be worthy...........