Some Good, Some Bad

Obviously, I've fallen off the radar a bit.  In September, Andy's brother was diagnosed with Stage 4 cancer, and in April we lost him.  He was 57.  Andy did get a chance to see him first, but it's still an overwhelming loss.

We've both been struggling a little with work:  Andy has been working on a huge project that is both frustrating and requires extra hours, and my company brought in a free-lance sales "trainer," who has been condescending, dictatorial, and demanding that we have things like paper "pitchbooks" that were unprofessional and out of date 20+ years ago.  Luckily, the plug is being pulled on that idiot, but it's hard when you have something to really dread first thing every Monday morning.

There have also been good things happening.  We are now finally and legally free of Andy's ex-wife, who has been spiteful and as nasty as possible every chance she's had.  There are lots of posts on my other blog about just a few of the things we've been through with her so I'm not polluting this space with anything about her, but if she ever contacts us in any way for any reason, she'll be slapped with a restraining order. We got to attend graduation without her ruining it or making a scene, which is certainly a first.

The kittens are doing well 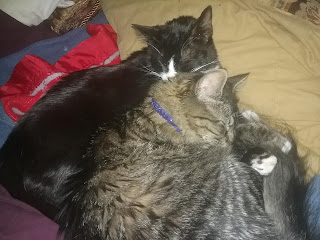 and when not snoozing, are loving watching the birds out of the window.  They're not allowed outside, much to their disappointment.

There's been a bit of sewing, 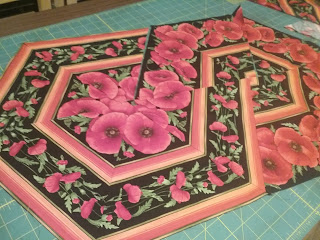 and in spite of all the stress, we still find the fun in life.  Months ago Andy had asked me if we needed a flag from my college to go with all the rival flags going up around the neighborhood, and apparently I told him the only sports team I might be willing to put up would be Griffendor.  So Thursday I came home to find this: 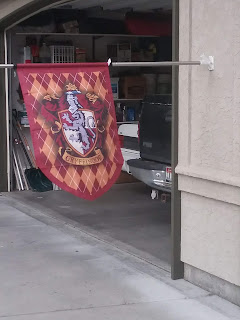 Of COURSE we're keeping it up!  Or maybe moving it to the front of the house for greater visibility.  :)