I've Been With This Cold Longer Than Some Ex-Boyfriends

Yep--the cold and I are still together.  I'm thinking a new bottle of Nyquil for our one-month anniversary later this week.

Last weekend we planted the obscene number of bulbs I ordered months ago when the threat of having to plant them was MONTHS away and meant nothing at all.  Next spring I am just going to turn my credit card over to Andy for safe keeping.  Our yard had better be beautiful come spring, and for hopefully a bit longer than a week or two.

Last weekend we also saw the touring production of The Lion King.  I took a lot of drugs to make it through, but it was great.  If you haven't seen what they did with the Broadway show, this is the opening from the 2008 Tony Awards (the show's 20th year):

After such a busy weekend last weekend, the cold was a bit worse this week and I ended up working from home quite a bit, and have spent this weekend resting with the vaporizer and the kitties, 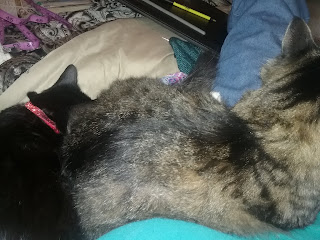 and knitting when the youngsters were sleeping, except for when they slept ON the knitting. 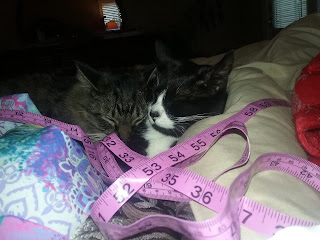 While I am totally in love with the new yarn, I noticed the other day that the fall stashdash goes to the end of November, not October, so I could finish another WIP for the challenge....  (Aren't you amazed that I'm only working on finishing ONE more?  I am)  So, I have been knitting the sleeves for my bulky-weight sweater: 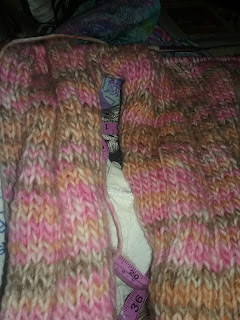 and they're just a few rows from being done.  Why am I thinking only one more project if I'm this close?  Because I have to rip back part of the last piece I finished, which I thought was the back and turned out to be a SECOND back because I don't always take very good notes, so when the sleeves are done, I have to rip back part of the second back and convert it to a front, and it's taken me two weeks to even be willing to admit that.  This is why I should learn to be a monogamous knitter.  Not that I couldn't still do it, but I think it would be infinitely harder to forget what pieces one has knit if the project hasn't been shoved into a drawer for two years....

Thanks to all the embroidered towels, I have managed to hit my 50 Finished Projects goal, but as I used to count 2 embroidered towels as a finished project, it feels a bit like I'm not really at 50, so a couple big finished projects would make me feel better.  I'm thinking next year maybe I need a goal for number of sweaters finished.  I tried once for one sweater a month and got crushed by swoopies, but I think a sweater every 3 months could be perfectly reasonable, so therefore I'm thinking of trying for a sweater ever other month.   Why start being reasonable now?

A Tale of Two Weekends...

First, there was the good weekend, with lots of time for kitties and sewing, 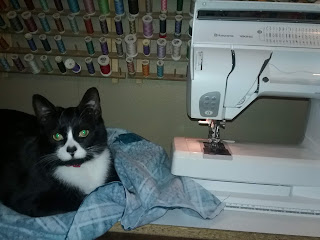 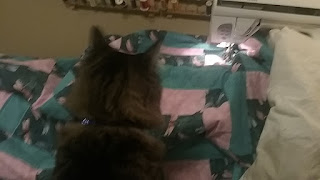 and some quilting with Valentino's help.  He's discovered laps lately, and I think it's as much for the petting as the being in the way of everything--or at least close.  Luckily, Then the bad weekend--SICK AGAIN!  Thursday I had such a bad sore throat that it woke me up, and I spent the day at home gargling saltwater and sleeping to try to make it to some appointments on Friday, but ended up having to cancel.  I was so miserable that I just took Nyquil every 6 hours to either sleep through it or rest enough to get rid of the darn thing.  I didn't even knit until Sunday.  I know!!!!!!  Andy was QUITE concerned, as you can imagine.  The cats loved it.
Posted by Toni at 9:44 PM 2 comments: Links to this post