....and I need to use up another 15.6 yards of fabric before the end of the year to reach my goal of 100 yards for the year.  The part of me that isn't stressing is trying to figure out really big projects.

I've been down with a cold for the last week, so I haven't really done any sewing--or knitting--until yesterday, when I did manage to finish up two new table runners: 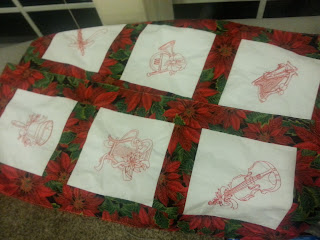 and have two more like it in progress.  Not a lot of yardage, but I had a new embroidery design set to play with (another one).  One of them is being delivered tonight as a 45th wedding anniversary gift, which I hope they'll like.  I think I'll try black thread on one of the new ones to see how it looks--these don't stand out as much as I had hoped.  And when those are done, that will give me about another 1.2 yards--again, not much fabric, but something.  AND, I am twelve days away from not having bought fabric in a year.  These arrived yesterday, 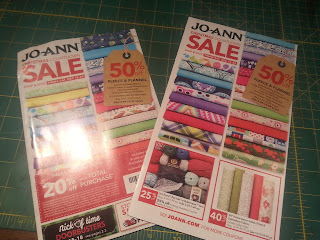 so I think Joanns is missing me or is keeping as close an eye on that date as I am.  I am going to need some neutral cotton, but if I find that, I think I could easily do another year sewing from stash.  Or 10.  Either way.  :)

Andy is out of town this week, so I am Chief Kitty Entertainer for the week, and Theo was very serious about sewing 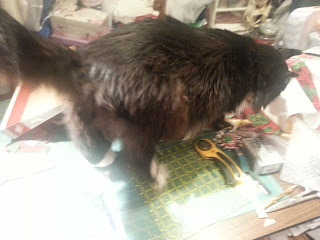 until nap-time got him.  It's snowing outside today, which means none of us are likely to be outside much.  I do have a party to go to tonight, so hopefully the snow stops pretty early--maybe early enough that I won't have to shovel anything?
Posted by Toni at 9:06 AM 2 comments: