What is The Rudest Experience You Have Had When Looking for a Job?

So far my search for a job has turned up THE rudest companies I've ever encountered, and I'm kind of beginning to wonder if it's me.  First, while I was still working, I interviewed with a company called Compassus--a nationwide chain gobbling up hospice companies.  There are websites that review employers, and theirs had been flat-out terrible, so I was a bit hesitant, but the first interview was with a recruiter who was willing to work around my schedule, so I thought "What the heck."  It was on a Monday morning, then the next interview was with a local person that Friday--my day off.  But I went, and I liked that person, but he was unable to answer my questions.  However, he said that there were 2 more interviews, so I thought, what the heck.  The next interview was on my NEXT day off, and the recruiter messed it up--giving the interviewer a different time than she gave me, but she also lined up the 4th interview at that time, so I worked around all of it, doing the 4th interview over the phone AFTER getting off late at the store.  The third interview didn't answer my questions, either, and felt like a waste of time because they were all just first interviews asking the exact same questions.  Finally, the 4th interview DID answer my questions--proving the complaints about the company correct--and she informed me that there were 2 MORE interviews.  Seriously?  Anyway, she was obviously not impressed with me, either, because that was the last I heard from them until 6 WEEKS later when I got an email saying they'd selected someone else.  Really?  I wouldn't have worked that out myself.

Fast forward to the 14th, which was my second interview with the Evangelical Lutheran Good Samaritan Society.  Now here's the thing:  if you are going to spout off continually that your motto is "“In Christ’s Love, Everyone Is Someone," you'd better live up to it.  Simply praying before each meeting just doesn't cut it.  We did a conference call with 2 "consultants," then they sent me out of the room in order to discuss me.  When they FINALLY came back, they still had me fill out a sheet to authorize a background check "IF they decided to move forward."  Now, this form has my social security number on it, so it's not something I would fill out willingly for no reason and which companies should NOT ask for without reason--WHICH IS EXACTLY WHAT HAPPENED.  The job was reposted by Monday, so they knew while I was there that they weren't going to offer me the job, but were too flamingly spineless to say so.  And have I received anything from them thanking me for applying or notifying me?  Of course not, because obviously job applicants are exempt from their little motto.  What total jackasses.  Now I just have to hope that they have the decency to have shredded my information--I do NOT trust them to safeguard my information.

So, the trip to take my sewing machines in was good timing. I needed a break from job hunting, as the most positive experience so far has been getting automatic but polite rejections immediately after applying--how sad is that?

Since both Husqvarna machines were going for repair, I decided not to take the Bernina along to play with--being only able to carry so many sewing machines--so instead I took 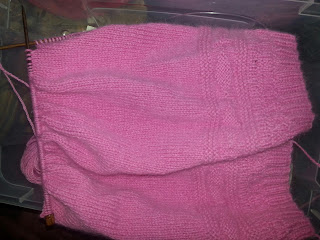 the new sweater, which is coming along nicely.  Why have I never knit with angora before?  This is the pattern, 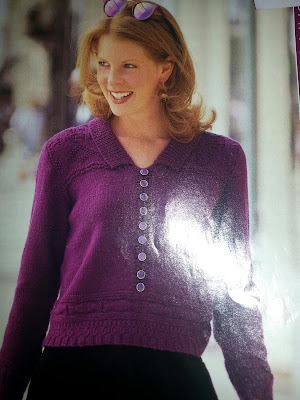 It's called On the Fast Track by Ann Fierst, and it was published in Knitter's Magazine Fall 1998 issue.  Yep, it's been on my to-knit list for a while.  This issue had several great things in it, and originally I'd picked out a different sweater to use with this yarn, but it had cables and with the slight halo-effect of the yarn and the admission that maybe I don't really want more bulk added to my chest, I decided this was a better bet for a sweater I'd wear a lot.  Me Made Monday is KILLING me!  I just keep making these stupidly-responsible decisions like that.  Dang it!

Speaking of which, the drive and then a board meeting on Saturday were a lot for my back, so Monday was actually spent in pajamas, but on Tuesday I dug this out: 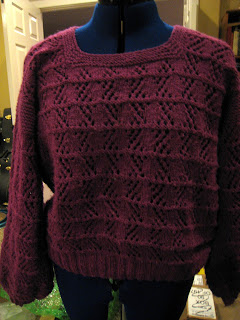 This is a very old sweater made from one of my favorite patterns--possibly as far back as high school or college.  The yarn is a totally horrible acrylic, but some patterns can make even bad yarn look good.  I later redid this sweater in turquoise cotton, 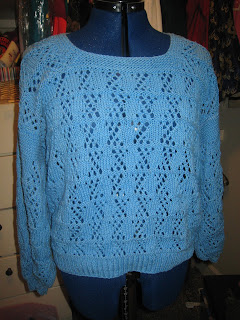 and would probably knit a third in a heartbeat if I had white cotton in my stash.  Maybe another time...

I did do a bit of crafting on Sunday.  Theo also helped me iron the fabric to finish the quilt I was theoretically going to finish during my alone-time 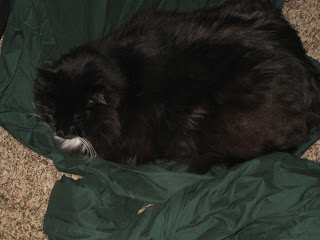 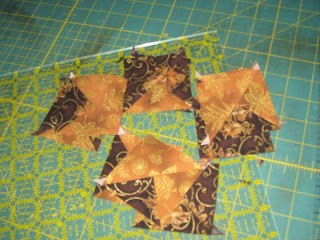 which are now itty-bitty blocks that I'll be sewing together later this week.   And I washed a stash of baby-themed flannel, 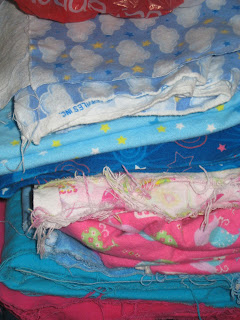 which I have decided to sew into quick, simple baby quilts or get rid of.  Most of it has been in the stash a while, and I think some cute little 9-patch quilts would be nice.  I bought it, I want to use it, so it's now in the queue.

I'll admit, I'm a bit discouraged on the job-hunting front.  Until now, I can honestly say that companies used the interviews to make sure the employee wanted to work for them AS WELL AS making sure they wanted the employee.  But between Compassus and the Good Samaritan Society, I am totally appalled.  If this is how they treat people during interviews,  I can't even imagine how rotten they are to work for.  I suppose it's a lot like online dating--when I first joined, it was only the really awful people who contacted me.  But after a while, I started meeting really great people--even when we didn't click.  So maybe if I just keep telling myself that these companies were the "Cowboy Bob (long story)" of the job-hunting world, I'll be motivated enough to keep looking for the Andy.  Let's hope.......