Whew! The Week That Was

This week I had Wednesday off instead of my usual Friday because the piano people at the main store were attending training, so I filled in for them on Thursday and Friday, as well as filling in for the audio person on Thursday and the guitar guy both days.  It was like a music pop quiz.  We were so short-staffed that I didn't get to leave for lunch, which was a bit disappointing because.....

My faithful Jeeves is having problems again.  First it was not being able to tell the difference between needing a new thread color and having an empty thread or bobbin, but that was workable.  Now it's stopping repeatedly during a design saying he's out of thread when he clearly isn't.  This is all fixable (probably), but my embroidery software can't run on a computer system newer than Windows XP.  Microsoft, of course, hasn't supported XP for years, but personally, I've never found Microsoft's "support" to amount to anything anyway.  Now, however, both Chrome and Firefox are going to be dropping XP, which IS a problem as now any new embroidery designs are downloaded rather than sold on cds.  On top of the card reader and cards having problems.  Jeeves and I have been together 10 years now, so it's a big decision and I actually will keep him as a sewing machine because he isn't worth anything as a trade-in and the machine I sew on most is the next one down in the series and I might need some parts.  So, I had planned to spend my lunch hour (probably both days) looking at the Berninas nearby.  Which made me feel tremendously guilty for just thinking about it, so yesterday Jeeves and I spent some quality time together.  I finished the embroidery on the next Christmas table runner, 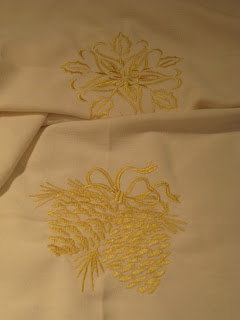 this time using the same design on both ends (the pine cones) and water-soluble stabilizer on the back so it would drape a bit better after washing.  Then we used the other new design set, 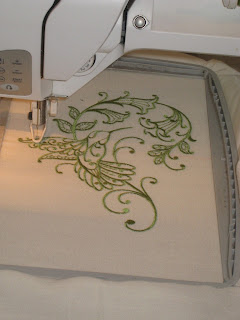 to make a not-too-girly spring runner.  The threat of replacement seems to have frightened Jeeves.  He still had issues with stopping and starting, but fewer.  Poor Jeeves.

While he was doing that, 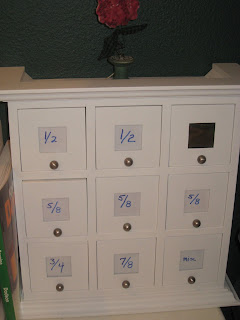 we found this at a thrift store several months ago, and Andy touched up the paint for me because it was a bit scuffed.  I had been thinking that I needed to do something a bit better with my button stash when we saw it, and it really is perfect--or would be if I hadn't had to cut the tops off of all the cards to get the buttons to fit.  Oh well, it's perfect NOW.  I still have another container of buttons, which will get the remaining drawer as soon as I find them, but that frees up some space in my shelves, and 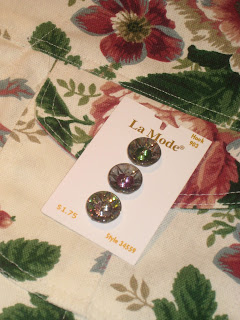 it prompted me to FINALLY decide which buttons to use on this jacket which has been finished for quite a while but which I haven't worn yet because I'd never put buttons on.  I had been disappointed to not find the same buttons I'd put on the one I lost, but 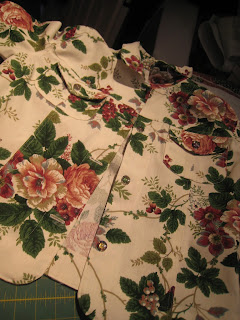 I think these work nicely AND I'm going to wear it today for Me Made Monday.  That will make my 10th new thing for the year and I haven't even gotten to the shawls and scarves, so I think I'm doing reasonably well.  Of course, the crazy-hot days are coming, so things might get a bit creative in the next few months, so I'd better get back to sewing clothes.  Which means, of course, that I worked on table runners. 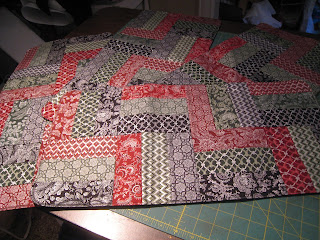 For my excuse, I'm going with "it's easier better to finish them than find a place to store them."  Sometimes excuses can actually be true.  I got three more done, then I did break out the jacket I've been wanting to start for a while, 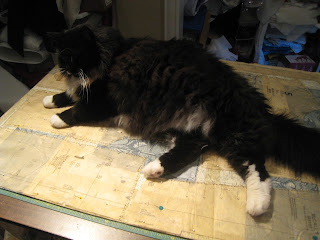 and even got half the pieces pinned and one even cut out before my furry little helper arrived.  I tried to just work around him 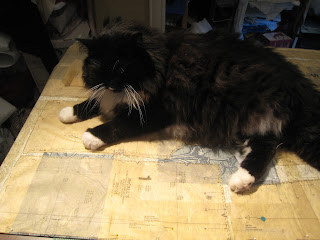 but being a very determined sort of cat, he just kept getting up and moving to where he would be most in the way.  Which is why I worked on this 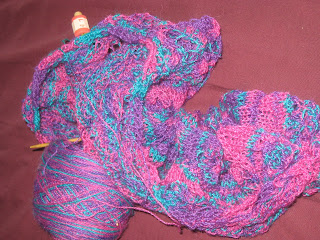 for a while instead.   Theo really is having a hard time with me being back to work, and Andy went camping over the weekend, so things were very tough in Kitty World.

I have now used up (or given away) 61.775 yards of fabric for the year, and with giving away the terry cloth, there really IS more space in the sewing room, so I'm very excited.  Last weekend Andy hung my Valentine's day gift for me: 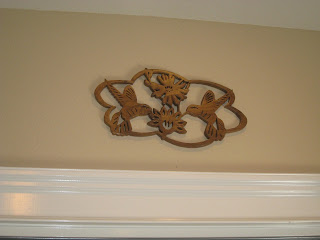 so while my sewing room will NEVER look like those cute, spotless little ones I keep seeing on Pinterest, it's getting better.  The fabric I'm trying to cut out now is definitely one of my oldest ones, so that makes me feel good.  The embroidered table runners are from fabric I specifically bought for embroidered table runners and even though I still had that pesky little voice saying, "maybe I should find something better to do with it," I'm committed and I'm making all 3 yards into table runners and it will be ALL GONE and that will be okay.  The oval table runners are from a jelly roll I bought because it was on sale even though I had no idea what to do with it or if I would even LIKE working with precuts, so it had a really high probability of becoming long-term stash, so it's nice to use that up.  I finally got over my paralysis-by-analysis and put buttons on a jacket that had been finished in 2014 and I can now wear it.  And it's been 169 days since I last bought fabric and 335 days since I last bought yarn.  I'm feeling so good about my crafting that I might even have to dig out that glue gun for another round this evening...........