The pants are finished except for adding the elastic, which puts me over 45 yards so far for the year, and as my friend, Gaidig, pointed out, I didn't start trying to reach 200 yards until February, so being a little short this quarter is okay.

The jacket is just down to attaching the sleeves and the narrow hem around the entire edge of the jacket, so it could still happen as well.  The tank top is pretty simple, and I've attached the facing (which I'd be showing you except black on black on black looks like pretty much nothing) for the neckline, but it's going a bit slower.  But I'll either get one more thing done by the end of the month or have two early projects finished next month. And without solving the question of whether my records are wrong, or if there is also a 6-yard piece of this fabric lurking somewhere in the sewing room.  Let's call it a secondary goal to know what's actually IN my fabric stash, shall we?

Yesterday was Me Made Monday, and I did indeed wear things I made:  years ago I made the same pattern I'm making now out of a heavier fabric, and the pants do that dreadful corduroy "whoosh-whoosh" when I walk, and the tank top is so large that the straps are constantly sliding off.  Lesson learned on THAT project:  don't cut patterns on the fold of a fabric that is too resilient to fold flat. With this charming ensemble, I wore my very first project from my very first year of Cold Sheeping back in 2008: 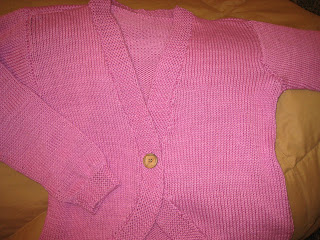 This is the picture from when it was first finished.  It now looks 300 years old.  I used Knit Picks Shine Worsted, and between the pilling and leaving Pepto-Bismal fuzz everywhere, it is by far the most disappointing yarn I have ever used.  It's soft, but that's about all that can be said for it.  But I thought it topped off the disaster ensemble rather nicely.............