The dress is almost done: 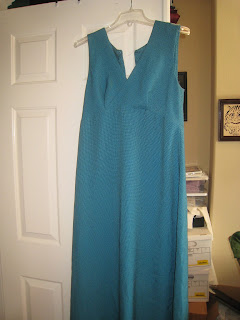 So close, in fact, that I have decided I can count the yardage but not the finished object yet.   The only thing missing is the zipper, which I did insert, and then hated how it looked so ripped it right back out.  I've never been really happy with the way zippers look on things I've made, so I have decided that it is time to try the couture method:  put the blasted thing in by hand.  It HAS to look better, and considering the time I've already spent on this, I don't think it's going to be much slower.  I have started it, so I'm not too worried about it getting set aside in Project Never-Never Land, so I feel okay adding the 2.375 yards to my tally.

That left me with sewing time but nothing else in progress, so I decided to try out that kimono pattern with what was left of the dragon-print fabric.  It's really poor fabric, and the remaining yard has flaws like this: 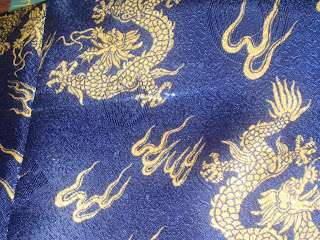 which are REALLY obvious in person, so it was perfect for a trial-run.

Here's a little tip for you:  Unless there is a DARN good reason, it would be easier to insert sleeves onto a garment while they are flat.  And if I ever make this pattern again, I'll be changing it.  I did get it made: 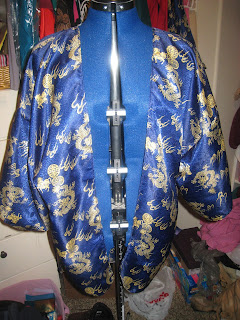 complete with TWO holes where I ripped the fabric, lots of fussing to get drop sleeves inserted into a pattern without marking, and a slight tic above my left eye.  It is a yard used up from the stash.  This is what we're focusing on right now.....

I'm continuing my shelf-by-shelf tidying efforts, and because of this: 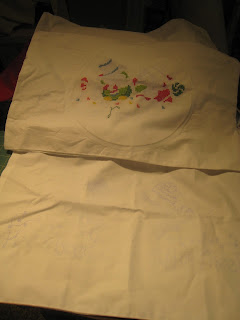 I decided to tackle the shelf holding my stamped cross-stitch kits.  I keep needlework by my bed so that when my back is bad, if my hands are tired from knitting, I have an alternative.  HOWEVER, three months spent with a vaporizer shooting out steam by my bed, and 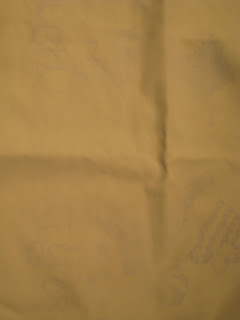 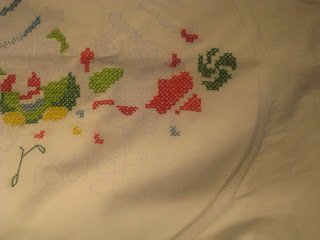 the ink has disappeared from one pillowcase entirely, and at least half of the other one.  Had I been farther along--or liked the color scheme better--I'd be really upset at this, but as it is, I'll rip out what I've done and machine embroider something on the pillowcases instead.  Not a total loss, and considering 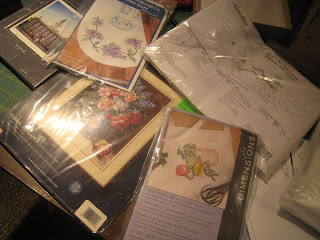 I actually have a STASH of kits, that will probably speed things up.  I did pick out a new kit to work on, 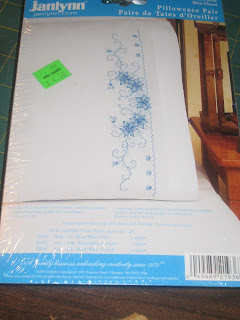 which has been around at LEAST 10 years because I don't shop at Walmart anymore, and I had obviously decided on a color scheme I liked better: 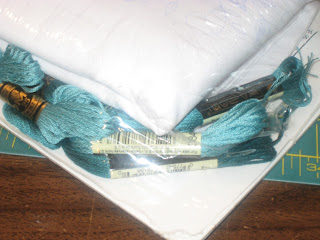 so I have a new project to work on.

The kits share the shelf with my machine-embroidery-ready stash, which I haven't sorted through since Andy built the shelves.  For unknown reasons, 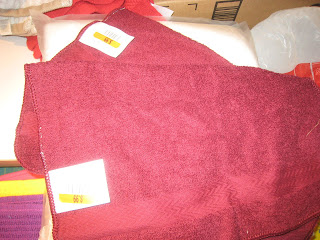 I had several washcloths in there.  I like to machine embroider, but towels are one thing.  Washcloths are quite another.  Presumably, one is going to wash something with a washcloth, and embroidery will only get in the way AND fade like crazy--if it doesn't rip out.  So we have some new washcloths.  I also found 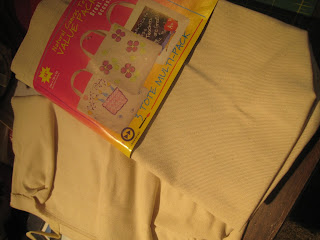 which I bought LONG before discovering that in order to embroider on pre-made bags, I basically have to take them apart.  What's not fun about that?  I do always like the end result when I use these, but I'm glad these are the last 3 in my stash.  I have a couple new embroidery designs that need heavier fabric, so I'm going to wash these and maybe get them all used up.

I also found quite a stash of rope in the shelf: 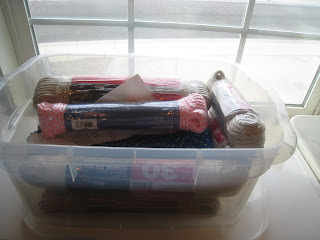 which is nice.  There's a pink and white that I think might make great lollipop ornaments without having to mess with fabric--that would be really handy.  And they're now together in a bin so I will remember that I don't need any MORE rope for quite some time.

At the very bottom of the shelf: 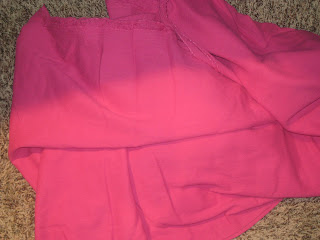 I found 5 yards of pink gauze fabric.  No idea why it was in that shelf, but thanks to Robin and Kathleen C. helping me out with the gauze question, I'm kind of excited about this find.  I would live in gauze in the summer if I could, and apparently I might have stashed enough of the stuff for it to be a reality by next year...:) 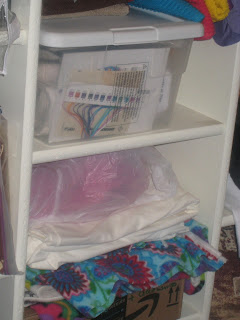 and my sewing table was STILL clear enough after my tidying for layout out fabric! 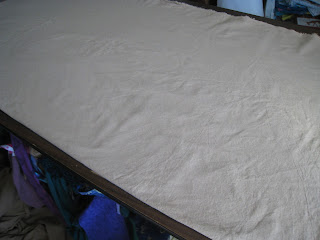 This is the fabric for Andy's 2014 birthday gift, so the push to get it done before I'm two years late has outweighed my desire to start something that would use up more than 4 yards of fabric with less sewing, or something idiotic like a quilt that would take a great deal MORE sewing.  I'm flexible that way.......