And We STILL Don't Have Valentine Shirt

But we do have a finished shirt for Andy, 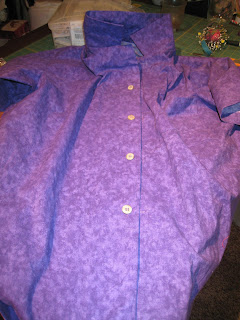 and you KNOW you're serious about finishing a project when you carry on through bloodshed: 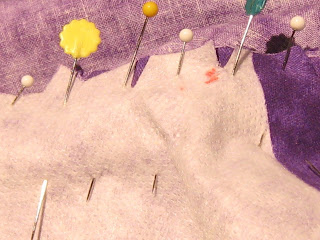 Being me, I have had to get fairly good at getting bloodstains out of clothing, but bloodstains on clothes that aren't even finished is a new one even for me.  Luckily, it was just on the interfacing, so it isn't going to be a problem.  AND another 2.5 yards of fabric out of the stash!

Normally, I might unwind at the end of the night with a book, but now that I'm obsessed with 200 yards, I started cutting the wedges for the table runner Monday night, finished them up Tuesday morning, 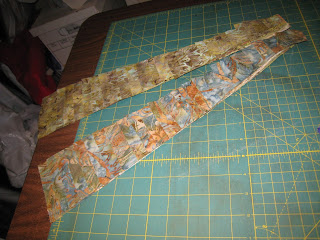 had them all sewn together by Tuesday afternoon, 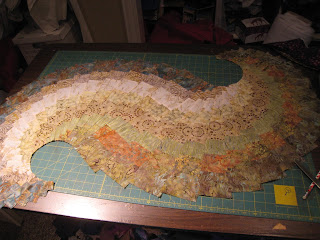 and spent this morning finishing up the runner with a speckled-green top-stitching: 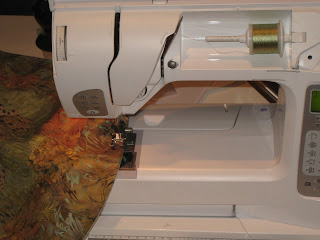 Another two and a half yards out of stash, putting me at just over 19 yards of fabric for the year--which FINALLY puts the stash where it was on December 24, before that one last online "hurrah" purchase.  A few minutes on line = 7 weeks of frantic sewing.  This explains a great deal about the fabric stash, doesn't it?

On Saturday we went snowshoeing, which was harder on my hip than cross-country skiing, so I've been a bit more sore this week.  Tuesday we went for a 4-mile walk, including some on uneven ground, which irritated my hip a bit further, so the sewing yesterday and today is sort of to keep me out of trouble.  As long as I have things planned, I don't mistakenly lift or pull anything, which is what I have to avoid right now.  So, last night, I got the strips pinned to start sewing the NEXT spicy spiral runner: 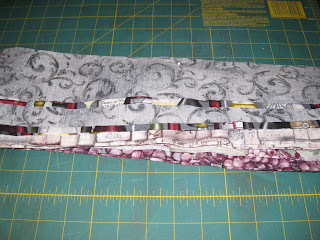 as well as locating this, 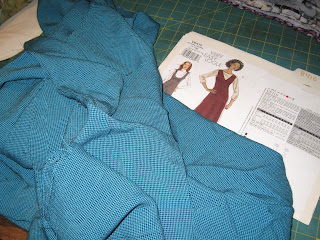 which is a dress MOSTLY finished from 2-3 years ago.  It's a pattern I've made before, it's fairly easy, and heaven only knows why it got set aside, but when it's finished, I'll be able to chalk up another 2.375 yards for the year.  Yep--I've gone completely stash-mad, and in the opposite direction I usually am.

All this sewing hasn't left a lot of time for knitting, which the Knitting Gods appear to have noticed.  This 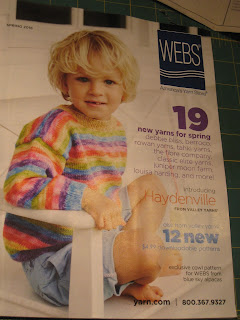 came in the mail yesterday. Not taking any chances, I rushed it to the recycle bin, though I think I might have been safe.  They clearly haven't gotten desperate yet, as the words "closeout" and/or "free shipping" were not included, but it is early in the year.  Still, I might do a bit of knitting tonight, just to appease them.  We all know who normally wins this battle.............