Santa made a surprise appearance at the Château last year, bringing Andy an acoustic parlor (smaller body) guitar and  me a 12-string, so there has been a lot of music here this year—and more than a few discussions about how many guitars two people actually need, though these discussions are quickly scrapped when either the sewing room or the third bay of the garage known as the Wood Shop are mentioned.  No one, however, is allowed to take up the tuba.

Andy has always been interested in photography, and this year purchased a better digital camera to play with.  On one of the first outings with a camera, while Andy tried to get just the right shot of a goose with her gosling, I fended off another goose, presumably her agent, who wanted to A) bite, and B) talk royalties.  A day on the motorcycle with the camera has become a favorite weekend activity for him, and over Thanksgiving he took some wonderful pictures of my aunt and uncle and their family at the ranch, so it's really been a fun hobby for everyone—except perhaps that goose.

The garden and I had a decent relationship this year.  Lousy tomatoes, but truly exuberant cucumbers, which worked out rather well as I was running low on pickles, and we valiantly defended the pumpkin plant from the squash bugs after learning that planting zucchini as a decoy didn't work.  I actually planted two zucchini, for reasons I no longer remember or even understand, and believe me when I say that zucchini-carrot jam didn't sound remotely strange after everything else we made, though other people do seem to find bits of vegetable on their toast a bit weird.  Go figure......

The ongoing hip/back issues continue to dominate my life, but my biggest news is that my physical therapist said I don't need her anymore!  While she's still on speed-dial in case of “mishaps” or “over-optimism,” I continue to make progress.  Some activities are forever off-limits (certain types of lifting), but most things are probably possible.  The best approach is to try something in a small amount, see if my hip is stable, then gradually increase the time or try a new exercise for stability.  Of course, the approach I usually use is the “dive right in” version, which really backfired with my attempt at lawn mowing.  I think the straight passes were fine, but I hadn't thought through turning around.  We'll start smaller next year.  It will never be fixed exactly, and sitting will always be difficult and best avoided, but the daily exercises and stretches are helping me control it and I'm starting to get back to what my therapist describes as “half of a normal life.”   Though I'm not sure we've ever managed a “normal” life anyway, I am hoping to continue to make progress and regain whatever passes for a normal life for us.

In fact, I have made so much progress that we did a little traveling this year:  In February, we visited Andy's parents in California, then met up with most of his family in June in Colorado for a wedding reception and trip to the Colorado Renaissance Festival.  Then in October it was off to New York to attend our first Italian wedding—a wonderful event stretching 3 days and involving lots of celebrating, dancing,  and enough food to have amazed either of my grandmothers--which is saying something.  We also visited the Statue of Liberty and revisited Ellis Island, Central Park, and the Metropolitan Museum of Art.  We also discovered a brilliant Italian market where one can buy a glass of wine WHILE grocery shopping.  Idaho has much to learn.....

We close with a picture of a costume dinner we attended—Andy and I doing our best Cary Grant and Sophia Loren impressions.  Hey, we can always dream............... 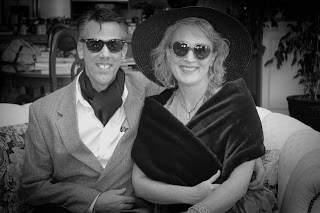 Things we have learned this year:

* Unless you're a real free-thinker about oatmeal, it's best to not keep the cinnamon right next to the taco seasoning
*  “I'll just pop in to Costco on the way” might be the silliest thing I've ever said on a Friday afternoon.
* It's amazing what a sense of victory it is to only get slight burns when attempting to use a glue gun.
*  We've replaced a lot of appliances, but I'm still grudgingly impressed when a coffee maker can find an entirely new way to break—like having the automatic grinder start randomly going off whenever.  I have a soft spot for creativity.
* Dried dates burn much faster in the microwave than one might think.
*  It's a mark of human optimism that the word “zucchini” even has a singular.
*  Those who joke about their cats being “senior kitties” are going to spend 45 minutes catching the mouse let loose under the Christmas tree skirt.
*  Sorting boxes is fairly easy by now—if we haven't seen it in 9 years, it probably isn't necessary.
*  Cats with stress issues are a leading cause of humans with stress issues.
*  I had sort of assumed that by the time I reached my 40s I'd be able to stay clean for an entire day.
*  One might never have too many tomatoes, but one can definitely have too many green beans
* Stocking up on Christmas cards after Christmas was a great idea.  Remembering where I put them would have been brilliant.
*  Three years later and my cheekbone can STILL find more features on my smartphone than I can.
*  When it's over 100 degrees, I am not to be trusted with questions like, “how short would I like my bangs?”
*  Ants can move surprisingly fast when one has just dug into their home.
*  We didn't receive a single seed catalog this year.  It seems my fame has spread.........
*  Admitting that one is never actually going to reread Dostoevsky is very freeing—and clears up bookshelf space
*  Begging seems to help when trying to convince the computers and printers to all play nicely.
*  When the garden is in full swing, there's no such thing as a small salad.
*  I do not know a curse strong enough for the wretches who came up with the cherry-flavoring for Robitussin.
*  Reading glasses tend to work best when one can find them.
*  Fast for two weeks before attending a 3-day Italian wedding—and two months afterwards.
*  Getting an extra month of gardening does not necessarily translate into an extra month of interest IN gardening.
*  No matter how hard one might try to enhance the color of a photo, some of us really are just that pale
*  It turns out the SMART thing to do would be to see if one can actually open a finished project—for instance, a wooden pepper grinder—before mailing them all out as Christmas gifts.
*  If you have sent out Christmas gifts that no one will be able to open, you can tell when each one is opened by the phone calls looking for instructions, help, or possibly a can of spinach.
*  Nothing inspires the misbehavior of a furnace like a 10-degree morning
*  Taking turns making Christmas gifts generally works out well, or would if either of us were at all realistic about the time required to make things.
*  You can't out-stubborn a cat.
*  Buying “Happy Holidays” cards works out well for those of us who might not get them out before Christmas.

Wishing you a wonderful holiday and a healthy 2016,
Toni & Andy