The good news:  The grey scarf is done. 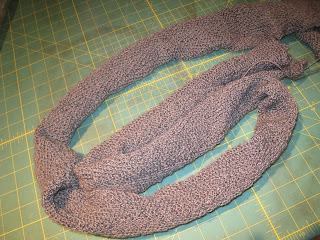 The bad news:  it rolls BADLY.  I altered the pattern to include 2 rows of seed stitch on the sides and to eliminate the dreaded tubular cast-on, so for a while I was kicking myself that my version had somehow caused the rolling, but I started doing Elizabeth Zimmermann's sewn bind-off on the maroon one, and it is rolling as well, so it's just the pattern.  I'll block them severely, but blocking never stops rolling due to how a pattern is done. But it's too late to do anything about it, so I'll just hope they like tubular scarves.  I bought the yarn because it was a silk blend with lovely drape, but I might add a scrap from my washaway stabilizer (which is starch) to minimize the rolling a bit. 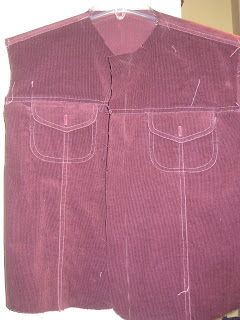 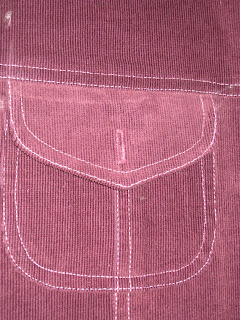 the top-stitching is looking pretty messy when it crosses over the wales of the corduroy.  I think a second row of top-stitching will even it out, but reinforced stitching would also make the pockets (you know, the ones that will be right over my breasts) a bit of a focal point.  Maybe I should finish the rest of the jacket and see if it still bothers me?  I'll admit, if it's something that doesn't show, I can accept "close enough," but I do hate seeing errors.

At least there has been one VERY big (and surprising) crafting victory: 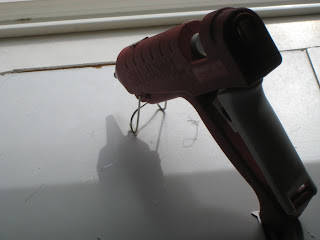 Instead of using fusible webbing and the iron, I used my glue gun on Sunday to make 8 more kimono ornaments, 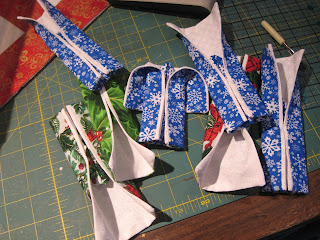 and ended up with no major burns!  Usually the only time I can manage such a feat with the glue gun is when it isn't plugged in.  Frankly, I like the finished items better when done with webbing rather than glue, but this was certainly faster.  And it got me two quick finished projects to count, and considering I still need 34 finished projects before the end of the year, this is my favorite part.....

I wonder how close I have to get to missing my 115-projects goal before I'll willingly dive into the WIPs bins--which is sort of the point of such a goal in the first place............?