Today is our 9-year wedding anniversary.  Hard to believe it's been 9 years already, but that's a good sign.

We always exchange perfume and cologne for our anniversaries, though rarely actually on the day.  We've been very, very late a few times, so this year we picked them out early for a change.  In February when we were down visiting Andy's parents, Andy and I went to a mall, and since I actually heartily dislike malls in general and try for once-a-year visits at most, we decided to pick out scents while we were there.  So, the nine-year fragrances ("artistically" arranged with a dusty engagement photo and some birthday flowers): 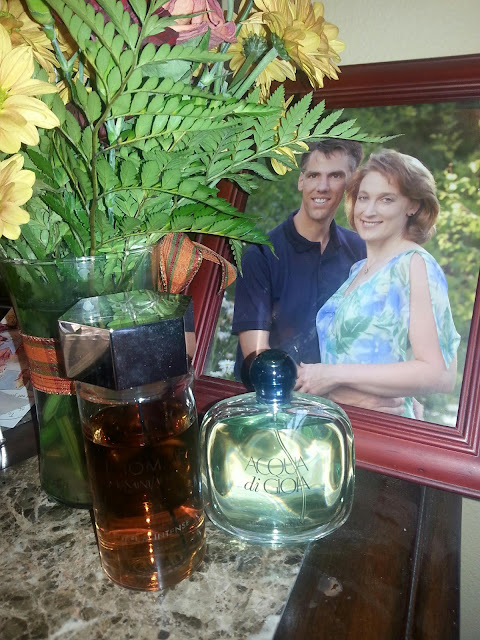 For Andy, L'Homme by Yves Saint Laurent
For me, Acqua di Gioia by Giorgio Armani
For the credit card, life support, as fragrances have just about doubled since we got married.

These are actually our 10th fragrances, as we exchanged them as our wedding gifts to each other, and it has been a really fun idea.  I can't remember where I got the idea, but it's really nice to have "themes" for gift-giving.  We do birthday, anniversary, Valentine's and Christmas, and I think finding new ideas 4 times a year might be getting a bit difficult by now, but with scents for anniversaries and home-made gifts for Valentine's day and themes (usually "hobbies") for Christmas, it's stayed fairly easy to come up with gifts--though as I still haven't finished the summer clothes for Andy's birthday last year and there's a Valentine gift for me that might never make it OUT of Andy's "project time-out bin," there are snags in the system once in a while.  But boy, do we smell good!  :)