Whew!  Just a crazy, crazy, crazy few weeks.  Aside from getting ready for the trip to Colorado, Andy's parents were stopping by here on their way home from Colorado, so there was some pretty massive cleaning.  And with temperatures well over 100, there was a lot of mulching and watering and weeding to keep the garden alive.  It turns out there had been a mix-up with dates, so they arrived a day earlier than we expected.  It worked out fine, but instead of having everything all ready, my mother-in-law pitched in and swept the floor for me while Andy put the sheets on the guest bed.  On her first visit, Theo put a dead mouse in her shoe, so we're just going to be the weird house.  :)  Luckily, everyone is pretty relaxed so it turned out fine.  And no mice were involved in this visit in any way, so that's probably a step up.

I had planned to spend this week sewing as I'm going to make a shirt for Andy for his birthday this year and it's in 6 days.  Unfortunately, my hip had gotten a bit twisted again and that's a pretty painful process to go through.  So, when I have been able to be up and around, 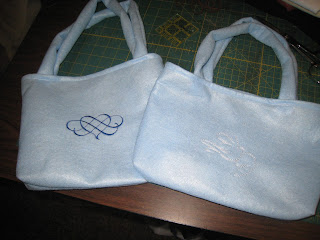 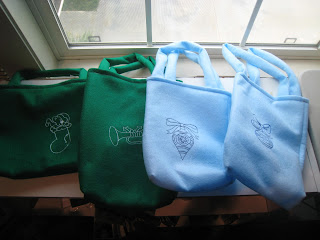 I have been finishing up the felt gift bags which are currently occupying the space on the crafting table, 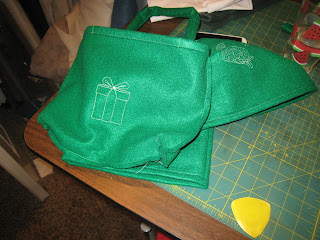 and with the last 2 will have finished 12 bags and cleared up possibly enough space to start cutting out fabric today.  A shirt in 6 days--easy, right?

Sometime during the last few weeks the website that was hosting my cute little Cold Sheep ticker went kaput, so I think I reached 6 months back on the sheep on July 6.  YAY!  And that night I heard from two of my closest friends that they are getting married in October, and could we come to the wedding.  YAY!!!!!!!!!!!!  I've known them forever, and they were so great during our wedding that I want to do something REALLY special for them, and none of the table runners would quite go with their house as it's one like you would see in an architectural magazine.  They're both men and quite the snappy dressers, so I decided to make them really nice dress scarves for their wedding.  Which meant stepping OFF my sheep to get some new yarn.  I swear it wasn't just a good excuse--they've been friends of mine for so long that I've already made them personalized Christmas stockings, a chalkboard runner, and they've received several wooden pens.  It was scarves or a quilt, and I just didn't think I could pull off a quilt in time.  So, 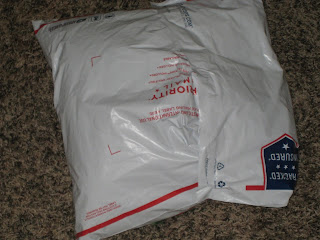 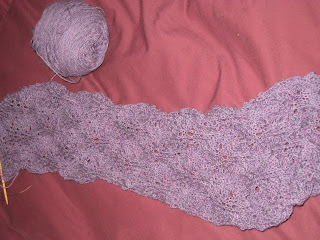 the lace scarf I'd started for airplane knitting, and which has been "Ow, my hip hurts so I need to lay down" knitting this week.  I cast off this morning and will probably steam-block this one 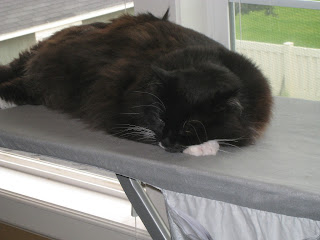 as soon as I get my ironing board back.  Normally in the summer Theo is mostly out in the backyard, but with the traveling, company, and the obligatory several days of neighbors shooting off illegal fireworks, it's been a tough few weeks for the kitties.  I even had a sidekick most of yesterday, 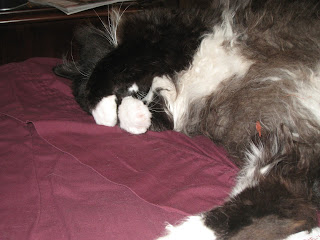 though he seems unimpressed by the speed-knitting going on.

An interesting thing about ordering yarn in July:  it's hard for even the biggest addict to get TOO excited about ordering wool when it's 100 degrees outside.  Really, 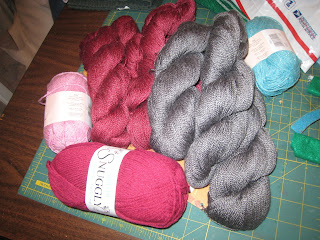 When I step back onto the sheep, I want to go for the three-year badge, so I'll be rounding up a few things this month then, with any luck, will start Cold Sheeping again August 1.  I'm thinking it will be a bit easier to hit my anniversary dates when my desire for wool is at it's very lowest.  January is rough--I'm in the mood to make Christmas gifts for the following year, it's cold, I'm wiped out from all the parties, and it gets dark at 5:00 PM or earlier.  This is the new plan.  ALSO, I'm thinking of getting a bit of sock yarn and NOT listing it on Ravelry, so when my willpower gets low, I'll have new yarn that I won't probably remember, and can pull out a brand new ball of yarn without stepping off my sheep.  I think this could work.  Of course, I also think I can make 2 scarves on size 2 needles in about 3 months.  And have I mentioned the quilt tops recently.....?