George Has Been Safely Caught And Relocated

Did I sound at all freaked out that there was a mouse under the bed?  Well, it got worse--he got into my closet! 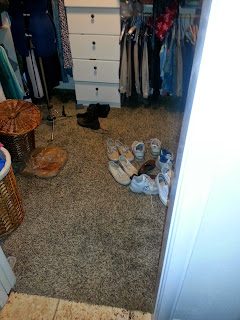 I am not a bold or exhibitionist sort of person, but if it came down to getting clothes out of a closet containing a mouse or going naked, going naked would win--believe me.  I made an unsuccessful dive (which will NOT be mentioned to the physical therapist) to head him off, but I am not the mouser I once was.  Andy stopped what he was doing and we went ON THE HUNT.

Armed with a cardboard box and a plastic lid to slide under it, we found he had taken refuge by one of my old tennis shoes, so Andy slammed the box down over the shoe, slid the lid underneath it, and we hustled downstairs and outside only to find that we'd captured a sheepish-looking old nylon.  Gathering up the shoe and the old nylon, we tried again.  He darted into another part of the closet, where we caught an old hanger.  And the petticoat to my wedding dress got a lovely airing out on the front lawn.  Finally we changed tactics and boxes: 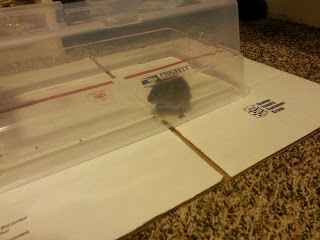 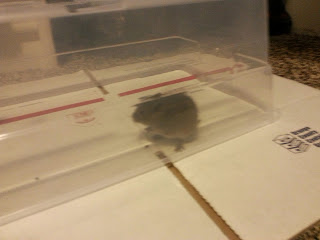 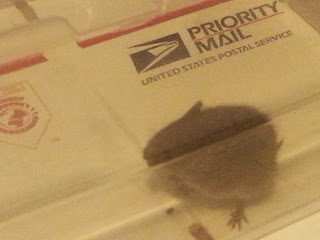 and finally captured George, who is obviously an Olympic athlete of the rodent set.  We opted to skip the fanfare, but it took us so long to catch him that Andy and I both walked out into the nearby field to introduce George into a new vole colony.  I'm sure I'll be spending subsequent years trying to drive George's offspring out of my garden, but at least the house is rodent-free...........for now.