Which is more of an accomplishment than you might think.  Immediately after bragging about my bravery yesterday, I seared my index finger with the new mini-iron Andy gave me for Christmas, 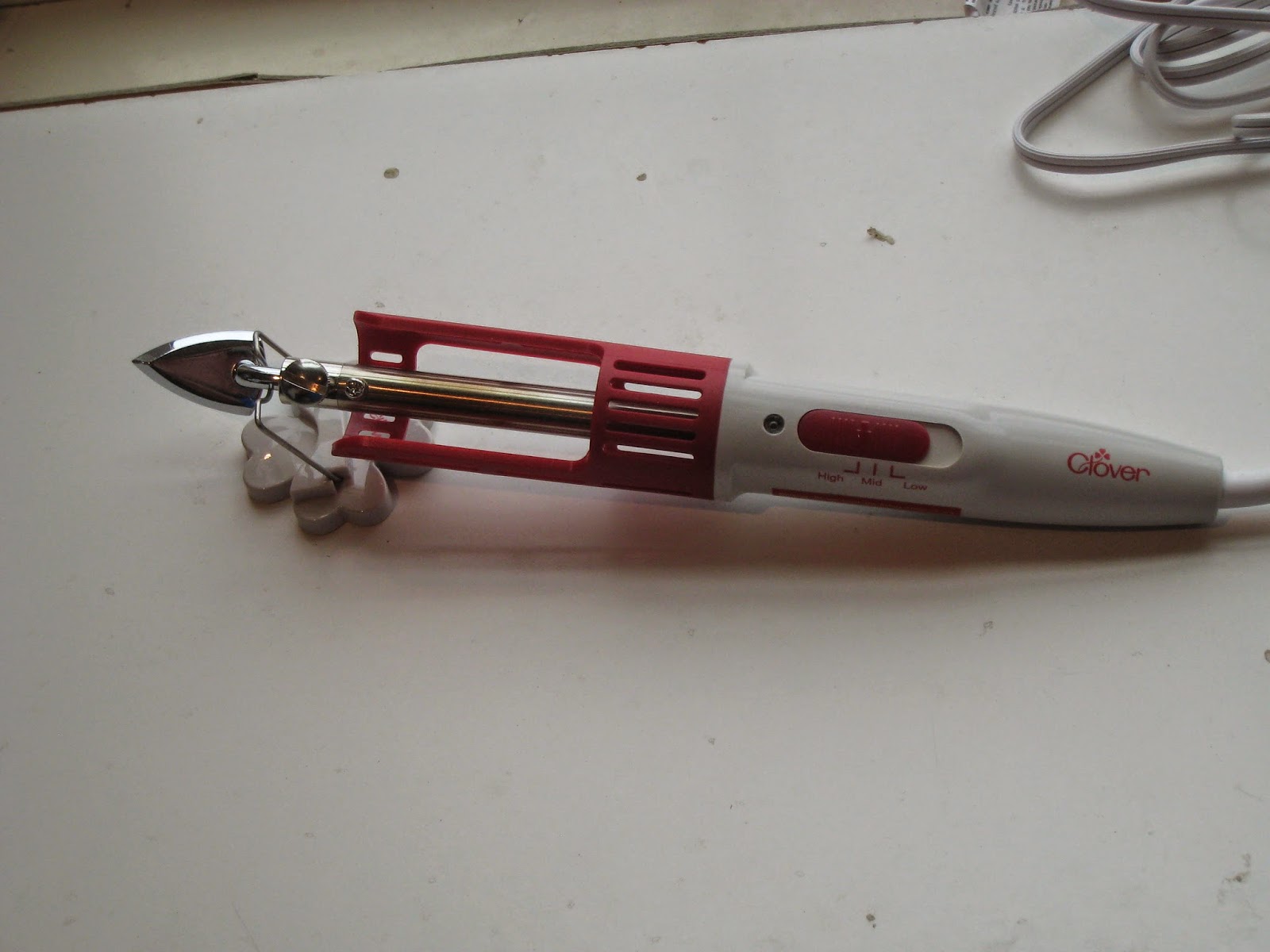 which I thought would be perfect to use to baste the runner with some bits of fusible webbing.  And it might have been, but it's really hard to operate with a throbbing finger.  And even if I had wanted to, the runner had developed a furry problem: 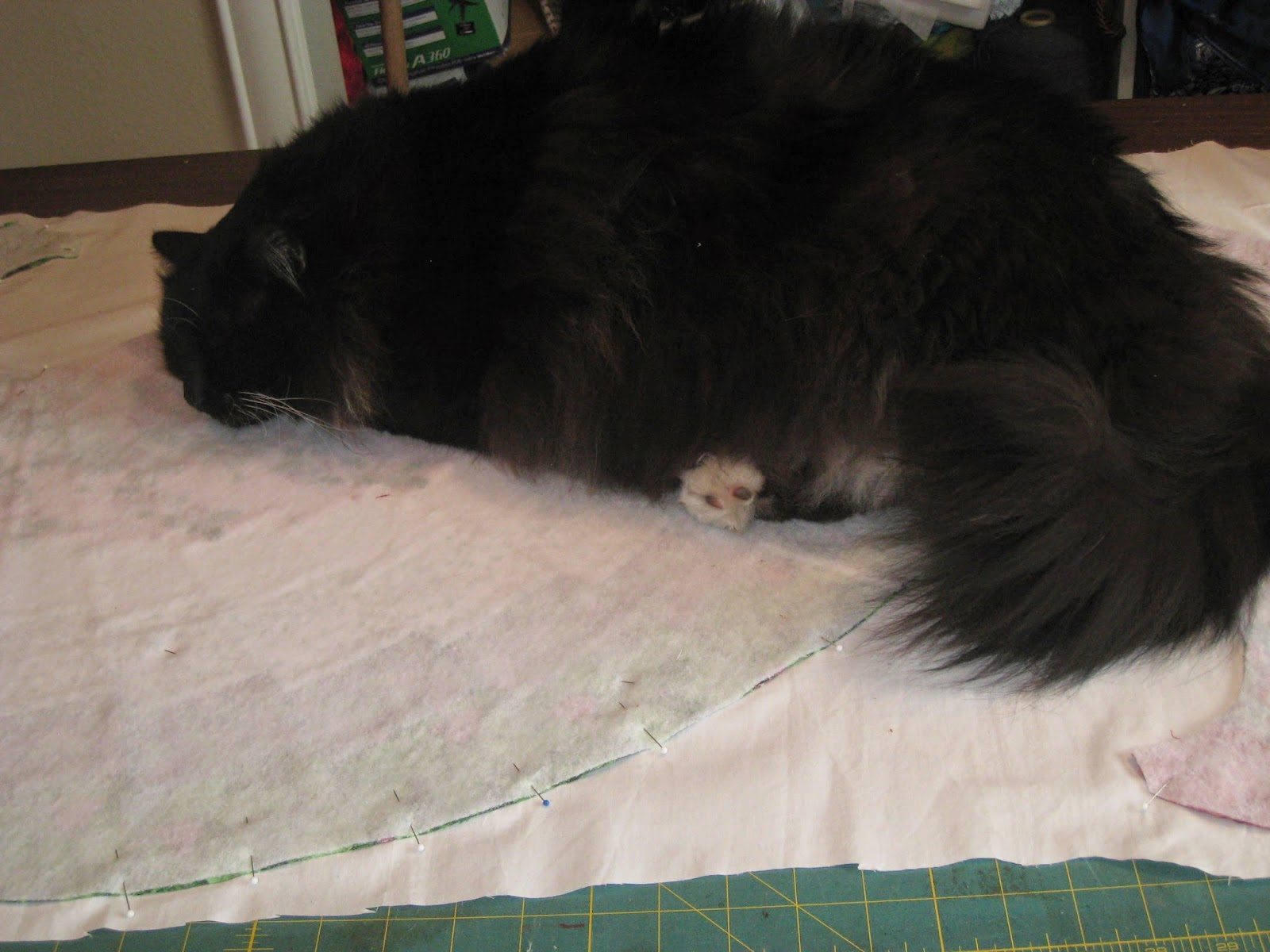 This morning--not to lose my imperfect streak--while trimming off a spare thread, I managed to snip the top of the table runner AFTER sewing the backing on and turning it inside out. 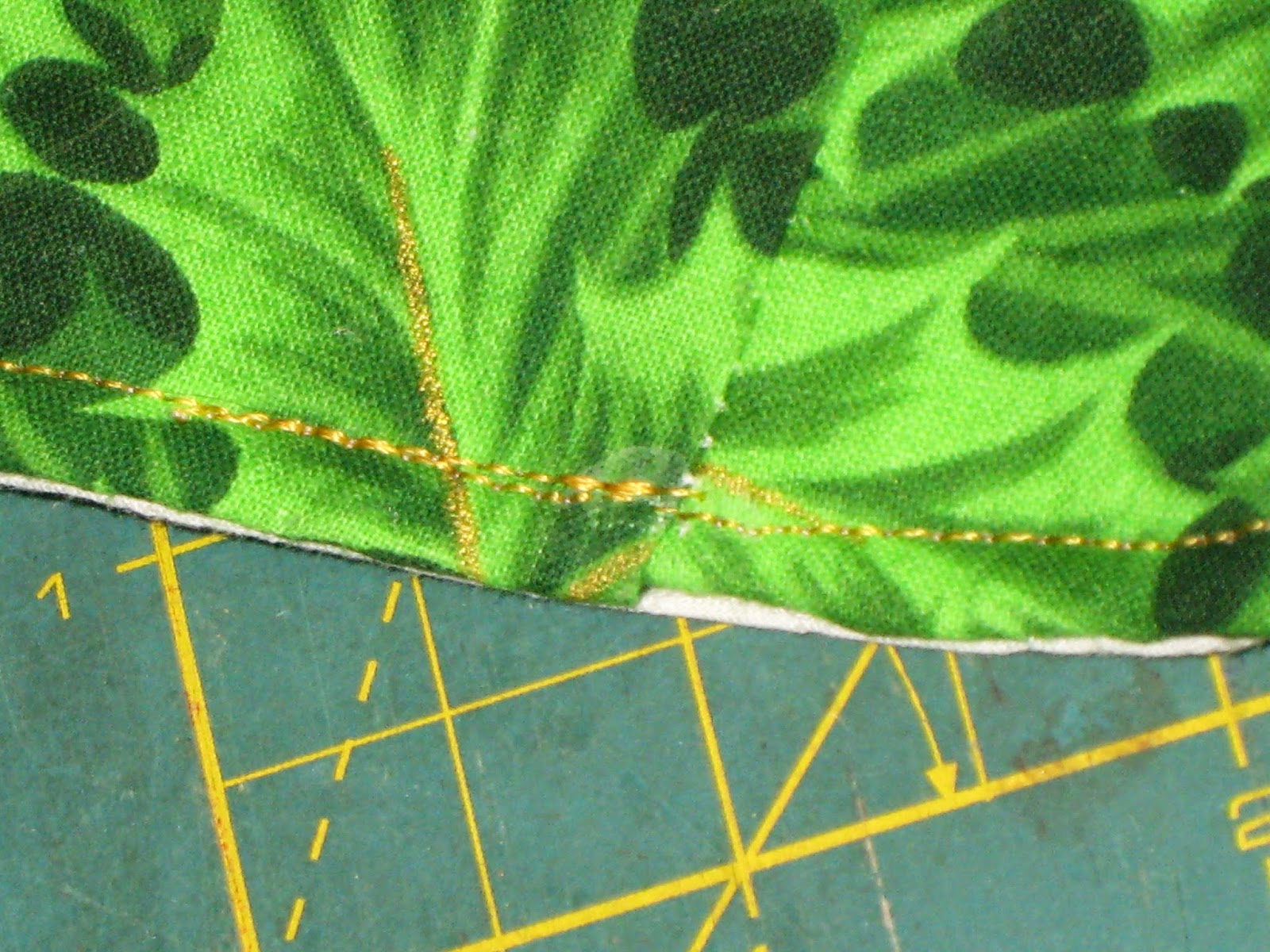 After sticking it down with some Fraycheck, I thought the best solution would be some gold stitching around the edge.  Because I used fusible fleece, it doesn't have to be quilted--which is good, since at this point I'd have probably stitched one of the cats into it--but the stitching will help hold it's shape. 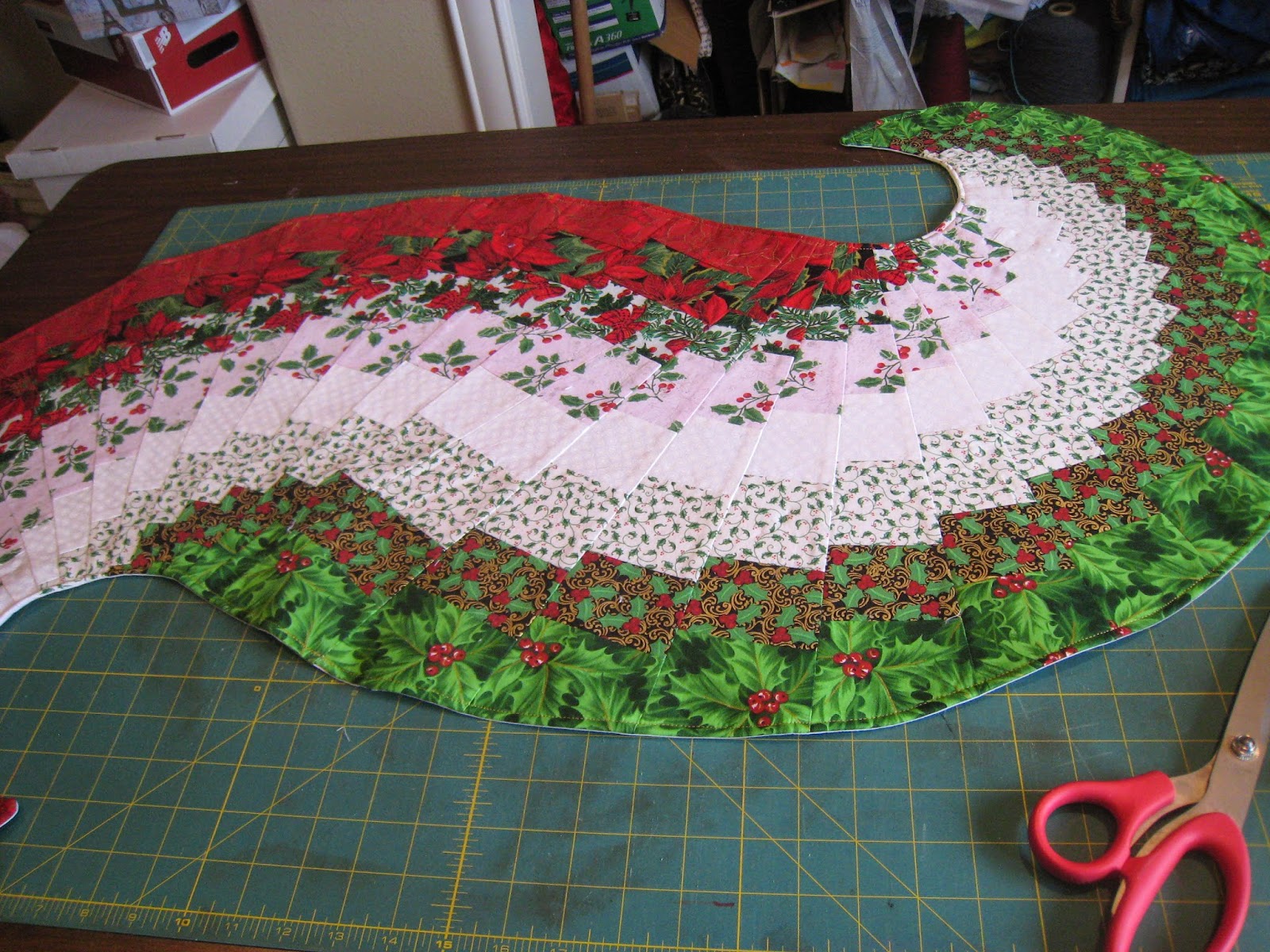 or the new slightly-curving-up-at-the-edges shape it has now adopted.  I'm going to wash it and hope for the best.  Lets just say that I've learned a great deal about what to do differently with the next two...

When one has been bullied by one hobby, it's always a good time to go spend time with a friendlier one: 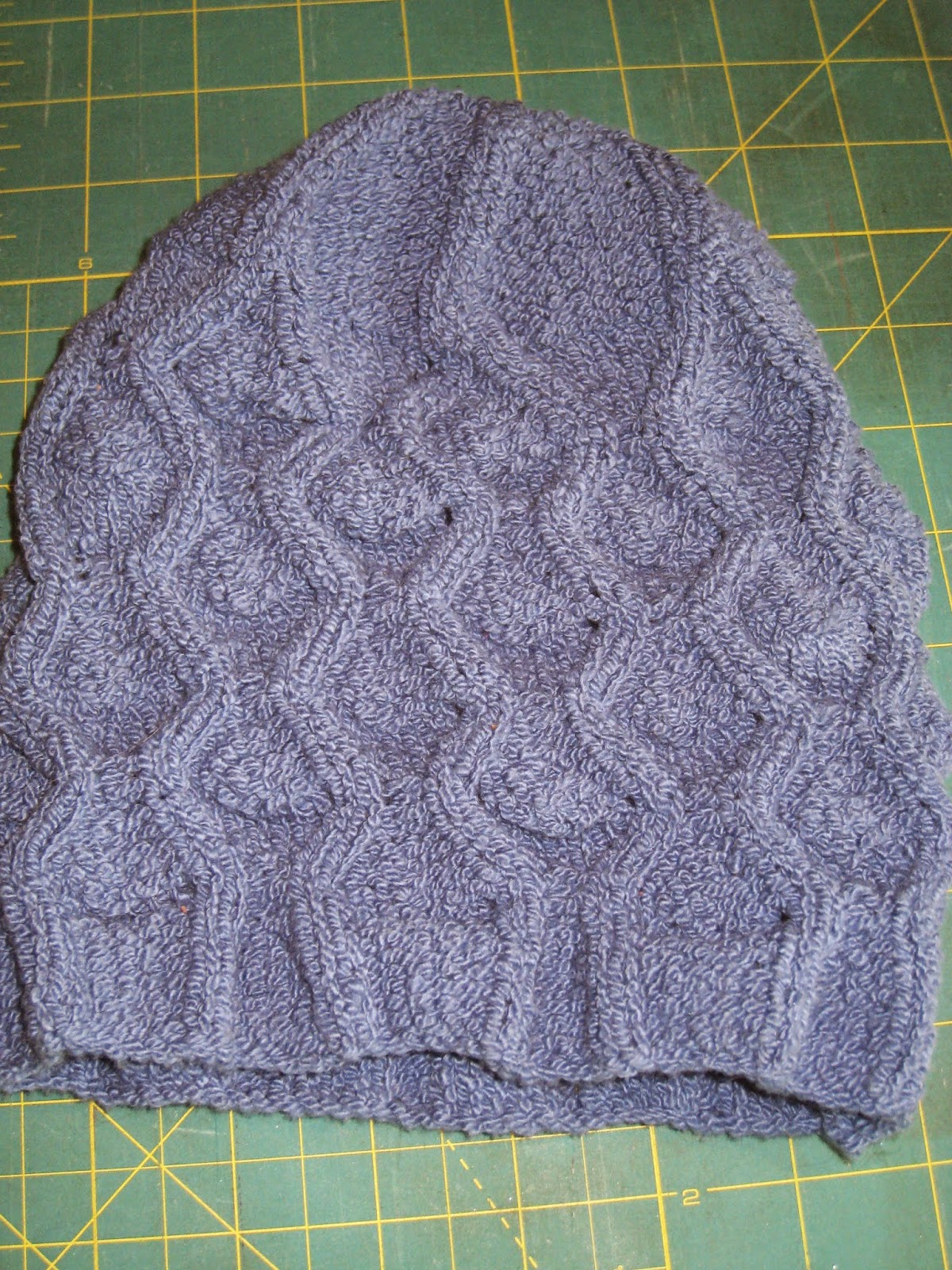 which uses up another 100 yards for my Mad Dash team.  Then I thought I'd start another hat using a peach acrylic yarn I'd set aside, when I discovered that it had faded a bit in the sun.   I could still use the yarn for something that didn't matter, 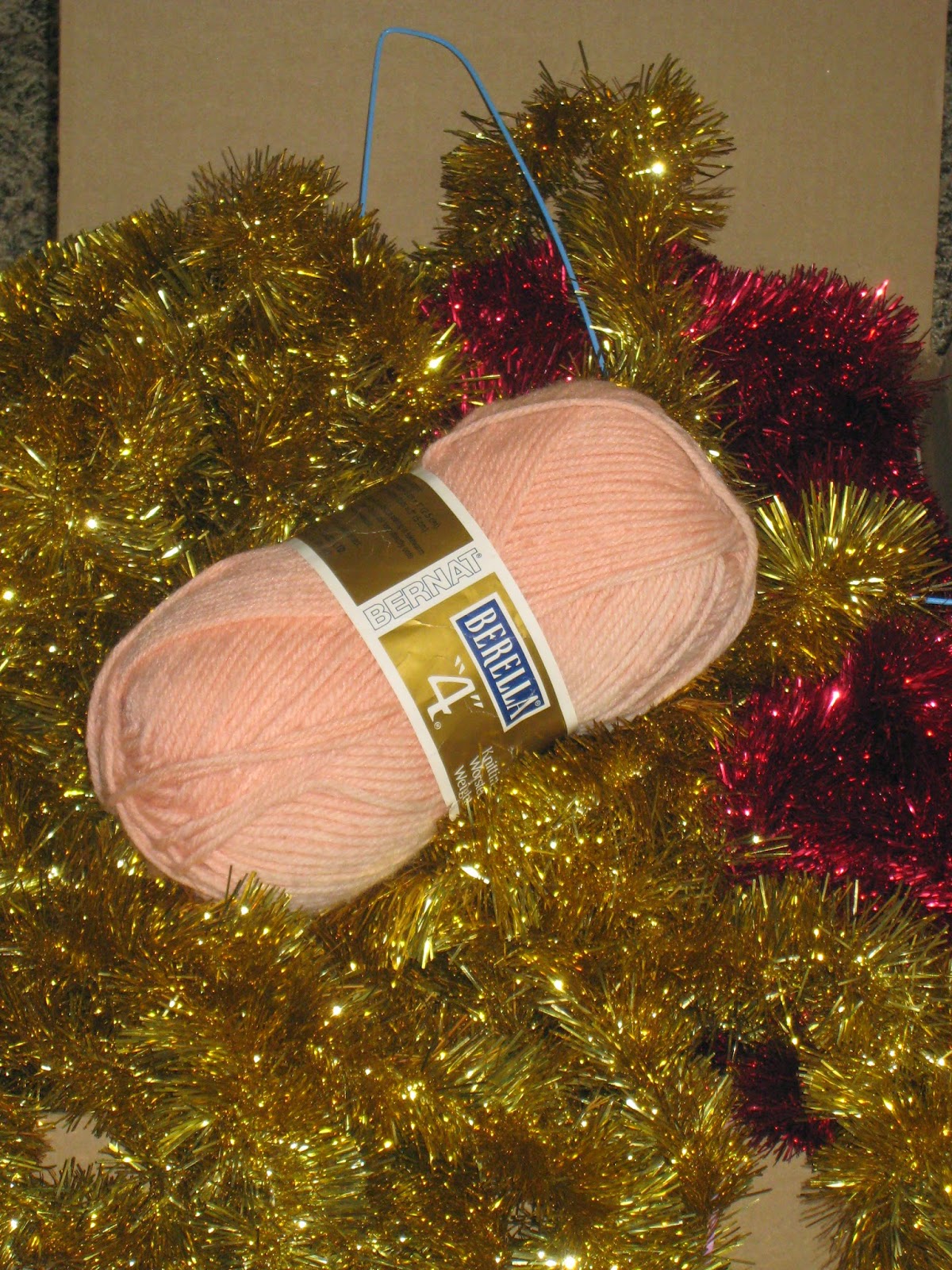 I've also got the 5 red and white runners sewn together, and two don't have any problems after adding seam allowances: 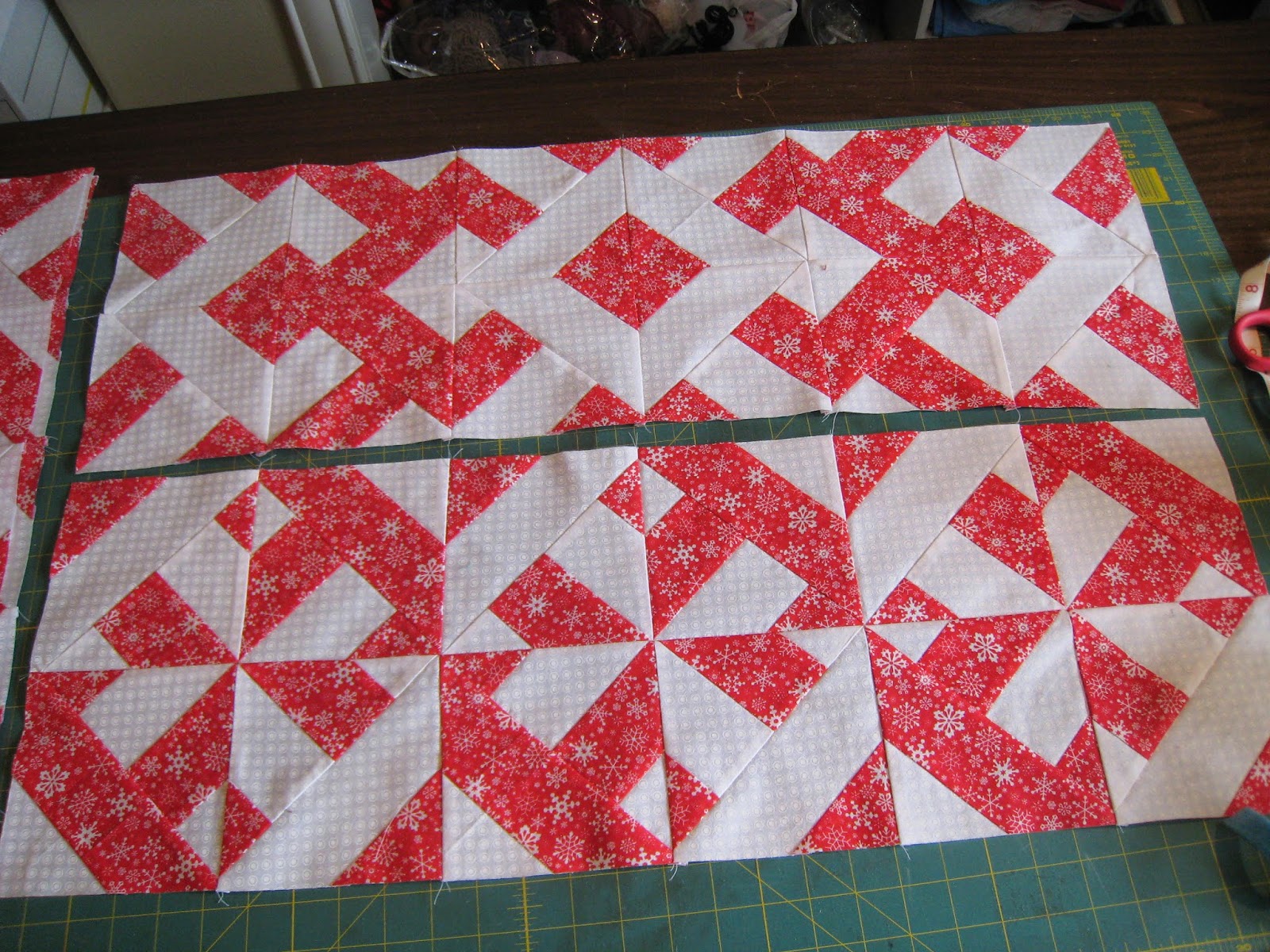 Which means that THREE didn't do quite as well: 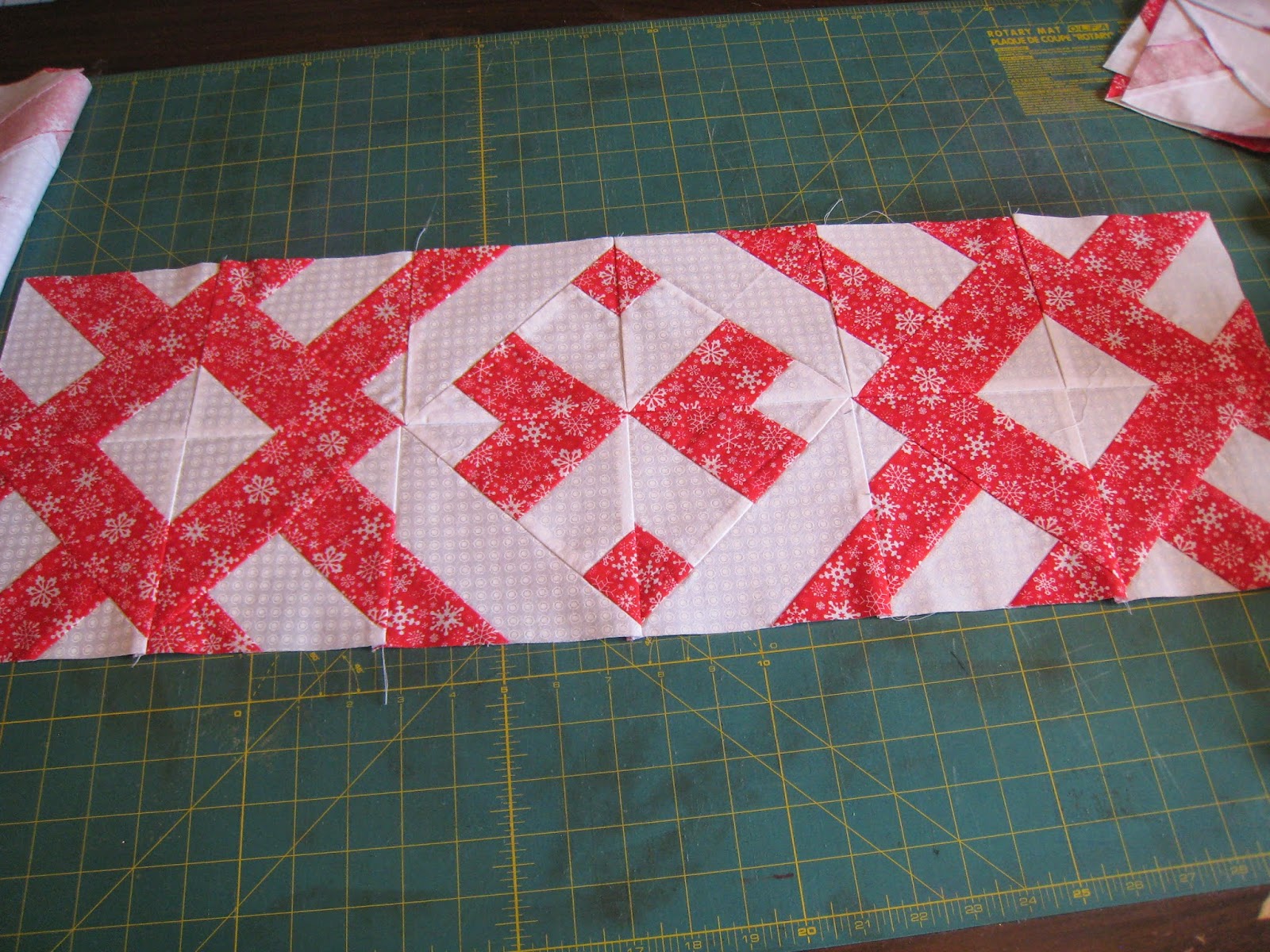 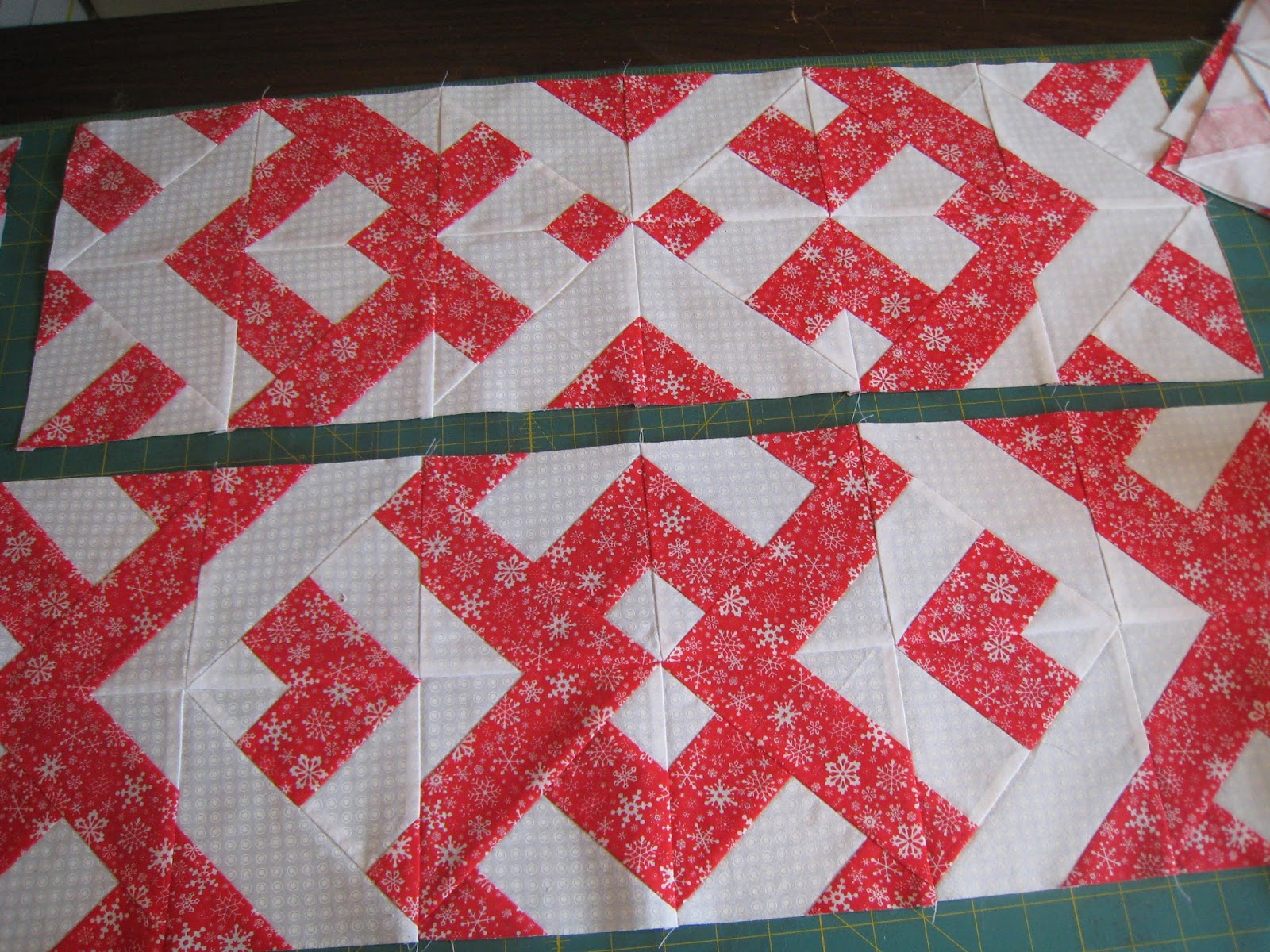 Oh well.  Almost everyone we know needs reading glasses now, so maybe no one will notice.......

When you've already made a pretty big mistake, it's a good time to experiment.  On Sewing with Nancy, Nancy said that one could use fleece to back quilted tablecloths, placemats, and table runners.  I'd bought some white fleece to try it, 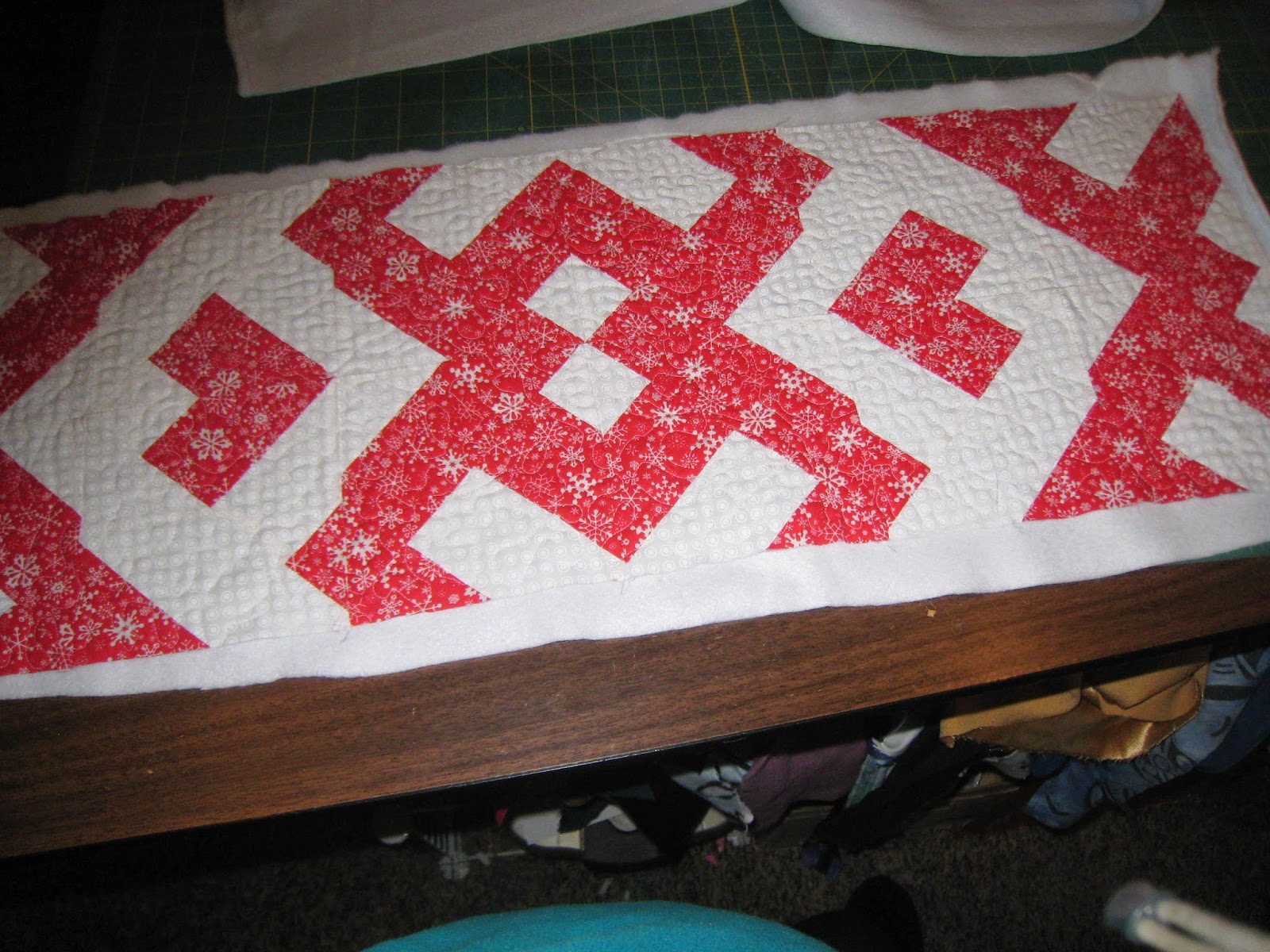 and tried it one one of the runners.  The great thing about fleece is that it doesn't need any quilting.  I decided to stipple it anyway, which was rather interesting.  Because of how the blocks were made, they are very stretchy.  On top of a stretchy batting is REALLY fun, but it works.  And it's ready for some binding tomorrow.  I'll try one with a fleece backing with no quilting, then do some with traditional batting and backing.  Then I'll really, really, REALLY be ready for something new!