There was a brief moment of horror last night when I cleaned out my purse and discovered that the notes on the vet receipt said the antibiotic needed to be given for 14 days.  The bottle says 10, and today is day number 7 and while Theo still has a little congestion, an 18-pound cat feeling better and who knows what is coming is spectacularly hard to medicate.  In terror, I called the vet first thing this morning to verify that we only had to endure this torture for 10 days, not 14.  Luckily, it is 10 days--I think I would still be sobbing if it were 14.

Theo is feeling better, and was even chipper enough to hang out with me 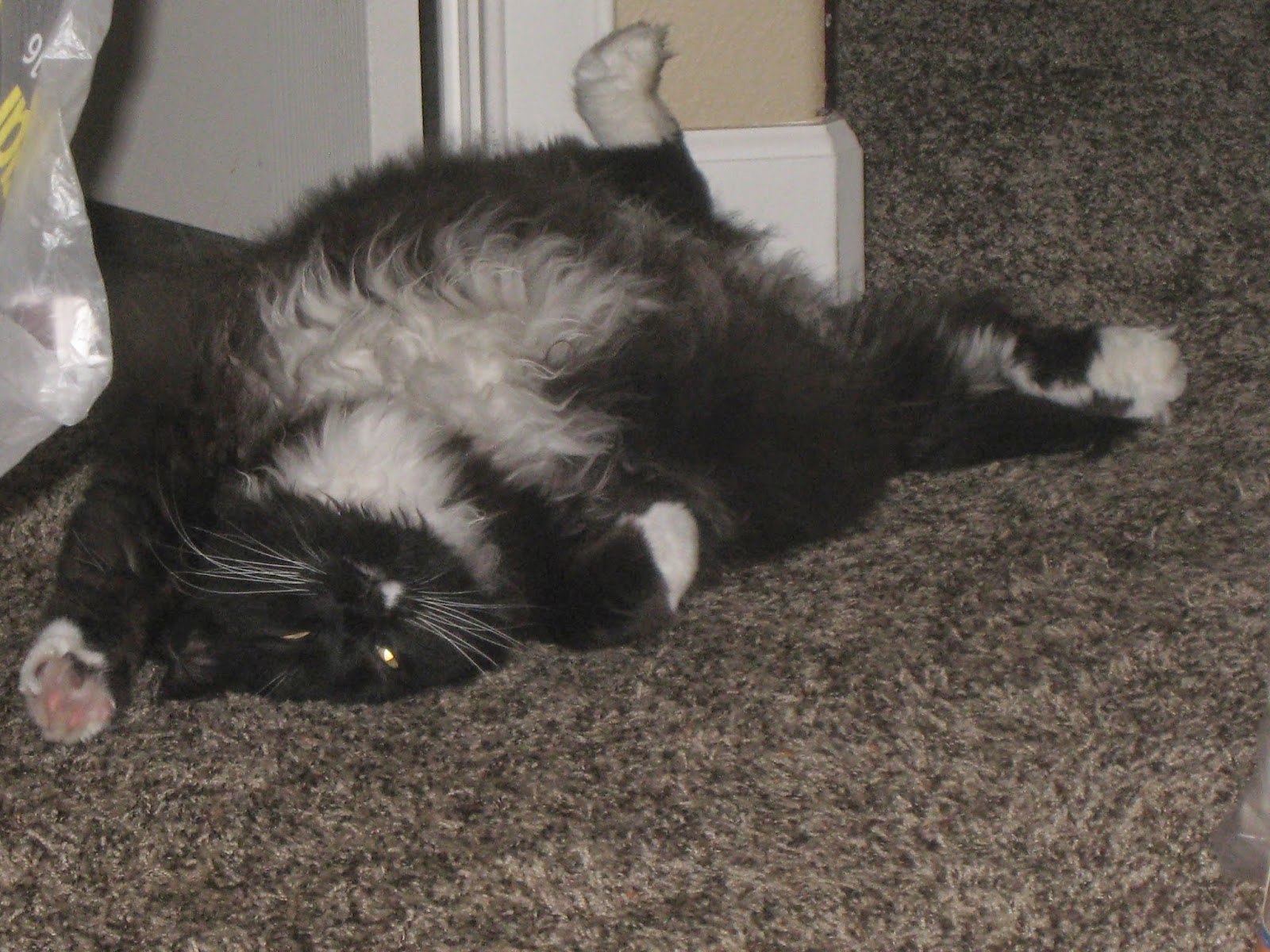 until he discovered that I wasn't going to stop giving him the goo, so now he is staying as far away from me as he can: 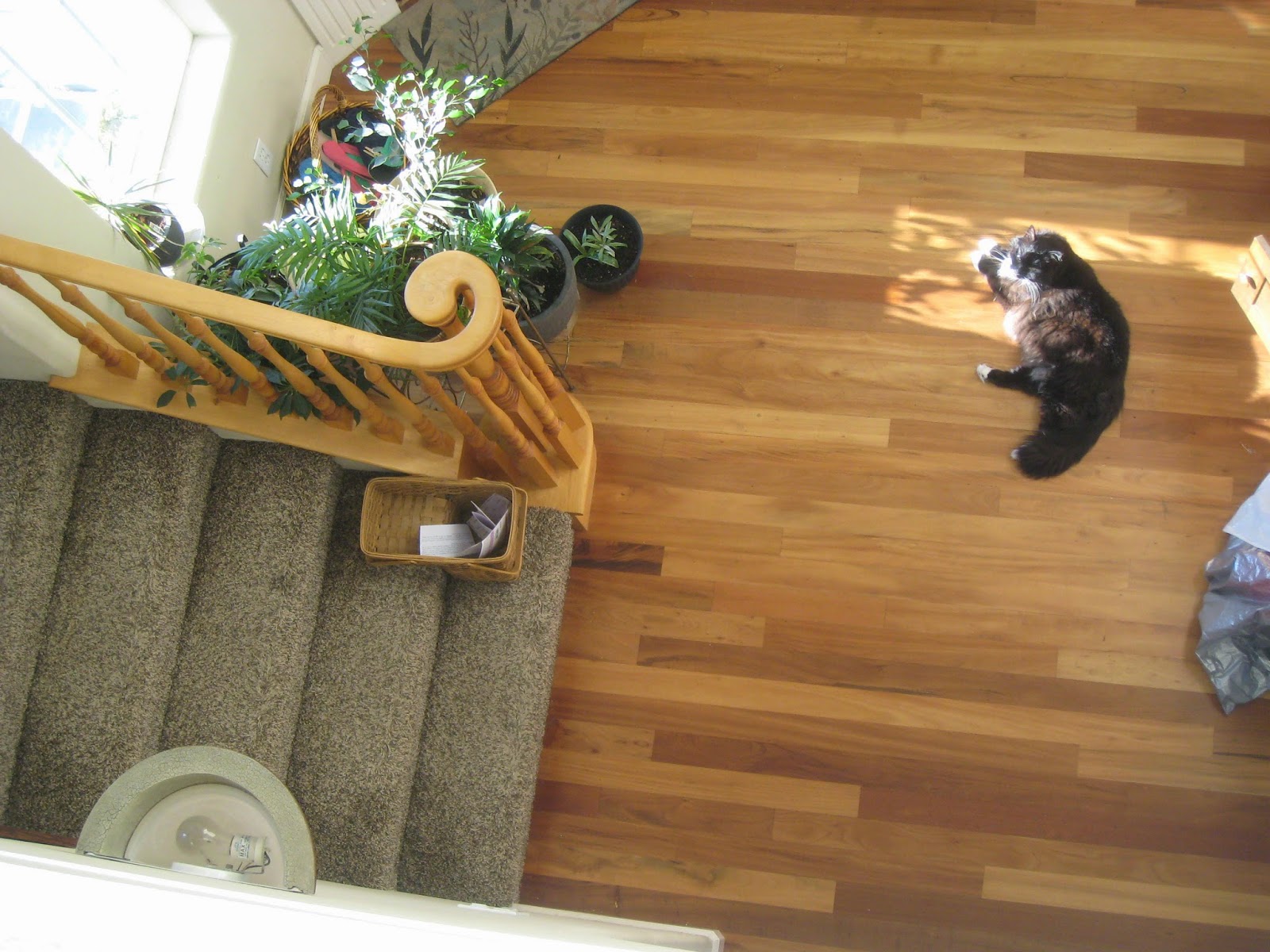 and even though I know this is for his own good, the guilt is overwhelming.  I can't say that I blame him--I wouldn't be thrilled with me either--but since he caught cat flu because I boarded him, I am actually responsible for the last couple weeks of misery for him, so I was feeling guilty enough already.

With all the stress, lack of sleep, and the recent flying, Andy and I both seem to be coming down with colds ourselves, which would usually earn me a get-well kitty, but Theo says I am on my own this time, so I took Nyquil yesterday so I could sleep during the day, and I think that helped.  I have also done something to irritate my carpal tunnel issues, so I can't really knit, so when conscious, I worked on 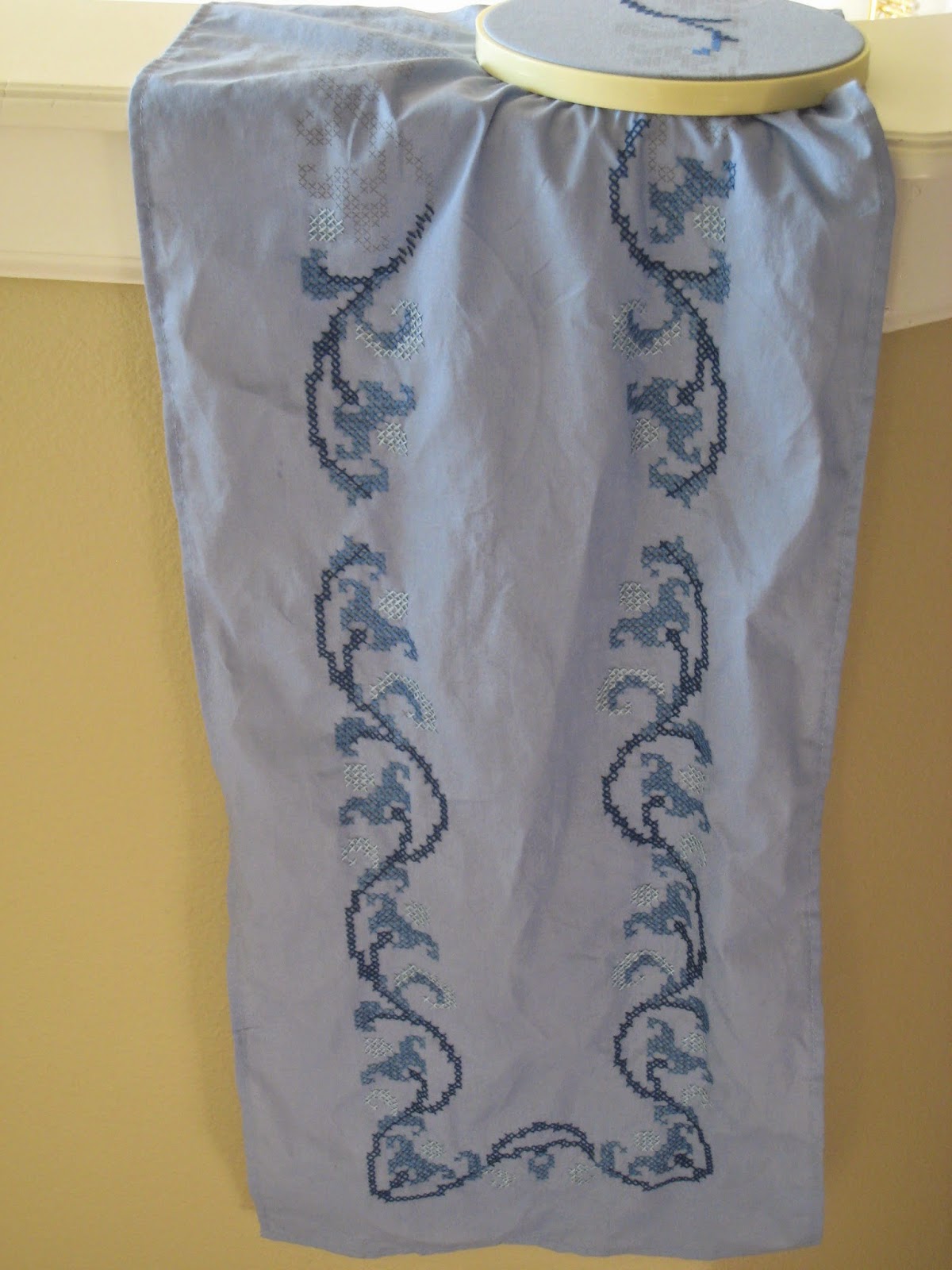 I don't even think this has made the blog, but it's a simple stamped cross-stitch table runner that I started a couple months ago.  It requires no outline stitching or anything except nice little "x" stitches, and 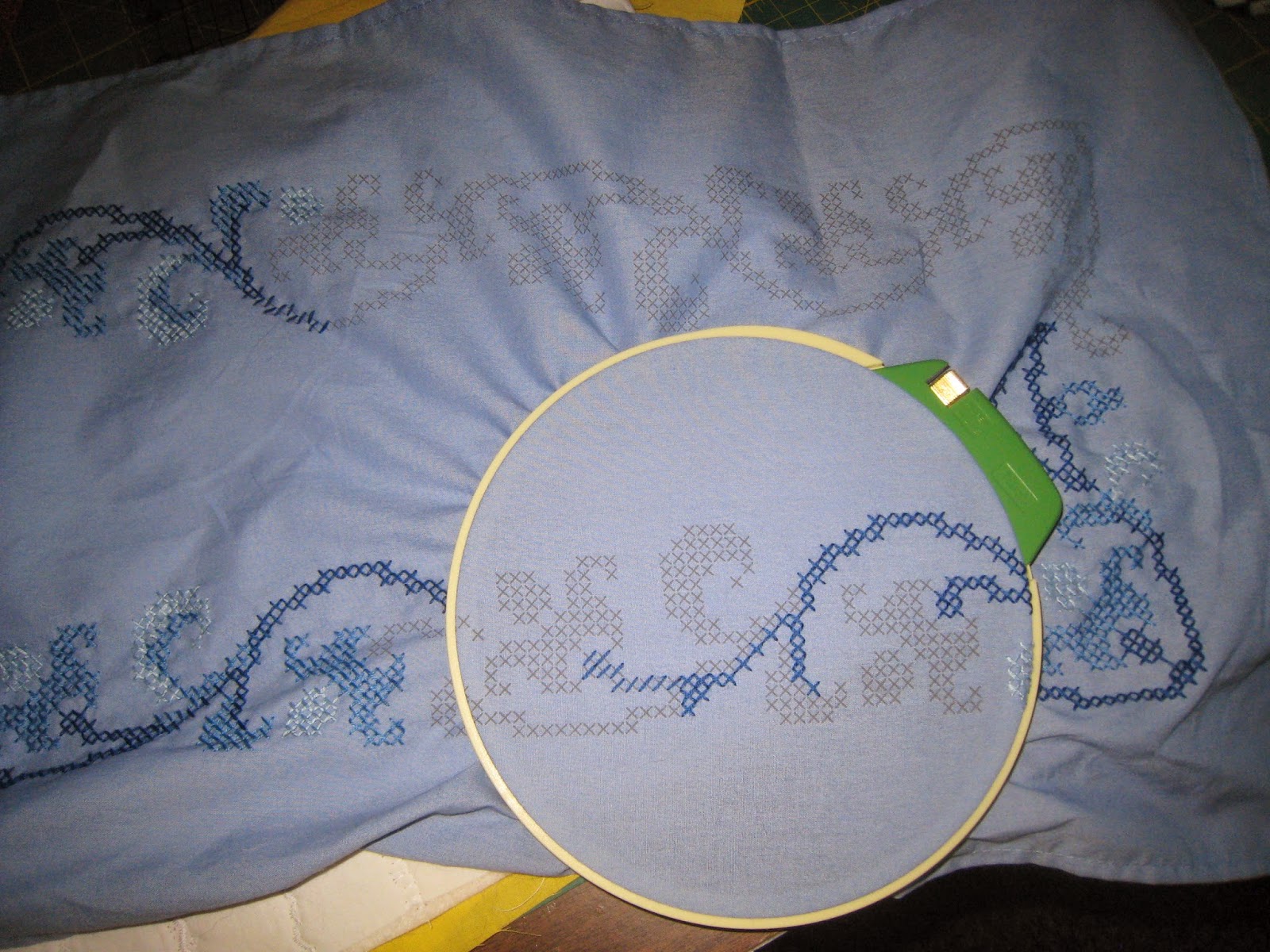 is now almost finished.  Stamped cross stitch doesn't look as nice as embroidery, but as I'm pretty much a novice at needlework, I think it's a nice way to start.  And that pillowcase stash isn't looking quite so silly now...........

Speaking of stash issues, the new ornament kit has arrived, 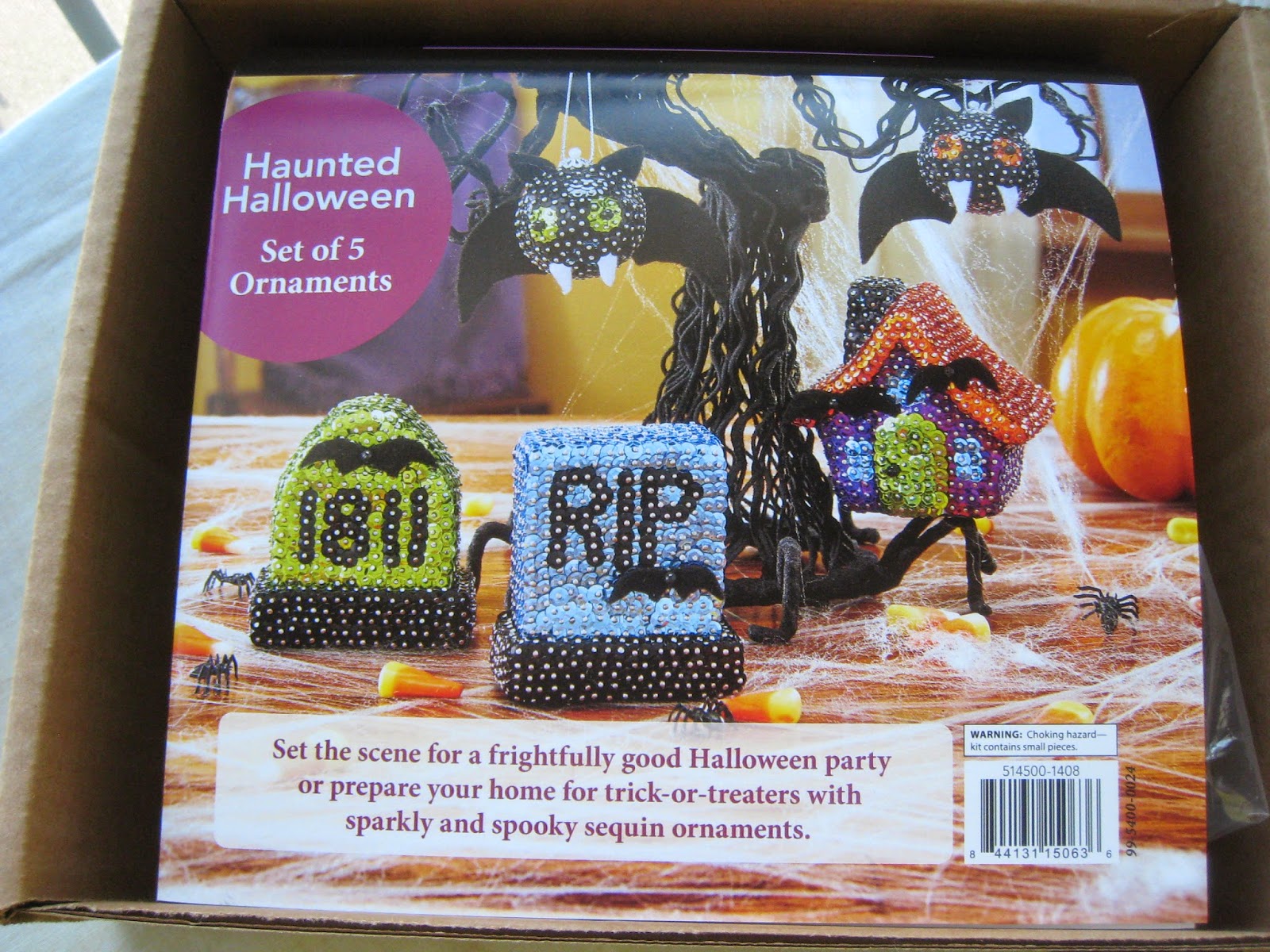 and I have still only finished one ornament.  I am definitely canceling when I've hit the one year mark, but I just find these so delightful that I can't bring myself to do it sooner.  Don't you just love the bats?  I can return any kits I don't like, but I haven't received any that I don't want to make, so I've got a NEW stash now.  I think I might need to do the Project of the Month program for myself again next year.  I do like the surprise every month, and I definitely have enough projects.  I'll be able to surprise myself without anything new arriving in the sewing room.

The nice thing is, even slow projects do generally get finished around here.  I got this Sunday, 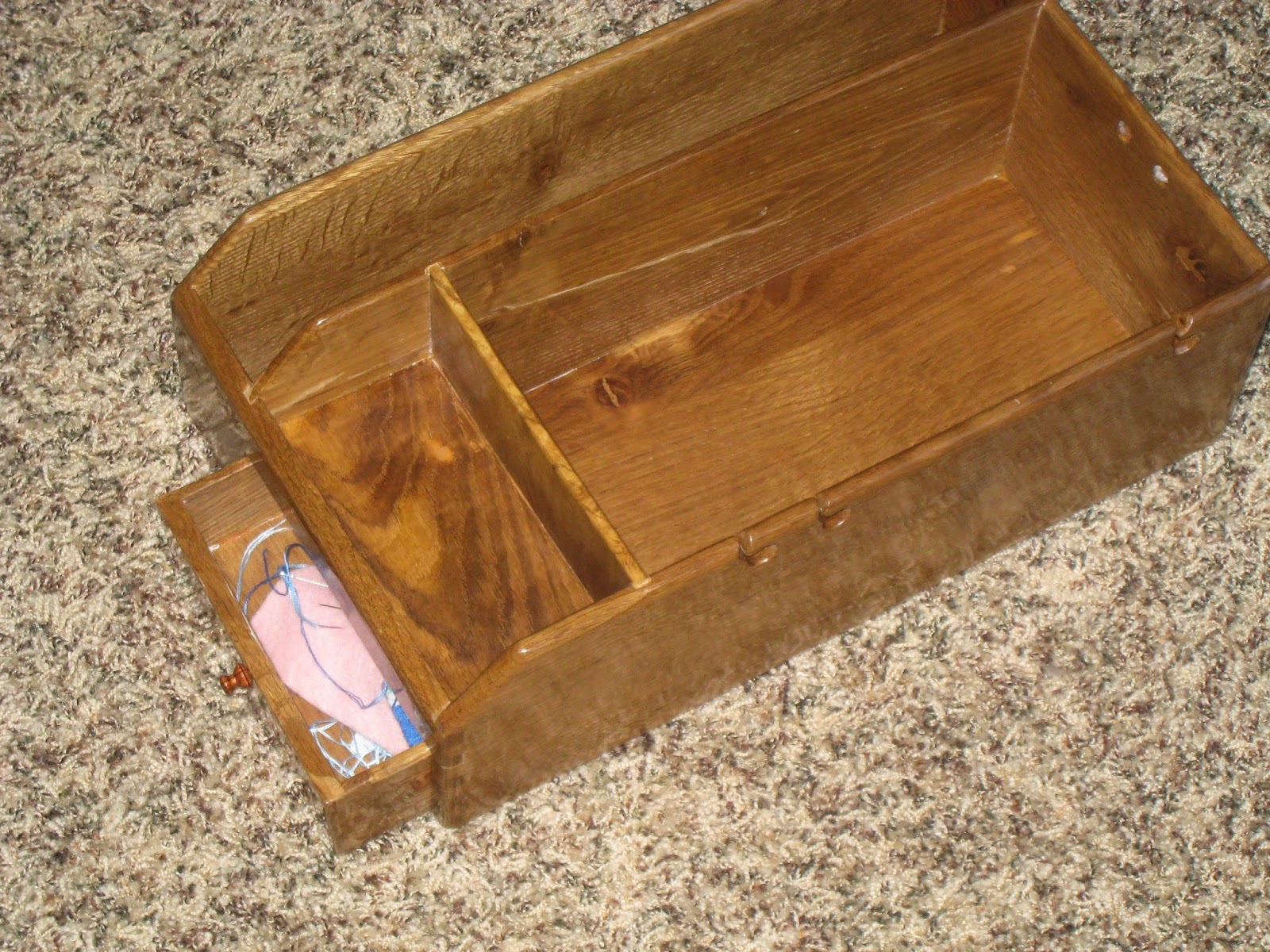 which is a knitting box AND my Valentine's Day present for this year from Andy.  I actually hadn't heard of such a thing, but apparently a lot of woodworkers have wives who knit, so LumberJocks.com had some ideas, including 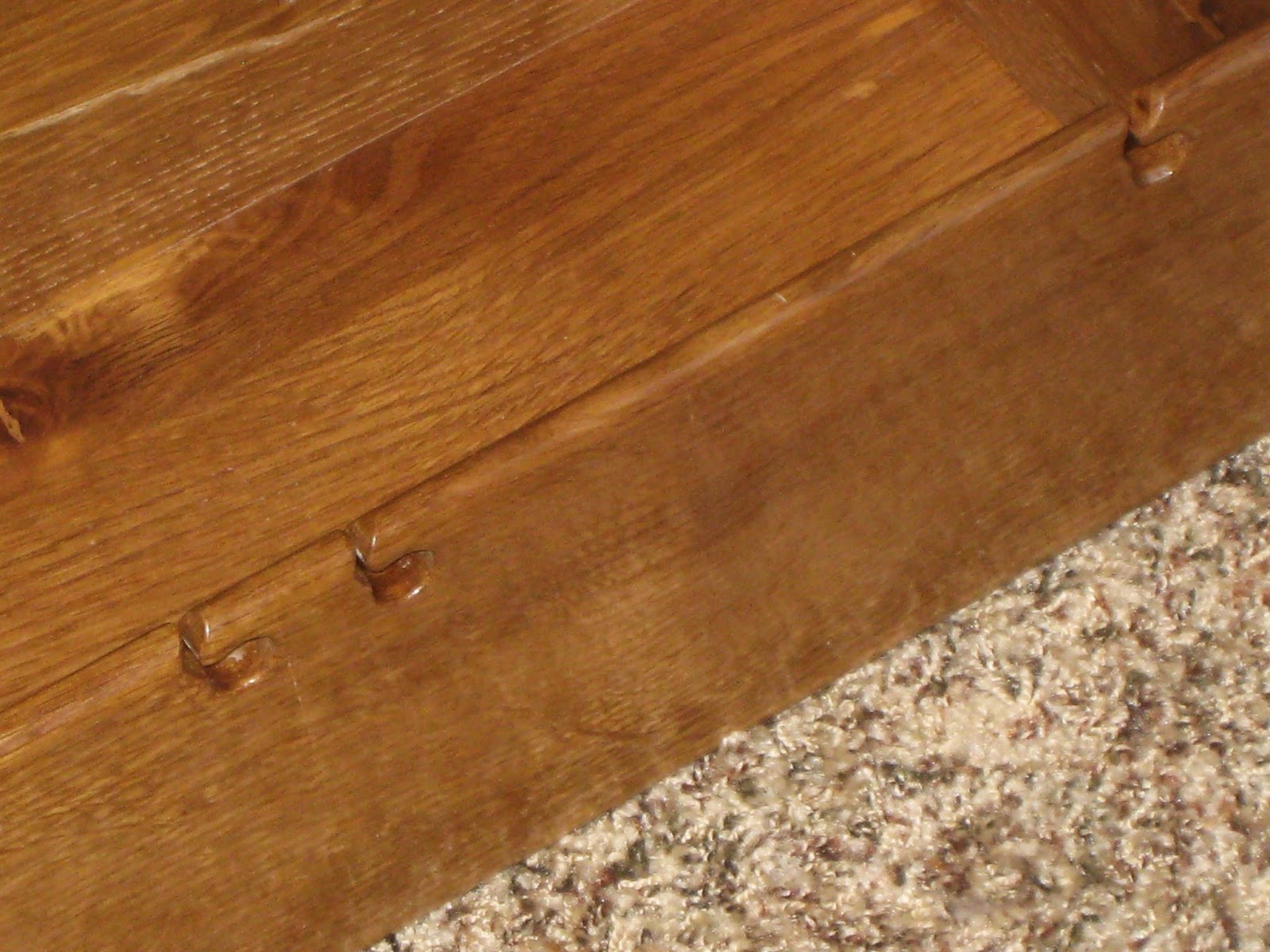 adding holes for yarn to travel through.  Isn't that clever?

And lastly, a couple finished projects by ME.  After my spending ban ended last year and before the one I have so completely failed THIS year started, one of the dozens of machine embroidery websites that email me had a really inexpensive lace ornament set, 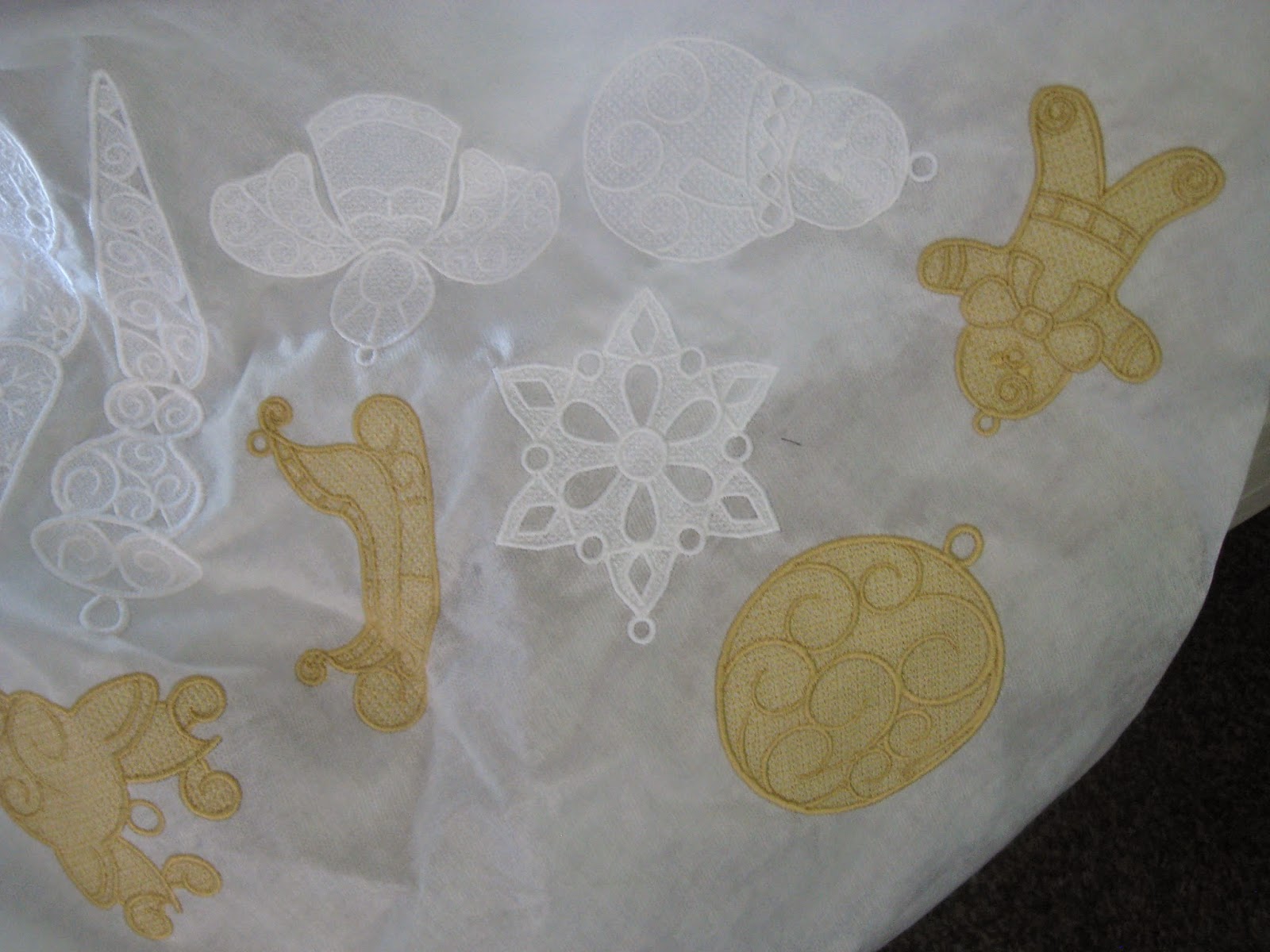 which I, of course, purchased but hadn't yet tried out. Some of them are hard to see, but there's a snowman, angel, reindeer, sleigh, ornament, gingerbread man, and an ornament.  I still have the wreath, tree, and something that may or may not be a snowflake left to do.  I still have one ornament set left untried--it involves a backing and several new steps for embroidery for me, so I'm building up my courage for that one.  These 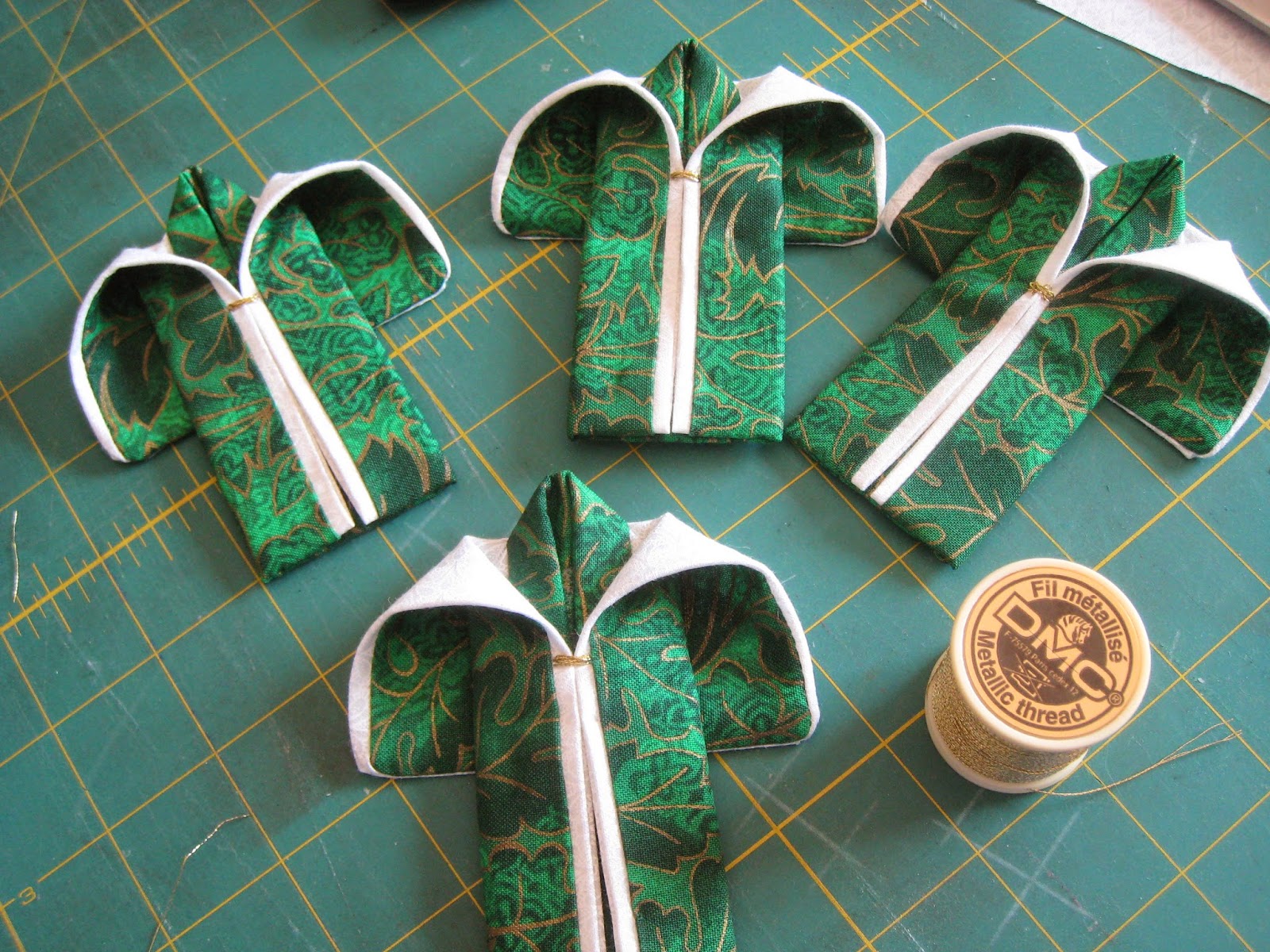 were probably a good step.  While I have probably given out some unclear directions in my time, I didn't charge money for them, and after seven ornaments, 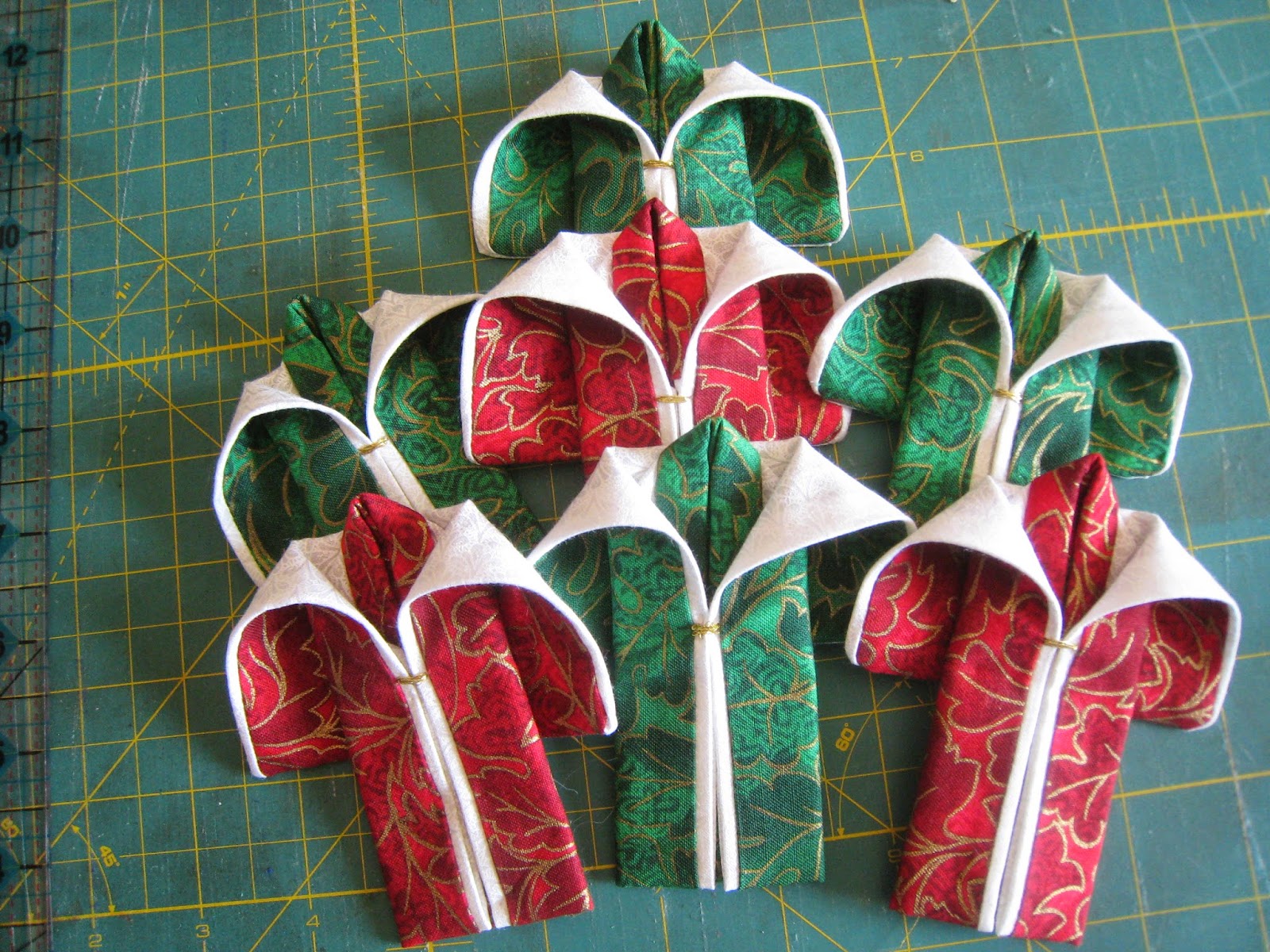 and the introduction to DMC metallic hand-embroidery thread (of which I'm still not ready to talk about), I fail to see how any machine-embroidery project can be more challenging or difficult.  Maybe that will be my Labor-Day weekend project..........