Last weekend I really was over the bronchitis, but I made the mistake of stopping the nights of Nyquil as well.  After 3 weeks of the stuff, I seem to have been a little addicted to sleep aids, so for two nights in a row, I couldn't sleep.  Monday morning the darn but was back and I'm not over it yet.  Dang it.

I am feeling slightly better today, so I thought I'd play a little catch-up.  In little bursts of feeling good this week I've been working on some shaping ideas for bowls.  I wanted to see how far one could curve the sides inward, 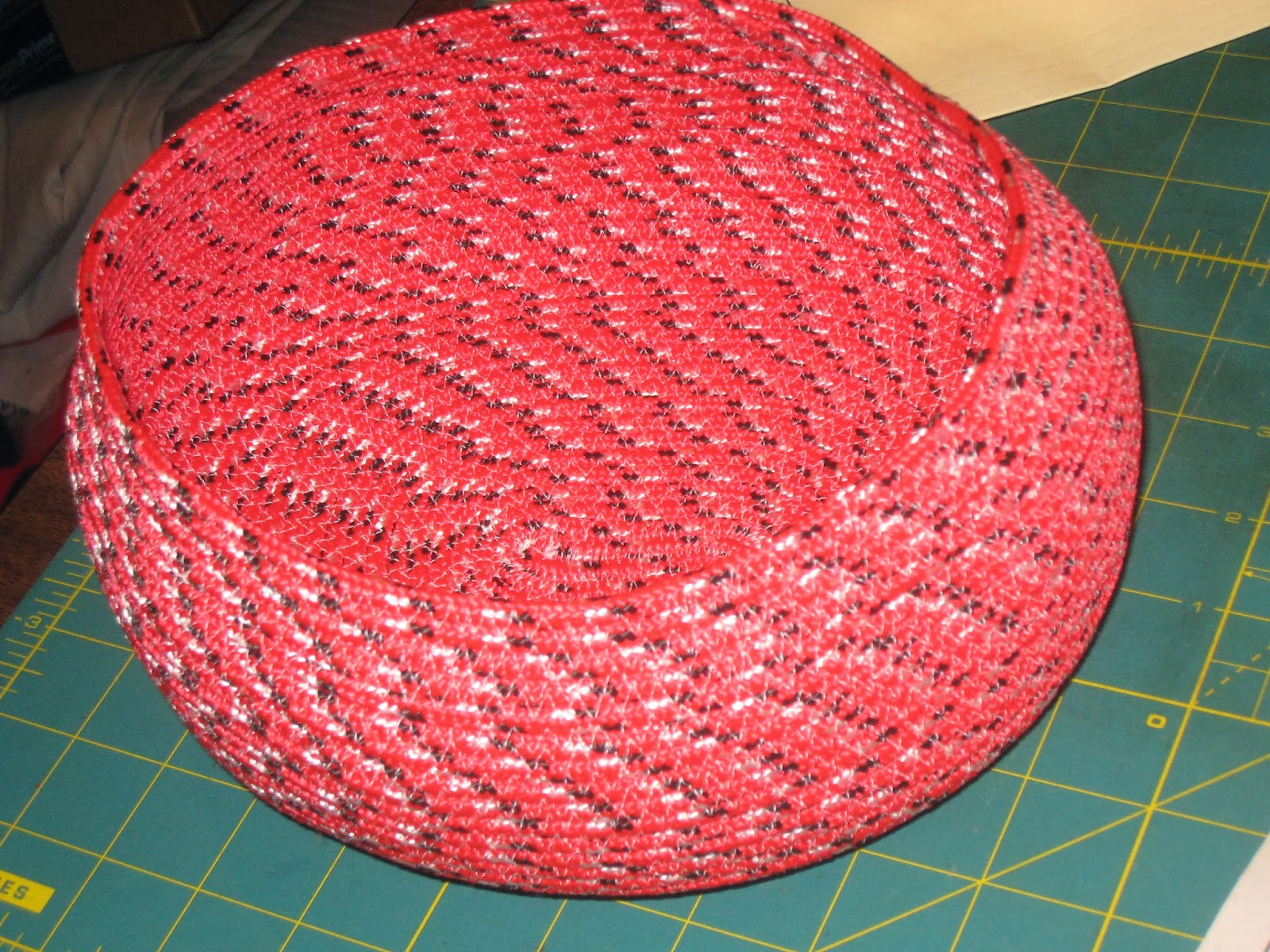 which isn't that far unless the bowl is large, and there's a point where it goes from "possible" to "impossible" all at once.  Next I thought I'd try to curve the bowl down instead of up, which only goes to show you how far the month of cold medicine has addled my brain.  You cannot slant a bowl downward because there's a bottom of a sewing machine in the way.  So, 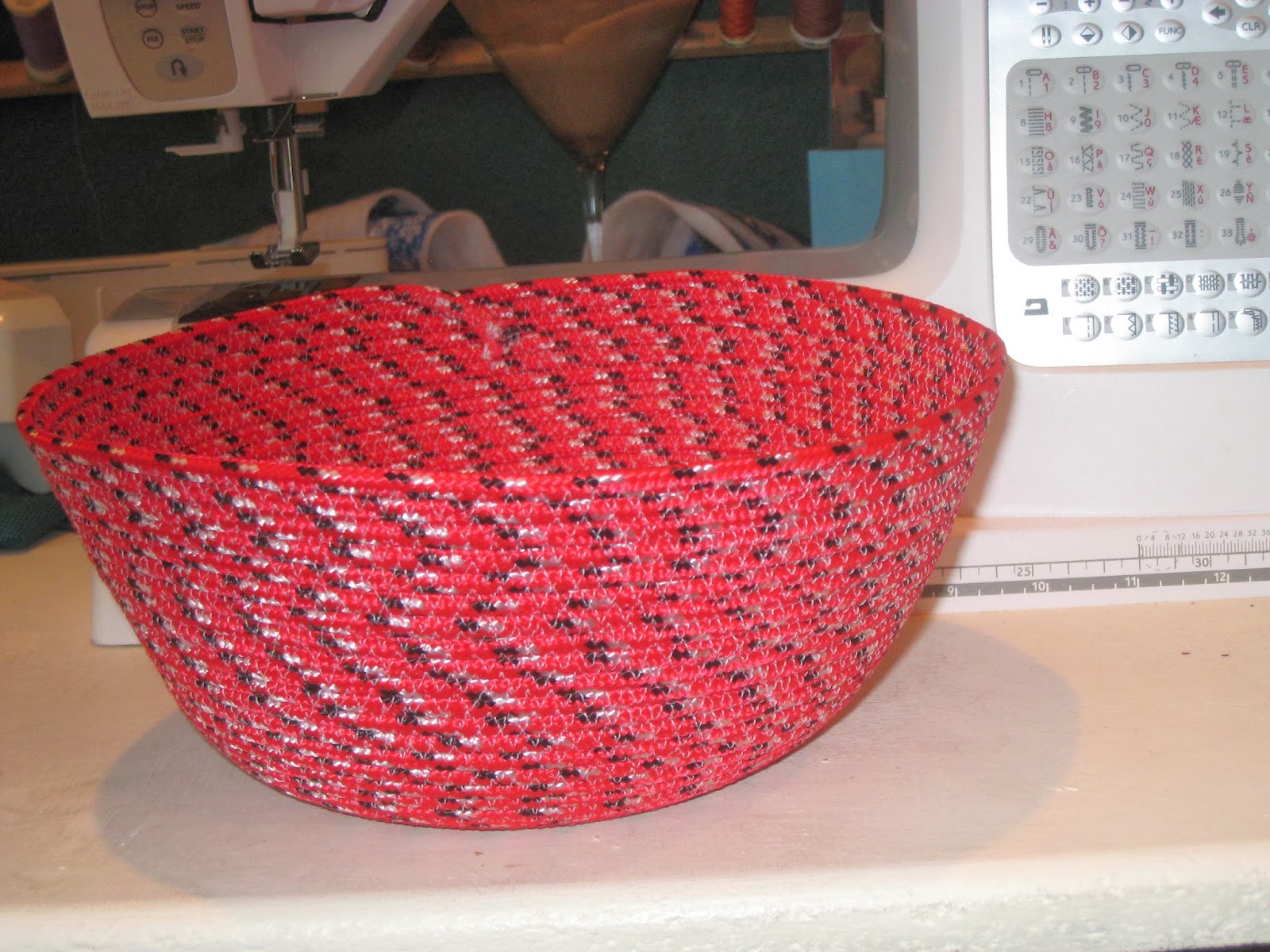 I practiced my slanted-sides technique instead.  I'm hoping my bowl technique will be a bit better when I'm off the drugs, but I think this one can be mashed into shape.

I haven't been blogging--or thinking clearly--but I have been knitting.  I am now more than half finished with the lace edging for the lace capelet, 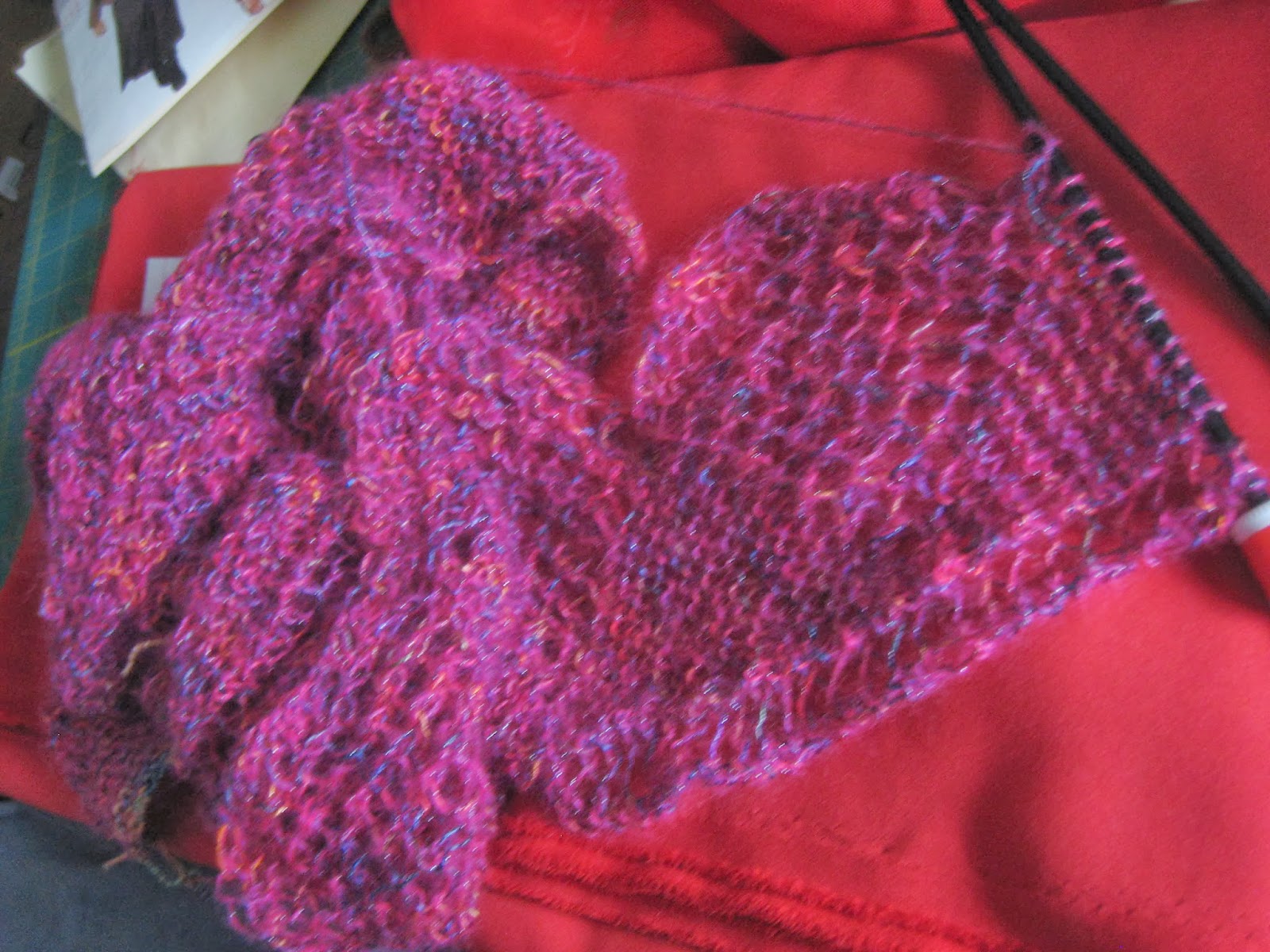 though as there are 28 sets for this edging and I still have 14 to go and then must still attach it, I'm not ready to consider it close to finished.  Closer though.  I have also done one and a half of my 12 threads on the never-ending cross stitch, 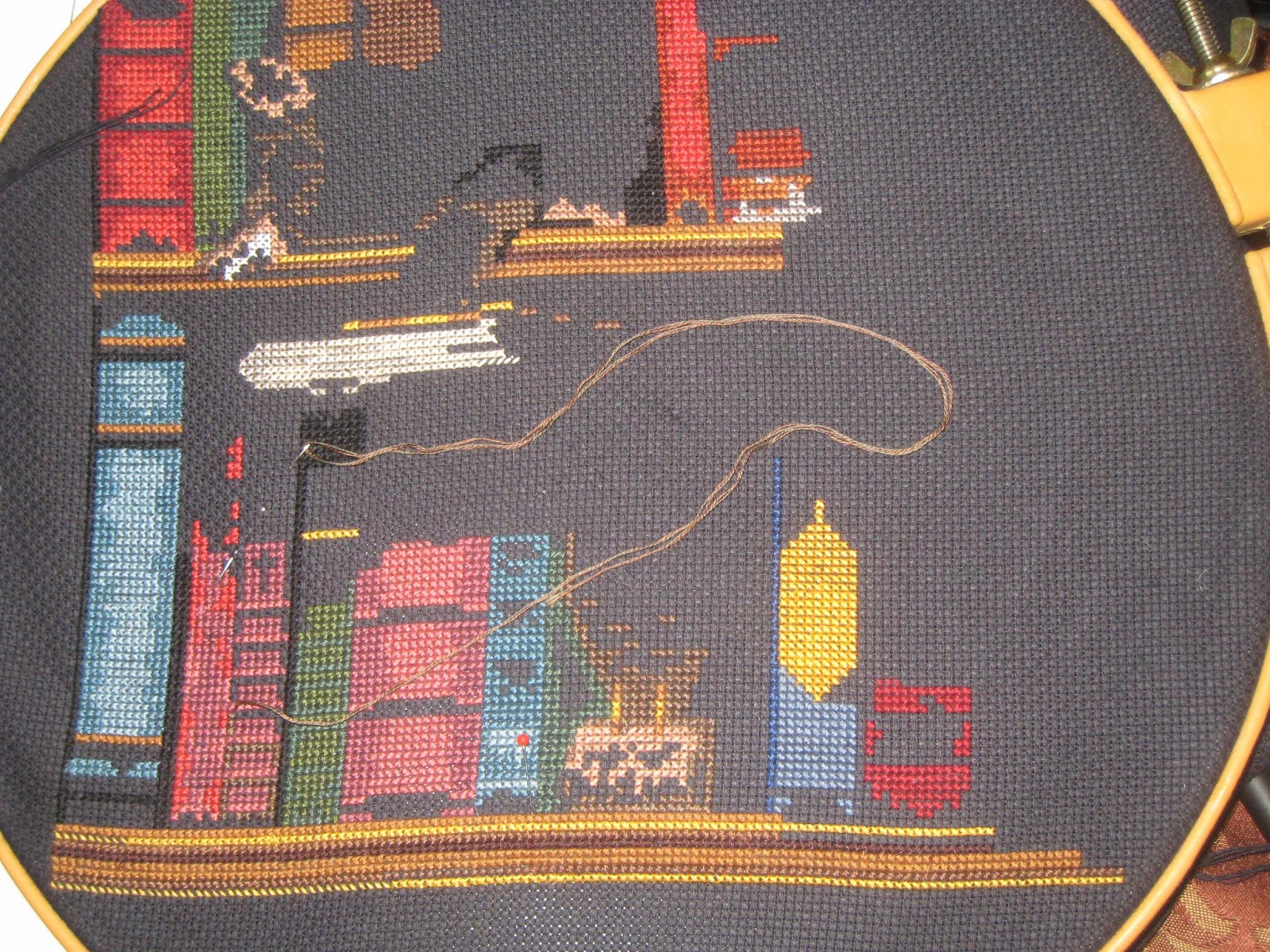 and even more surprisingly, 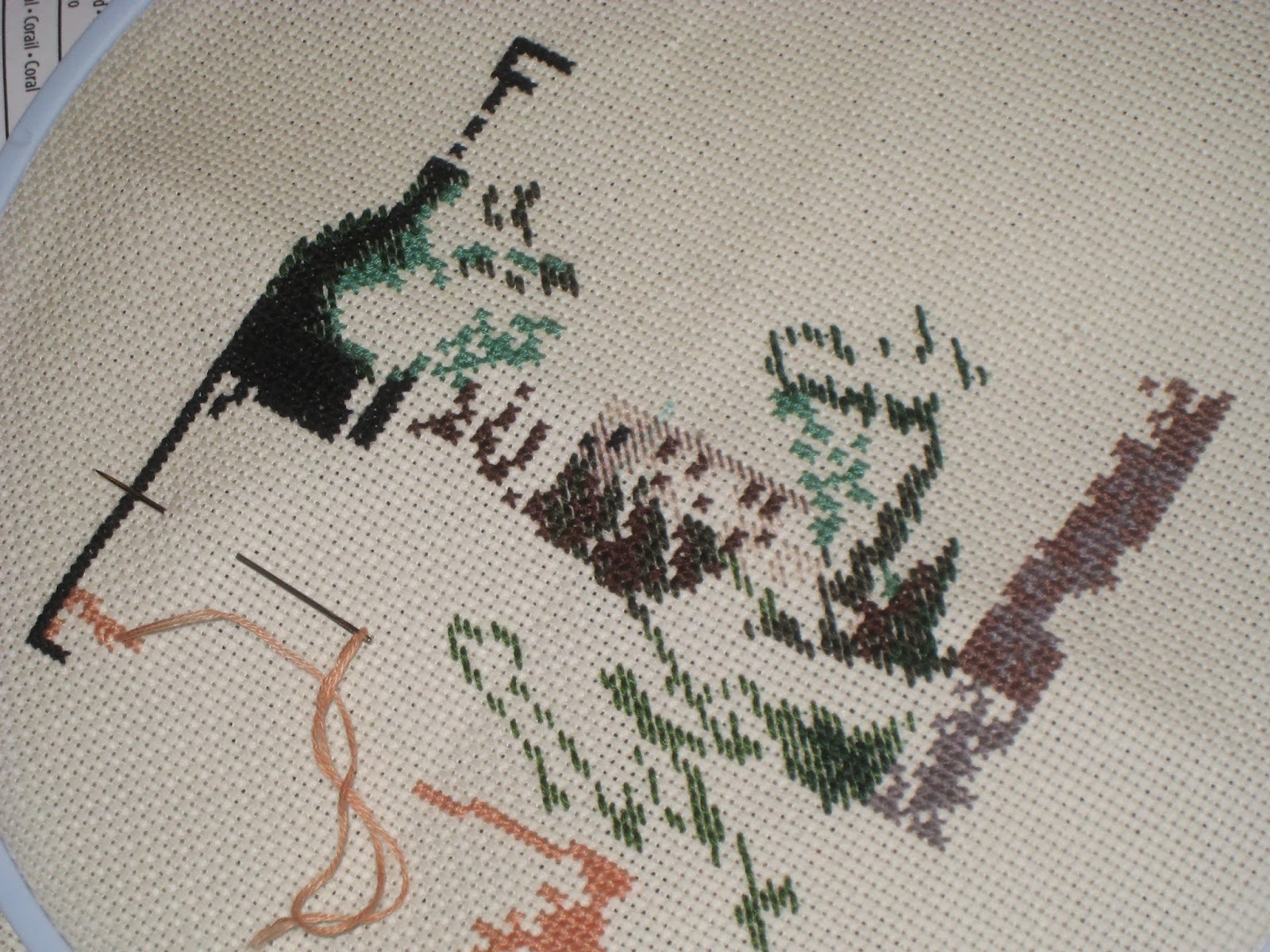 am making great progress on a second, smaller one that I bought two or three years ago.  At times I have wondered if I'll even like the never-ending cross stitch when it is finished, because it's a wee bit "cutesy" for me and the room I thought it would look nice in belonged in my old house, so at some point buying a smaller Tuscan wine scene cross stitch seemed like a good idea.  And it must be, because I started this sometime in 2013 and it's making great progress.  The nice thing is that sometimes the black background is easier to see and sometimes the white.  And smaller is fabulous.

I've also been working on the heel of the latest socks, 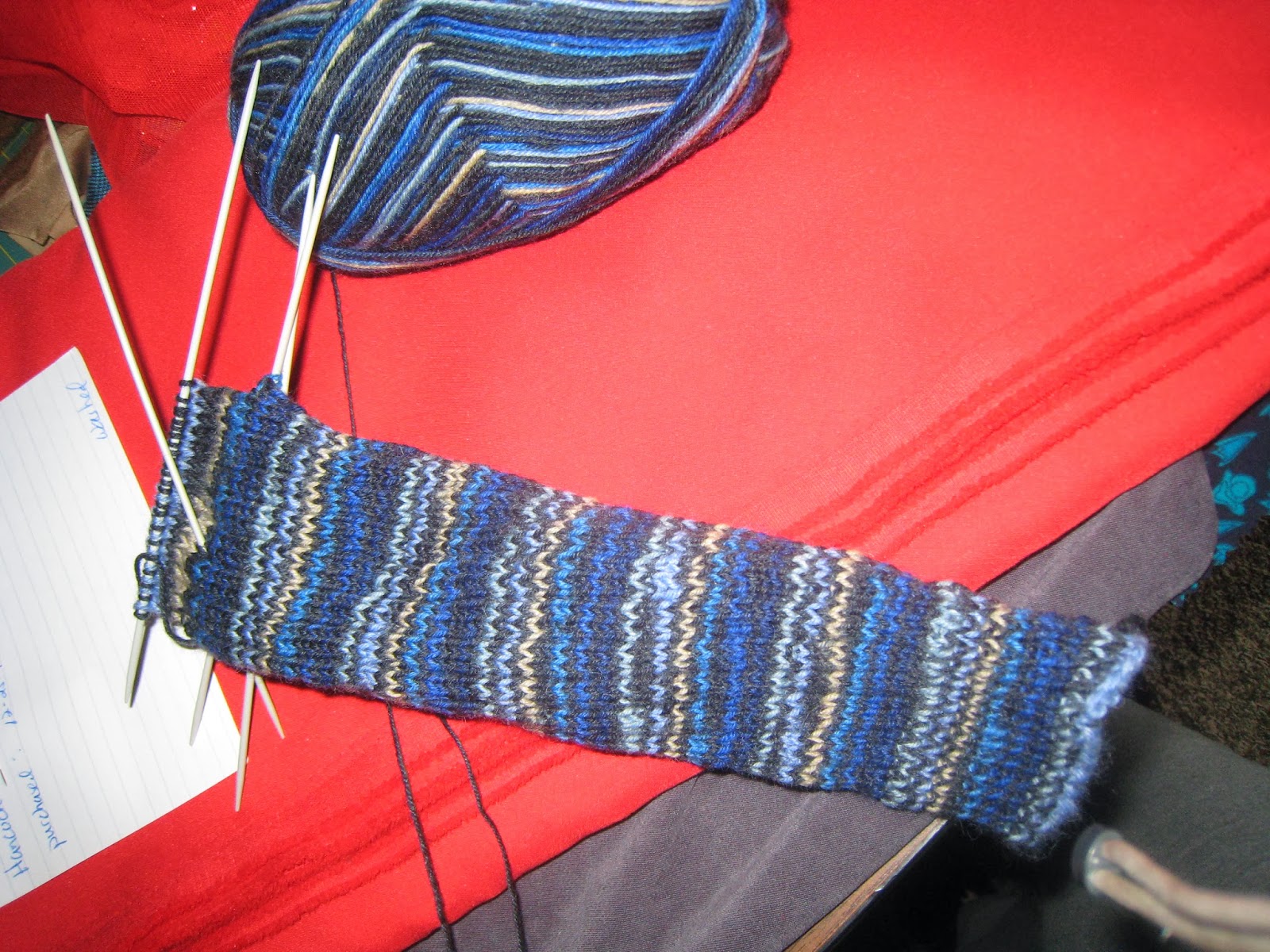 which I was making to learn a new toe and heel technique, but now I've decided that I wanted a reinforced heel so I'm combining techniques.  I swear there was a time when I really could follow directions without changing them.  I don't remember when, exactly, but I know there was one.  Maybe it was back in that distant time when I didn't have a yarn stash and only had one knitting project at a time......