And because this is what we do when Andy is gone, Theo is having trouble peeing again.  I've been a bit more lax on his supplements as we ran out and I ended up having to order some, and I'd relaxed on the de-stress capsules a bit because he seemed so much happier when I didn't give them to him.  But, now we know better, and if he's still having trouble in the morning, I'll drop him off at the vet on the way to my appointment with the physiatrist (do I know how to vacation or what?), and we'll get a pain shot for him and he can sleep the next 3 days.

Meanwhile, Calisto enjoyed some time in the sewing room this morning watching the snow. 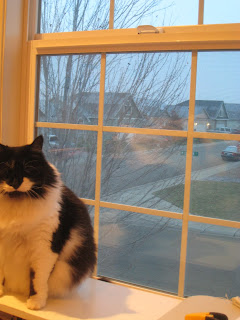 which is really hard to photograph, but here you can see it collecting on roofs  across the street. 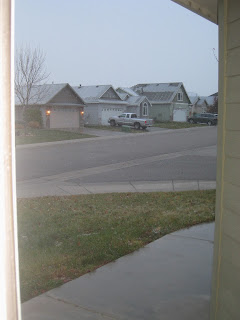 Of course, it's pretty well melted off by now--without killing the zinnias or tomatoes, by the way--but it does set the right tone for making ornaments.  I finally finished off the acrylic colorwork ornament, 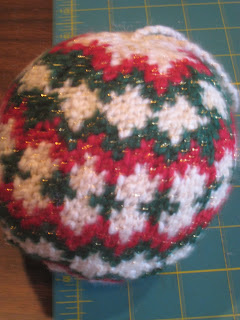 which I love.  Usually I don't really like acrylic for colorwork, but I have no sparkly wool, so I can make an exception. 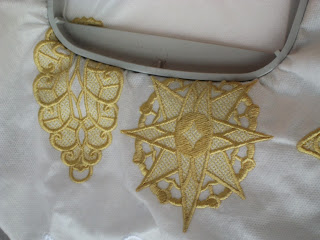 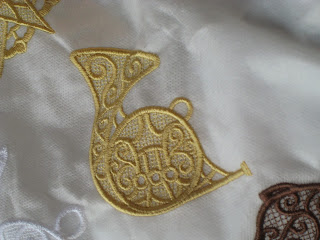 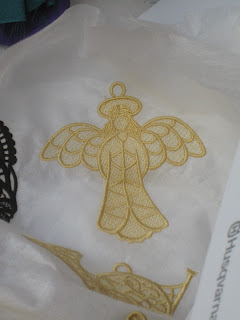 I'm still obsessed with the new ornament designs.  I haven't even made all of them yet, so three days later, it's still a "new" thing to play with.  Really, this could keep me occupied all week.

Even more exciting, my new toy has allowed me to catch up and get ahead on my ornament schedule.  Right now, I have exactly 50 ornaments left to meet my goal, and these 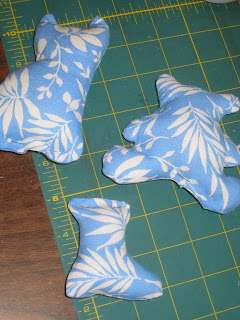 will hopefully be done today.  The ski boot is sort of cute, but the teddy bear is going to be an only child.  It might work if I made him friends in felt so they didn't have to be turned inside out, but no teddy bear should have ever been exposed to the amount of foul language this one has.  And we're not even going to discuss shoving stuffing up a bear's backside.

Later today (I think), I might even try some of the cats in more Christmas fabric.  I assume somewhere in here 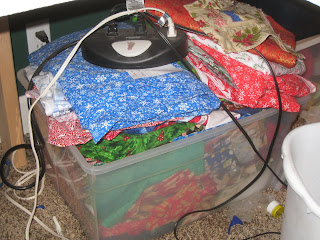 are a few scraps, but if not, this is actually one of the reasons Christmas fabric exists.  Though I also have a few new ideas for ornaments, and the day is still young..............