My back is still sore enough that I have both ventured to take one of the anti-inflammatory/pain pills that caused the ulcer AND I missed my pool walking this morning.  As I am the youngest one there by about 20 years, I am in for some serious ribbing on Monday.  I had even reached a new milestone: 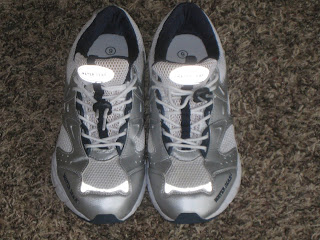 I wore out my water shoes and had to make another personal-spending exception for new ones.  The floor of the pool I go to is rough enough to strip the hide right off one's feet, so shoes are a must, and this time I decided to try water shoes with a bit of support.  The sales lady at the local swim and run shop said they would fall apart in 6 months, but she says that about everything.  She said the ones exactly like I had would last less than 3 months, and they've certainly lasted for more than a year.  The weird thing is, she didn't have a more expensive model she was trying to sell me--she seems to be just a pessimist.  I think the swimming suits I bought there several years ago were going to spontaneously combust in 30 days as well, and they're still going strong several years later.  I hope she's not on commission.

I did get two sets of all my physical therapy exercises done, then I went downstairs to clean up the kitchen a bit before hitting the sewing room, and 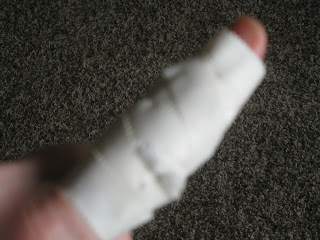 was viciously assaulted by a glass that broke when I was washing it.  It's not as deep or long as the bandage would lead you to believe--it just wouldn't stop bleeding.  Andy was on a conference call at the time, so I had to make-do with the bandages I could work with one hand.  We have a reception to attend tonight, so I'm trying to think of a good story for this.  Cutting myself while washing dishes is only slightly less humiliating than hurting myself while scrubbing toilets or vacuuming (or, for that matter, getting my arse kicked by a Thanksgiving turkey), so I'm leaning toward rescuing a small child from the Doberman that now lives across the street or something involving fixing something mechanical like my car or the furnace--though perhaps the dog story would lead to other problems, like someone asking if I'd gotten shots or something.  How can one cut oneself without sounding like a dope or someone in need of further medical attention?

Of course, the worst part is that with this stupid bandage on, I can't knit.  Luckily I finished up another mitten last night, 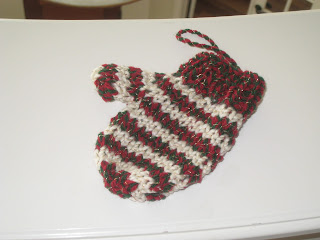 but it won't be getting any little friends today.  Kind of unfortunate, so I'm a little bit ahead of schedule and 3 or 4 of these today would have increased my lead, and with canning season coming on, I may need it.  What do you think the odds are that I could hand-stitch felt ornaments without accidentally stitching them to this idiotic bandage...............?