A Surprise Find And A Knitter's Worst Nightmare.

Out of morbid curiosity, I often browse Ebay looking to see how many embroidery machines like mine are up for sale.  If I can get parts for mine, I think mine could  last another 10 years or more--but the problem is that there's no telling how long they'll be available.  So, I keep an eye out for the embroidery cards and/or the reader/writer I use to transfer designs to my machine.  The last writable card I bought was in a clearance basket (though still insanely expensive considering how little support the old machines get), so you can see why I worry.

So, before we left for Indiana, there were several cards on Ebay.  Usually I don't bother with the ones with designs already on them, because they're still REALLY expensive and I'm not interested enough in the designs.  But there was an unused writable card which wasn't going for much, and a lace card with maybe a $10 bid.  I thought about them for a while, and decided that a reasonable exception might be made to keep Jeeves going for a few more years, so I placed a bid of $80 on the blank card and $18 on the lace one.  An unused card goes for $160, but because one never really knows on Ebay, I was only willing to go up to half--I'm planning to buy a new one from the good Husqvarna dealer in November, but an extra wouldn't hurt.  I was somewhat relieved when I got outbid on the blank card, but for about $20, I am now the proud owner of: 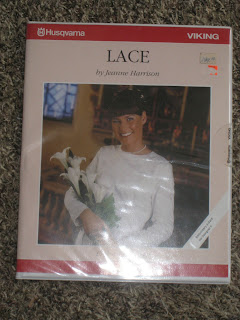 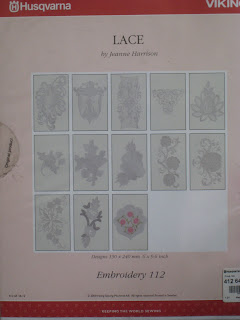 I'd like to say I feel guilty, but I'm utterly thrilled.  The cards don't look like they've ever been used, and the more designs I have on cards the longer Jeeves will last, so that's my Surprise Find exception.

Now, the Knitter's Worst Nightmare exception.  Because of all the stress over Theo before we left, I hadn't really paid attention to the pattern of the ONLY knitting project I was taking with me: 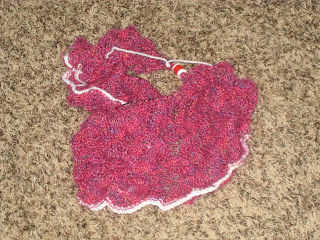 a new lace capelet made with sport-weight yarn and (mostly) size 8 needles.  Had I read the pattern before we left, I would have known that size SEVEN needles were also required, and sooner than one would think.  The pattern (as I found out in the plane) is knit from the bottom up, rather than from the side as most rectangular-ish shawls are, and that one does 2 chart repeats, then switches to the smaller needles for one more repeat, THEN puts the knitting on stitch holders to start the edging.  Having finished the first repeat on the flight, I faced a knitter's worst nightmare:  I could run out of knitting before we got home!  Can you imagine the horror?

Have you ever noticed that there are craft or fabric stores every 20 feet when you don't want them, and every 100 miles when you do?  I didn't want to take extra time to drive out of our way to find a fabric store because we wanted to spend as , but our hotel was near a Walmart, and desperate times call for desperate measures, 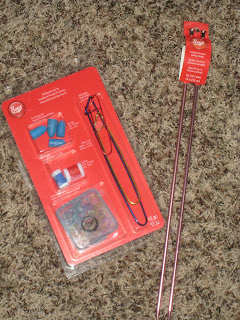 and unlike almost every other needle in existence, I can promise that I didn't get an emotional thrill buying these needles.  I, of course, learned to knit on Boye aluminum needles since they were the only ones available, but I both already HAVE their size 7 needles, they are the absolute last needles I would grab.  But a knitter facing a lack of airplane knitting is a desperate knitter indeed.

To add insult to injury, I didn't end up needing them.  We were usually outside all day every day, and with the heat and the humidity and the 2-hour time change, we basically returned to the hotel in time to crawl into bed, and our last flight was so late that I was too tired to even knit.  So, they are unopened.  We've looked everywhere, but didn't save the receipt.  I think I might save the needles as a gift for a new knitter, as wooden needles can be very sticky for new knitters, though I'm tempted to keep the accessories.  To make myself feel better, I'm setting them aside until after November 1.  I'd like to return them, but last time I tried--which was, admittedly, more than 10 years ago--Walmart was a total stinker about returns of any sort.  I suppose one would be when one sells crap in the first place.

I will never, ever, EVER fly travel without checking my knitting ahead of time--it's just too stressful to contemplate, especially since it resulted in having to shop at WALMART.  *shudder*