Thursday night I had some spare time, so I thought I'd get a head start on Finishing Friday with three new icicles, 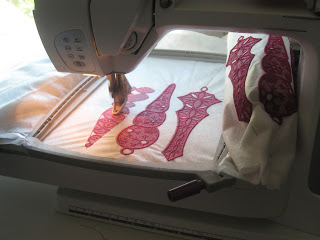 and three new patchwork ornaments, trying some new methods of tracing the pattern onto the felt, 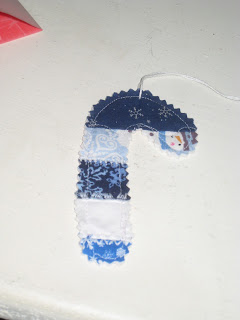 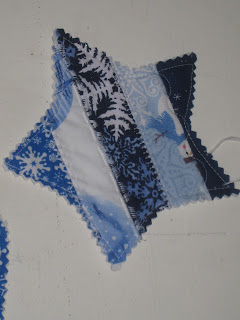 none of which worked any better, and I seem to have not photographed the third one.  Oh well,  it's a heart--pretty much like the last one.  I think we can now say that THREE strips of fabric was maybe an over-estimation of how long my interest in these would last.  They are a great way to catch up on my ornament tally, and I do like them, but I am now counting the days until I can buy fusible webbing and new marking pens.

I like the hand-stitched look on ornaments, so both to solve the tracing problem AND try a new look, I made a stocking which I could cut out first, THEN stitch. 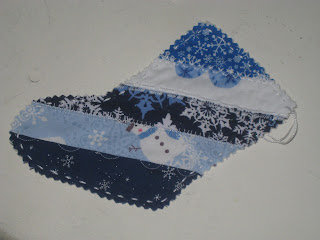 It worked reasonably well, though I need to practice a bit to get my stitching a bit more even, and it's hard to see in spots, but I thought it turned out reasonably cute.  And, while I think it would look better on a solid ornament, maybe these are a good place for me to practice.

So, I went in to Finishing Friday with SEVEN new ornaments..........and didn't get any crafting at all done.  Instead, 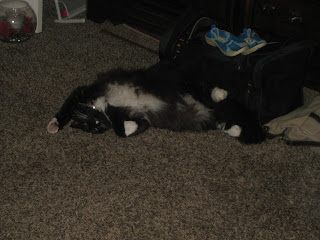 we went to the vet.  After our first disastrous episode with the pill-cat scenario, I thought Theo might heal faster WITHOUT additional stress.  So, we skipped the pill episode Wednesday night.  By Thursday morning, he was back to trying to urinate with no success.  So, I gave him one of his pills, and I think we were both surprised at how quickly it worked--Theo was obviously caught off-guard and I must have had a stroke of brilliance, because it's the only pill that we are positive made it INTO the cat.  When we tried Friday morning, with the combined efforts of Andy and myself, I'd say only trace amounts of that pill ended up in the cat, and we are signing Theo up for the kitty-spitting Olympics.   At this point I got worried, because if Theo's health depended on us getting those pills inside him, we were going to be in trouble.  So I called our regular vet, explained the situation, and asked if the medication came in liquid form.  It didn't, but they suggested I bring him in.  So, I cornered my already-stressed out kitty and drove him over to the vet......where we discovered that the pills we came home with were an anti-anxiety pill.  Now, those of you who have cats can probably see the problem here, but if you don't have cats, let me assure you that the fastest way to INCREASE the anxiety of all concerned is to try giving a pill to a cat, so I think whoever came up with an anti-anxiety PILL deserves to be smacked soundly by every cat-owner who has the battle scars from administering the darn things.  I thought it was a pain pill.  His regular vet checked him out, made sure his bladder wasn't full, and gave him a 72-hour pain INJECTION.  It has made him lethargic, which we're kind of hoping will make him forget the pill episode, but Andy and I might need therapy............