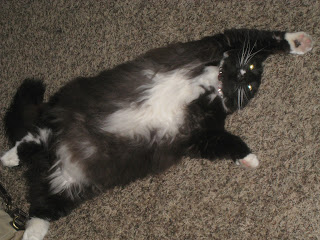 is a cat with stress issues.

We flew out to Indiana for Andy's family reunion obscenely early on Thursday morning.  Because it's such a busy time of year for our friends, how much I would worry about fires with the drought this year, and because I wanted to poison the little vole-monsters who have been plaguing the garden all spring, I thought it would be a brilliant idea to board the cats while we were gone.  Because of our travel times, the cats were due to check in the day before we left and get picked up the day after we arrived.  I made the reservations well in advance, made a copy of their immunization records, and thought I was really pretty clever for coming up with this whole idea in the first place.

STILL feeling like I was planning ahead, we dug out the suitcases Tuesday night.  I have joked many times about Theo getting upset when he sees suitcases come out because he hates change so much, but I always thought I was just joking.  As we now know--it's really true.  I woke up at 6:00 AM Wednesday morning with a kitty who was trying to urinate about every 10 minutes but couldn't.  Urinary tract infections are painful enough for anyone, but for male cats they can be quite dangerous.  Theo has never had one, but my old cat, Catanova, had, so I knew the problem.  So, rather than checking them in later in the afternoon after a trip to the gym as I had carefully planned, I collected the cats and took them to their hotel early so the vet could have a look at him.

It turns out that there are two things that can stop a cat from urinating:  stress, which causes inflammation of something and results in blood in the urine, or a bacterial infection, which is the one that can kill male cats.  But it also turns out that a stressed-out cat can hold his bladder for a good 24 hours.  The vet checked him, thought he looked okay, put him on a pain-reliever after I explained that he had been trying to urinate all morning, and said they would keep me posted.  So, rather than getting to worry about the house burning down with the cats trapped inside, I got to worry about my cat's urination problems--because boarding one's cats in a cat hotel just isn't weird enough on its own.

Now I don't know what your experience has been with vets, but mine has been all over the place.  We've had the wonderful people who took care of Theo when he broke his leg, and I've had two of the I-need-a-new-boat vets--one of whom ran several hundred dollars worth of tests when I took Catanova in for fur falling out and sent me home with shampoo for a skin irritation which wasn't a symptom of anything they tested for (and, to add insult to injury, was--until that point--a friend of mine), and the other one wanted to operate on Theo shortly after his leg saga to REMOVE the pin in his leg when I took him in for a coughing problem that would turn out to be asthma.  So, I was a bit worried that they put him on pain medication instead of antibiotics, and then was REALLY worried after the vet called and didn't know that Theo had been trying to urinate since before 6:00 AM and couldn't, in spite of my telling at least 3 people, including the one I called to ask if I could bring him in early to have the vet look at him.  I suppose it's possible, of course, that among their circles of friends they regularly discuss cat urinating in normal conversation, but I was sort of thinking that at least one of them might be writing it down so the vet would know why she was looking at him in the first place.  I shall know to always look for pens or typing in the future.

We had been trying to make sure everything went smoothly, because this was the first time I'd tried traveling since I hurt my back, and stress makes my back worse, and the Valium was only going to be helpful in a limited sense because the amount needed to relax REALLY tensed muscles is also the amount that would have made it really hard to get me off the plane in Denver and onto a connecting flight without the aid of a stretcher.  Luckily--and I'm sure I'll never say this again--getting up at 4:00 AM makes one groggy enough to compensate for the lack of drugs.  We had some time in Denver, so I called again and luckily Theo had urinated and did have blood in the urine, so it was just inflammation, and they were going to keep him on pain-killers and an anti-depressant while we were gone.  So, I enjoyed the rest of the trip with feelings of guilt rather than worry, which is a slight improvement.

We arrived home Monday night sometime after midnight, and set off to rescue the cats pretty early yesterday morning.  They received a report card for their behavior, 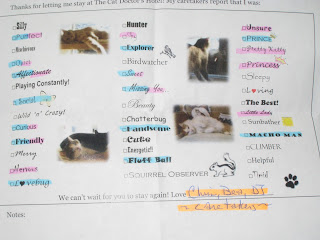 which seemed pretty cheerful as Calisto growled and hissed all the way home.  I suppose "was a total jerk" and "terrified" doesn't earn repeat business.  Theo was sent home with pain-killers in pill form for a play-at-home version of the torture session, and it's possible that we gave him one last night.  Two humans, an 18 pound muscular cat, and half a turquoise pill made for an interesting evening, and as we could no longer find the pill anywhere, we think it might have ended up IN the cat, but it isn't certain.  I'm speculating that NOT giving the pills will help relieve the stress and the inflammation faster than GIVING the pills will, but I'm keeping a close eye on him.

The cats were glad to be home and spent most of the day in the backyard, 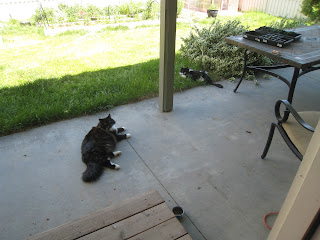 but it took several hours to forgive Andy, and I--as the instigator of this whole horrible episode--have only gotten back into kitty good-graces this morning after a great deal of groveling and a solemn promise to find a cat-sitter next time.........