In spite of the fact that I have fallen drastically behind in my ornament-making plans, for the record, these 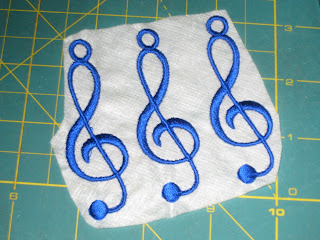 weren't just an attempt to make fast, quick ornaments in a desperate push to catch up.  Or at least, not entirely.  These exist because of this: 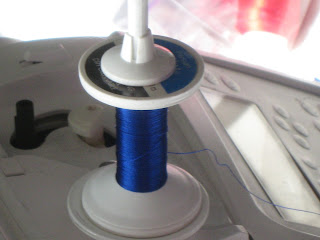 Sulky embroidery spools like this hold 850 yards of thread.  Which is fine, except that every thread manufacturer uses a different type of spool.  I don't know if this one has a thick or thin center, so while I'm pretty sure there isn't enough thread left on the spool to make a snowflake, I don't actually know how much IS left.  Lace ornaments like this have to have matching thread in the bobbin as well, so I'm making the small ornaments with this so I can use it up without running out of thread in the middle of anything.  I do love the embroidered lace ornaments, but they are thread pigs.  So, there is a point to this BESIDES desperation.

I got the red ornaments blocked, and since they curl when drying, this time I tried sandwiching them between baking racks, which seems to have helped, 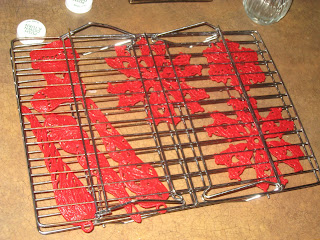 The icicles still curled just a bit, so I might try adding freezer paper or wax paper to this set up next time.  But, it worked for the egg ornament, so yesterday I tried assembling the first half: 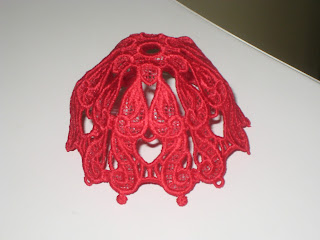 and after many different versions, I found a size 1 knitting needle and tweezers to be the appropriate tools for such an adventure.  The directions call for a hanger involving Styrofoam balls and tiny screw eyes, which of course I don't have, so I'm going to see if I can do something involving large clear buttons, which I think I have.  They buying ban is certainly testing my creativity, if not yet making a visible dent in the sewing room.

Having decided that Andy's ornament patterns didn't have to only be done in white, 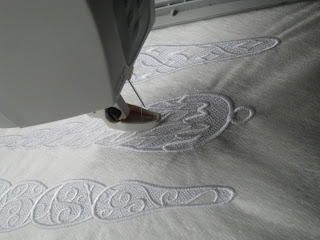 I rewarded my new open-mindedness with 3 white icicles.  I love these ornaments.  There were six different designs in the package I bought, and if they ever release a second set, I'll be snapping those babies up immediately...er, after the buying ban ends.........

While Jeeves cranked away on ornaments, 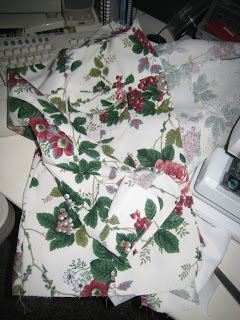 I made great progress on the jacket.  Now I remember why the first jacket took so long to make. Home decorating fabric, while looking fabulous, is rather slippery and frustrating, so the top-stitching (which is everywhere) leaves a lot to be desired.  But once it's done, I know I won't notice.  For one, there have been a lot of drugs in my life this year.  For another, I've come to realize that even the worst projects I have made still have better construction than the clothes one can purchase, and I've rarely noticed that sort of thing on commercial clothes.  One sleeve is attached, the other ready to be pinned, then there's top stitching, facing, and buttonholes, and it will be done!!!!!!!!!!  And my next sewing project will be fuss-free cotton.  Or more felt ornaments......


Speaking of which, while I've been updating the blog, 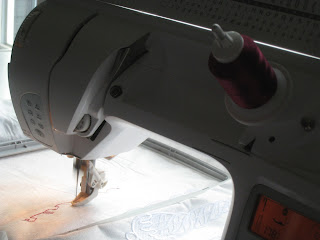 Jeeves has been hard at work making ornament number 89.  I have branched out so far that there are about to be 3 icicle ornaments in 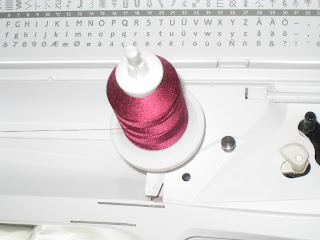 a dark rose thread.  I love doing theme trees, and wouldn't this look just wonderful on a Victorian tree?  And I swear I don't just think that so I can make more icicles.  Really............