I have another completed ball ornament, 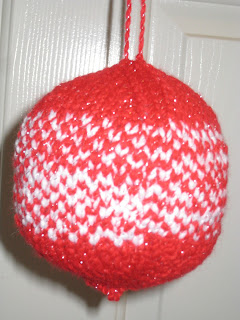 which I'm not overly pleased with. This is the first one I've made with the two-colors on every row of the center, and the colors get muddled.  Oh well.  I have two trees to decorate, which means I also have two backs of trees to decorate.  Looks like we'll be keeping two categories of ornaments this year:  my favorites and the ugly ones.  THAT should make an interesting decor scheme......

Having a ball turn out badly--or perhaps having made so many already--I've grown a bit bored with the improvised balls, so it was time to look for a new ornament pattern 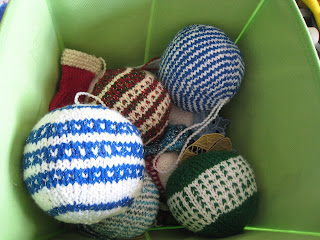 ideally one that didn't take up as much room.  So, 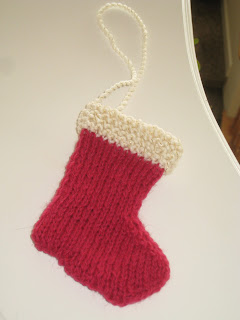 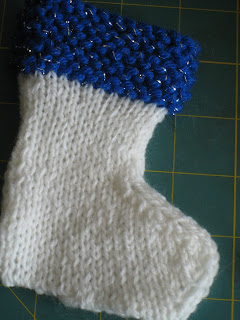 We have knitted stockings!  A little boring, perhaps, but quick and still pretty cute.  Maybe I could attach some stockings or beads or do a tad bit of color work on one?  Or a knitted-on lace cuff for contrast.......?

There was finally a bit of sewing today, so Andy's shirt is progressing. 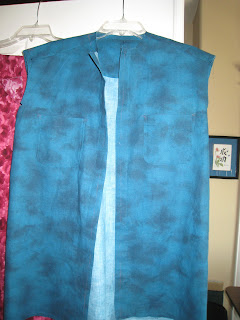 Do you ever notice how much easier it is to stop projects for the day when you reach the part you like the least?  Anyone who has sewn men's shirts can probably guess what part is next........Yep!  It's time for the collar.  And to make it even better, it's a two part collar.  My secret suspicion is that they structure the pattern steps so that you've already invested so much time in the shirt by the time that you get to the collar that you're more likely to plow through it to get a finished shirt.  I mean, if that was the first step, would anyone ever even START a shirt?  I certainly wouldn't.  BUT, this does mean that Andy's Valentine's Day gift could be finished before February is over.  That would be good.....and, perhaps, a bit shocking............