I've had three really good "back days" in a row, so yesterday I felt good enough to kick off Finishing Friday with a blanket repair job that I've been meaning to get to: 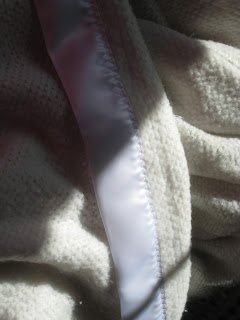 The original satin edging had ripped across the top and formed a very strange string, so I had ripped it out one day while doing back stretches, and raided my stash to find a new satin binding for it.  Ivory would have looked better, but I didn't have that, and it's for the guest bedroom, which I assume no one checks for exact color matches.

It's always sort of a risk to start my day with a repair that I haven't done before, because if the repair goes badly, nothing else happens, but I did it on the first try, and was still feeling good enough to lay out the rest of the fabric for Andy's ensemble on the floor 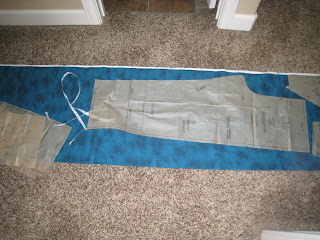 and finish getting it all cut out.  My back didn't last long enough to finish anything, but one of my Ravelry groups is having a virtual "sew-in" today, so this morning I did finally finish up the pants: 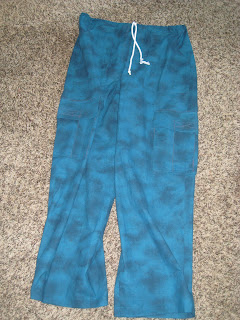 I think I have just uncovered another issue in my "buy nothing" program: 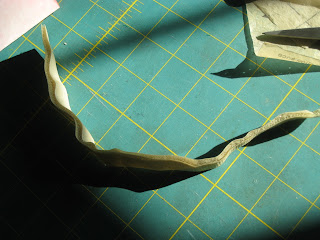 This is all the Velcro I have left.  The cargo pants use about 6 inches (3 for each pocket), so I have enough for one more pair or probably one more project.  I don't think it will be a big issue, but certainly one that I need to keep in mind.

Some of it might be sheer optimism, but there REALLY is a slight dent in the stash: 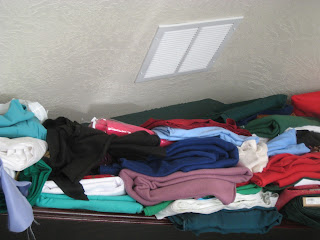 which I think gives me enough room to at least eliminate one of these: 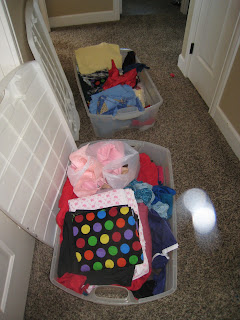 These containers had been in the garage since the shelving project.  I was REALLY pleased to find a mostly-full bolt of red cotton fabric as it's probably the color I use most and I was actually wondering if I had enough on-hand for the year.  I was also very pleased to find that fabric with the small pink flowers.  It's an inexpensive flannel that I can use for backing without wasting anything good or having it show through anything.  I also found a quilt top AND the backing fabric, which would be my oldest quilt WIP and would be REALLY fun to finish this year.  Especially since it is a gift for one of my bridesmaids, and Andy and I will celebrate our seventh wedding anniversary this year.  Let's just say it's a well-aged quilt by now..... 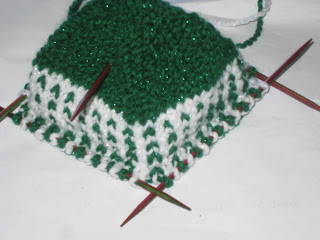 there's a new Christmas ornament.  My interest in the knitted mitten ornaments has rather faded, but I'm having a fabulous time with the round ones, though with the acrylic yarn the shaping comes across as more square than round, so I think I need to change them a bit.  But they're quite fun to play with and will make fun gifts.