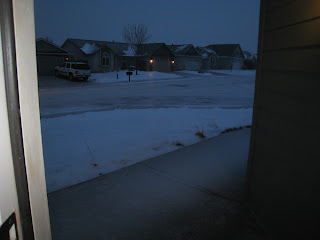 that we got freezing rain last night and everything is covered in ice.   It's supposed to get all the way up to 35 today so we can get some serious snow, but they've been saying that for a couple days.  So, my planned errands for today will have to wait--possibly for spring.

Andy arrived home safely on Tuesday, which we were both really thrilled about as being away for more than a week gets very, very long.  I didn't get as much done in my crafting vacation as I had hoped, but I did finish it off with 3 new lace icicle ornaments 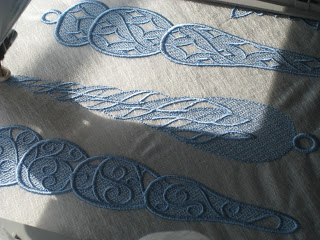 which I think look nice in light blue.  White would, of course, be the most logical color, but I still have lots of other ornaments to try and some of them will need to be in white, so I'm trying to not go crazy on the icicles--as tempting as they are.

And speaking of thread problems, I did start sewing the new ensemble together, only to discover this: 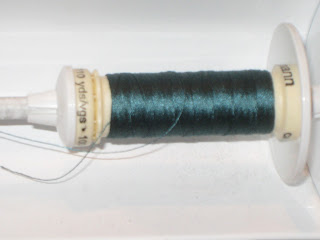 is the ONLY spool of thread I have in the closest matching color.  I probably should have actually checked prior to starting the spending ban, but with this: 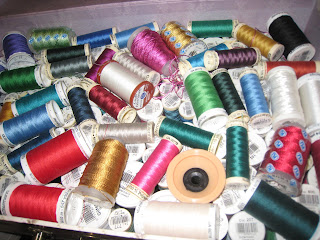 I honestly assumed that I had an extra spool of every color on-hand.  But, as it turns out, the color I probably sew and wear most often is THE ONE COLOR that I only have half of a tiny 110-yard spool of.  Clever.  Since I'm doing seams right now, I've switched to the darker teal thread you can see in the lower right-hand corner as it's close, but I was really pretty stunned.  One of the reasons I'm doing the buying-ban is because I feel like I have been buying thread and zippers and buttons more for the sake of buying something when they're on sale and not using them nearly as fast as I buy them (which is probably the case), and have been really rather pleased with myself each time I use up a spool of thread.  In fact, I've been keeping the empty spools in a bag both to sort of track my stash-using progress AND because I want to use them to make a Christmas wreath for the sewing room, which I think would be fun and festive, and might force me to finally come to terms with that blasted glue gun.  I won't be nearly as pleased to finish up this particular spool...

One big accomplishment for crafting vacation is: 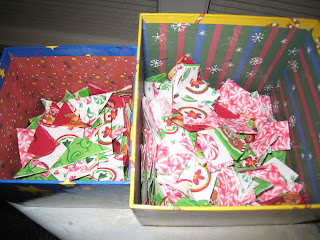 on the left are the triangles ready to be used for ornaments, and on the right, all those silly little rectangles have been folded into squares with one edge turned up 1/4 of an inch.  Ideally, ALL of them would now be in the box on the left, but this is a REALLY time consuming little project.  I keep reminding myself that this is the hard part, and as soon as this is all done, it's just putting the ornaments together, which helps.  But thank heavens I don't need 365 of THESE ornaments!

I still get sore and tired in the afternoons, so 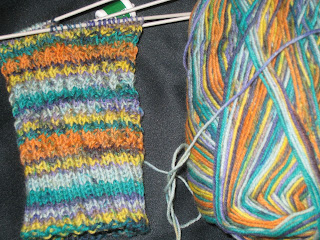 there has been knitting!  This is a little twisted rib (3 rows of K2, P2, then 1 row of a 2-stitch twist, p2) which is working really well on the self-striping yarn, I think.  This isn't the best self-striping yarn I've ever used.  The ones I prefer are printed so they actually show a true pattern like these: 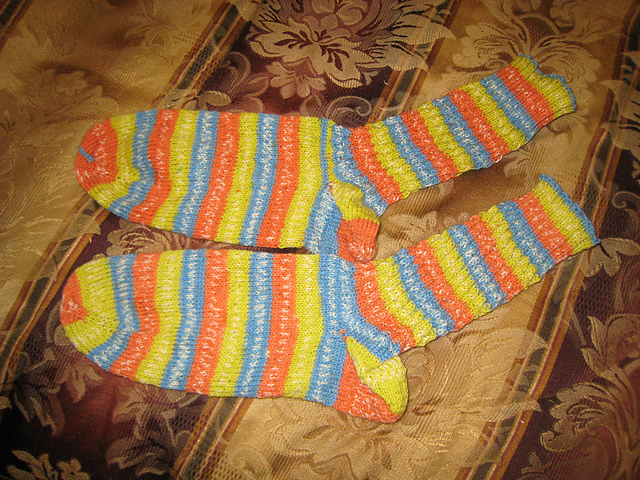 but I do like the colors and it seems like it's harder to find sock yarn with the more pronounced patterns.  (Not that I'm still looking FOR sock yarn, of course.....)  But at least I like the pattern and the recipient will LOVE them, AND I've found a cuff-down pattern for striped yarns that I like. For these socks, I used a toe-up pattern, and I always got ONE heel to look perfect with the short-row heel, but I could never get BOTH of them to work. Of course, to be fair, I doubt anyone's FEET are perfectly symmetrical either, but I'm not in charge of that......