On The Eve of Insanity

First up, rounding up all my Christmas books for ideas.  When I first dreamed up this daft scheme of mine, I thought I would spend the months leading up to it making a nice list of all the ornaments I wanted to make, which books the pattern or idea was in, and making myself a little index.  Yeah--there were some good drugs involved.  You have probably already guessed how many ornaments are recorded in my handy little index......

Yep--none.  Today I did at least sort through the sewing room looking for Christmas books, and got them all together in one shelf: 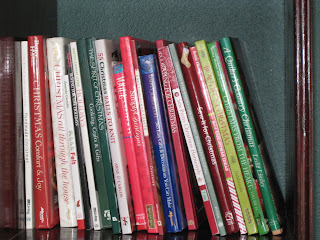 and the part of me that wasn't relieved that they would all fit in one shelf is dreading that there are a bunch I haven't found.  If there are, maybe I'll ignore them until April.  This seems enough to be getting on with.

In my most panicky mode, I cut out a few mitten ornaments to give myself a head start: 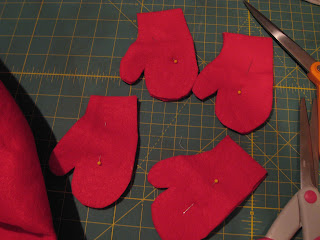 and 4 similar ornaments almost felt a bit Stepford until I remembered the part about needing 365 ornaments.  There may be some mitten mania shortly.....

I also thought I would play around with my new thread project but with a bigger piece of fabric: 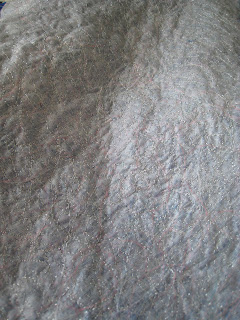 wishing I'd discovered this idea before starting on the buying ban and being unable to buy more see-through stabilizer.  As it turns out, 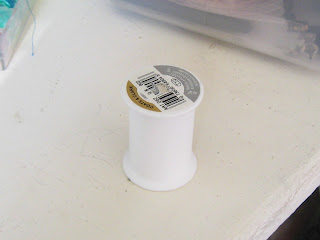 I just finished off the silver thread as well, so it won't really matter.  I still have the gold to play with 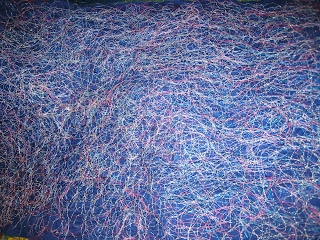 but I will never again be so insane as to do this on a piece of fabric longer than 12 inches on any given side.  It'd just too cumbersome to try to keep the thread in place AND stitch it down AND get it covered evenly.  I'm happy with the results, though, and since it is going to be the only large piece ever, I think I'll make a project bag out of it.  Like maybe one to hold cutout felt mittens......?