A Wee Bit of Finishing Friday

As you may have guessed, life is not really normal here right now.  Yesterday was my birthday, and to celebrate I slept.  I never nap, but I was exhausted.  Or the 1/4 of a valium tablet I took to help my back knocked me out.  One of the two, or maybe both.  I had intended to sew or embroider, but it's been a long, stressful week and my back was too sore to sit.  Today I did fire up Jeeves for another napkin, 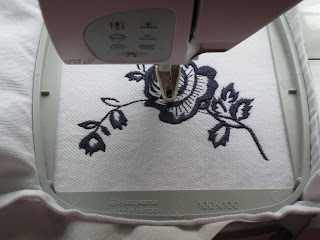 (now that I have some navy thread), then hit the Fred Meyer deli and headed down to the hospital.  This is Dad's third week in the hospital, and I think he'll be in there at least a full month, so I like to get him outside whenever we can, so we had a picnic today for lunch.  He's still actively cattle ranching, so this being inside--much less in bed--for weeks is really hard on him.  Because of all the IVs and stuff, I have to take him out in a wheelchair, which was a bit strange to get used to, but he does get up to do walking laps in the hall a few times a day.  The nurses have learned that they have to be pretty quick to keep up with him, and I think he's worn out a few.  He's feeling good and the drugs are working, but he's been a very sick man and he still has a long way to go before he's completely better, but the good news is that he'll feel pretty good most of the time from here on out (I hope).  He'll have another MRI tomorrow to make sure they got everything when they operated on the spinal abscesses, but we're pretty confident.  Meanwhile, 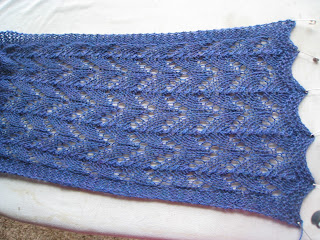 the "oh-my-goodness-I-need-portable-knitting" scarf is progressing nicely.  I've used this pattern before, and it works well for hospital knitting because it's an easy pattern to look at and know what to do next.  Unlike: 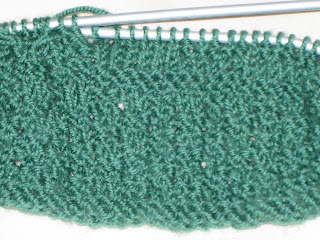 my Alice Starmore sweater, which needs the pattern book AND my full attention.  Which it only gets for one or two rows at a time.  Probably not a candidate for the 12 sweaters challenge...........