Bob and Ron have the weekend off, so I thought I'd do a quick update without them. I have had a weekend all by myself.  This was not actually the intention, as we had agreed to go on a 3-day camping trip with friends, but my back could neither handle the car ride there nor (most likely) any part of actually being there, so Andy went with our friends and I have had a resting/crafting weekend.  The fact that MY weekend involved indoor plumbing was an added bonus.

I have 2 more mitten ornaments: 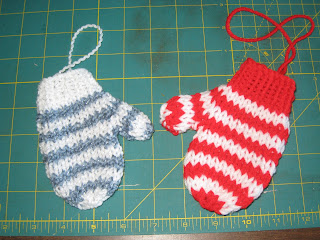 a pair of fleece pants finished (which are in the washing machine which makes them difficult to photograph, but you can take my word for this one),the start of a Mr. Flurry snowman: 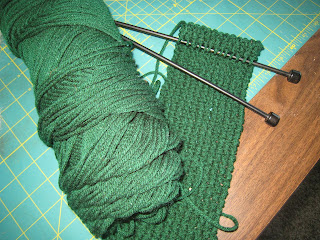 a potential project for my "high jump" item: 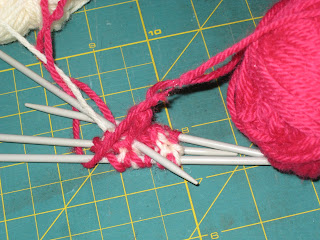 which is a brioche stitch hat.....that currently makes me want to drink heavily, but I'm hoping will improve once I get past the beginning whole-bunch-of-needles-and-few-stitches nightmare.  This is why I generally prefer hats that start with the brim--by the time I get to the most troublesome part, I have already done all the work and am so excited about having a Finished Object that I can plow through even the slipperiest yarn/needle combination no matter how obnoxious it is. BUT, I'm hoping something will drive me back to finishing it.....like maybe this: 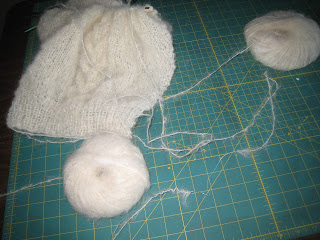 The mohair sweater!  I'm onto the sleeves, and really have been trying to be dedicated to the blasted thing, but this 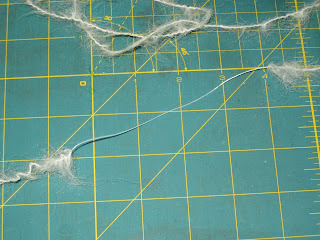 is happening more and more often (or maybe it just seems like it because I'm working on two balls at once as I'm making both sleeves at the same time).  This was some unnamed mohair yarn I bought by the bag, and since it was inexpensive, I'm guessing that the problems were known and it was being discontinued, which I should have questioned.  I'm not really ready to give up on this sweater--I do have the back and both fronts done--but we need some time apart.  So, whether I'll live up to Gaidig's dare to finish this thing before starting the purple sweater remains to be seen.  I'm holding a few WIPs that can compete in the Ravelympics because I think that's what I'll do for the games this year, but there might be something to pull out and work on for a bit that I don't want to send through the food processor.......

One of the Training Camp "to-do" items is to either frog something, give away yarn, or give away something you know you're just never going to use.  After much sniffling, this: 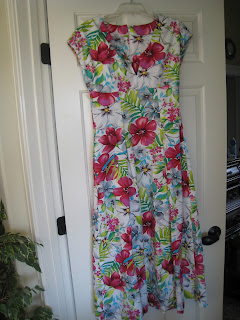 is shortly to be on it's way to one of my closest friends.  When they were visiting last time, I had her try on several dresses I made to see which ones would be most flattering, as I was going to make her a dress for her birthday (which is still the plan, just hasn't happened yet with the "back/sitting" issues around here).  Anyway, this was very cute on her, but has only fit me if I don't move my arms.  I thought, "Well, I'm sure I just need to lose a couple pounds and it will be fine..." but thanks to the nausea-inspiring pain pills and the incredible schedule of physical therapy/weights/exercise I've been going through for the last 6-8 months, I've probably lost FIFTEEN pounds since then, and I still can't move my arms when I wear this dress.  It's the shoulders--I have very broad shoulders for a woman, which is why I generally favor sleeveless things whenever possible.  And.........I got lazy.  I didn't do the measuring, I didn't do the fitting--I just looked at the pattern, said "oh, it's sleeveless, it will be fine........" and made an adorable dress that I cannot wear.  So, I've decided to admit defeat, send it to my friend so I can be happy that SHE'S got an adorable dress that looked VERY cute on her, and I will remember to check the fit next time.............

But to end my weekend on a high note, 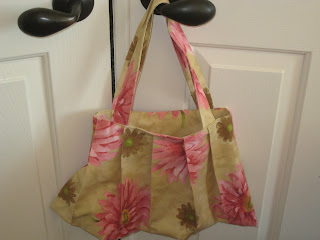 I made a cute little handbag last night.  It was surprisingly easy, though it's made with home decorating fabric and not the vinyl it was supposed to be, so it won't be the most durable purse ever, but I'm just incredibly pleased with the thing.  I'd found this fabric on clearance for something outrageous--like $2 a yard, and bought it to make a few shopping bags, but I've never been able to convince myself to use up such cute stuff just for groceries.  So, I have a handbag............and I still have enough for a grocery bag or two. At first I was a bit disappointed that I couldn't count this for one of my "12 12s," but then I realized that it's a BAG, so it gets to count as a bag--which makes a lot more sense than trying to justify to myself how one really WEARS a handbag, rather than just carries it.  Thank heavens I didn't have to try to pass it off as a Christmas ornament!