Yesterday while doing my physical therapy exercises, I managed to do something that actually made me hurt in all sorts of new places, so aside from dealing with the humiliation of hurting myself WHILE doing the exercises designed to make me better, I got to spend another day pretty looped up on pain medication.  So: 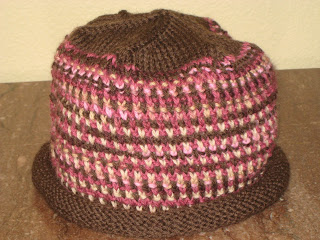 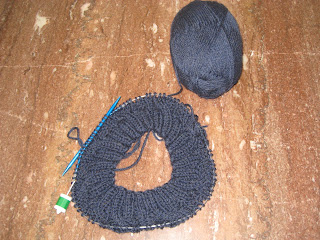 started another one.  I think even at my most loopy I can create vaguely head-shaped things provided they don't have to match anything, so until my back mellows out a bit, hats are my friend.  And, probably far more importantly, my political consulting hours are finished, and I have withdrawn from the campaign until (and if) I can get my back under control.  It was actually a tough decision, but I have now had to pop my hip back into place twice in the last week, so the deterioration of all that progress was happening too rapidly to ignore.  Until I'm fully healed, I just can't handle anything quite that stressful.  So, I should have LOTS more crafting time this month........even if some of it is a bit loopy.

I did start cutting out the fleece ensemble: 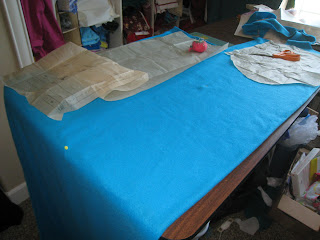 though I haven't made it very far.  I have a great pair of spring-loaded shears that work great for fleece and heavy fabrics.........and they weren't with the other scissors.  This is going to be a long process.  So, no new sewing for the month, unfortunately, and since I can't imagine finishing the new hat in one day (good heavens--I become RATIONAL when looped up on pain pills!), my May totals stand thus:

Aside from the fabric tally, not bad for such a crazy month.  I didn't count any yardage for the mitten ornaments because it's so very minimal, and even with the slower pace, I'm averaging 1545 yards knit per month, which still puts me on target for 18,500 yards used up for the year, which would be my second-best year ever.  AND, even better, I would finish the year with 18,500 yards of yarn no longer in the sewing room!!!!!!!!!!  And not just because I couldn't fit it back in............