Abby brought up an interesting question about my last post:  Have I achieved SABLE, would I want to knit exclusively from stash for the next several years, and do I have yarn that I should give away?  After having schlepped all my yarn around the house, it does feel like I have a life supply of yarn, especially since these 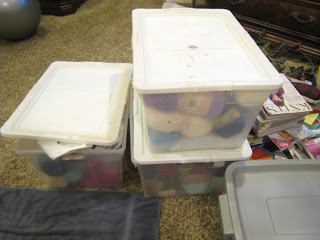 were holding up my stereo in the sewing room, and when opened 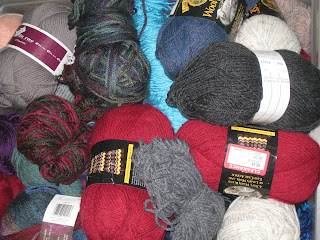 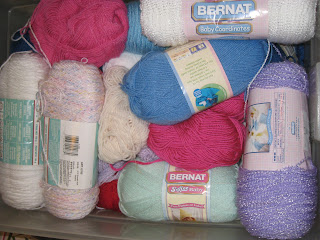 revealed yarns that I was relatively were not all represented on Ravelry.  I was happy to find that SOME of the yarn was indeed already accounted for, and have spent a fair bit of the morning adding most of the new yarn to Ravelry.  According to the latest figure, I have just under 190,000 yards of yarn.  I wish I could say I thought, "Well, haven't seen it for a while so I can part with it," but I didn't.  When I found a pretty large amount of Lion Brand Wool-Ease worsted, my reaction was, in fact, "Yippee!"  It's one of my favorite yarns for scarves as it's a wool blend that isn''t too expensive and quite decent for hats and scarves--two of my knitting gift standards.  The acrylics are my baby sweater stash, having LONG ago given up hope of anyone being willing to hand wash sweaters for babies.  So, it will all probably get used.  I have the feeling that there will be more than one baby sweater involved in getting to my 12 sweaters for the year, which is a good thing as we seem to be caught in another baby boom amongst younger relatives and my baby gift stash has dwindled.

It's hard to say how fast I knit.  My best yardage year (since I've been counting) is just over 19,000, and my worst is just under 14,000.  It's always a bit skewed as every year has involved reknitting at least one skein (and I don't count them until they're actually gone from stash) and it depends on what sort of knitting I'm doing.  Lace, beading, cables, etc.  Then there are the projects that don't get counted--like the mitten ornaments, anything involving the cheap acrylics that doesn't involve knitting (doll hair, crafts),  some of the dish cloths or anything involving just odd bits that don't make sense.  My 4 year stash-tracking average is about 16,000 yards a year.  If we use that, I have enough yarn to knit solely from stash for 12 years.  Which is a lot, though since I'm 41, hopefully not S.A.B.L.E.  However, that does rather encourage me to limit the "reward for going cold sheep" purchases quite severely.  Maybe 3 more years of hard-core cold sheep, then--if all goes well and the size of my stash drops by the projected 50,000 yards of yarn, I could revisit the idea of a reward system.  After this year's sweater dash, them maybe a run of gifts next year (baby sweaters, scarves, hats), and a little less focus on shawls for a bit, I could significantly decrease the overall BULK of the stash, which is the most overwhelming part of it now.  Though now that I've moved ALL the boxes around in the sewing room, at least I no longer fear that there's even MORE yarn lurking somewhere.  It has all been delurked and will shortly be accounted for, so there should be NO MORE SURPRISES.  Thank heavens!  I might be philosophically okay with my stash now, but uncovering yet another tote might positively do me in!