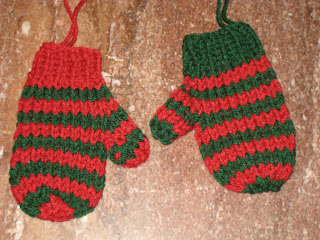 I need only 19 more projects for the year.  I had thought about trying to make a mitten ornament every day until Christmas, but for right now that project has been put on hold to make 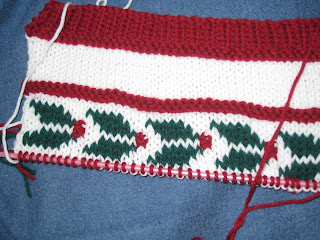 a set of Christmas stockings for some friends.  There's a name on the flip side, but that would ruin the "surprise" part of the gift.  Originally I thought I might sew them, but I haven't knit stockings for anyone in years, and after some discussions with mutual friends, I decided to knit them instead.  I used to knit personalized Christmas stockings for close friends when they got married, but after going through a period of giving stockings that were never used, I sort of lost confidence in them.  It's sort of silly, really, as more of them have been happily used every year than the ones that weren't, but  it is really hard to know that you've spent hours on a gift that someone didn't like and doesn't appreciate. However, I have finally realized that the people who haven't used them because they're looking at them as THINGS rather than expressions of friendship tend to not have many friends.  But they probably have a lot of things.  These stockings, however, will be making their home with some truly knit-worthy friends who will, I am sure, love them.

I have also spent some time with the BSJ, 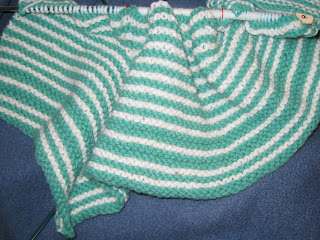 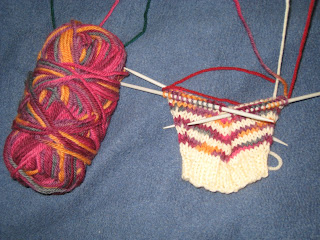 That's right!  Another pair of mittens!  I was really torn between keeping the mitered mittens and giving them away until I realized I had enough yarn left over to be able to do BOTH!  Sometimes I need a little help with being able to "share...."