I'd like to say I avoided the garden all weekend long, but I'd also like to be taller and able to knit 35,000 yards of yarn a year AND buy unlimited amounts of yarn AND have unlimited storage space for yarn, so I try not to pay too much attention to such wishes.  As promised, the finished socks: 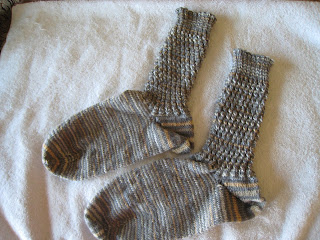 It's my standard toe-up sock with a very simple K2, p2 rib that shifts one stitch after every 4 rows, and I really like how it wears, as well as how it looks with the striped yarn: 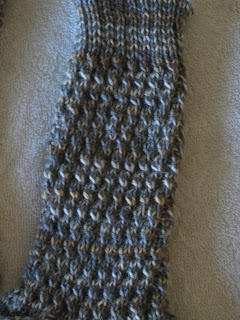 Of course, MOSTLY I like that it used up 460 yards from my stashdash basket.  YAY!

The new hat got lots of attention, 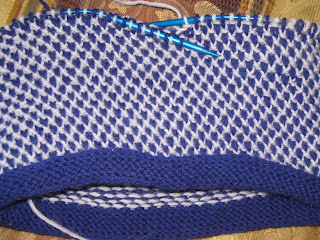 and is almost ready for top shaping.  The pattern calls for 5 inches on the sides, but I have one of these and it's just a bit too short to go over my ears for when it's REALLY cold, which is actually the only time I wear hats, so while I love how my hat looks, my ears are freezing which makes me cold and the hat completely pointless.  Which is the longest way I could find to say that I'm making the sides 6-inches tall instead of 5.

The new scarf is making some progress as well, 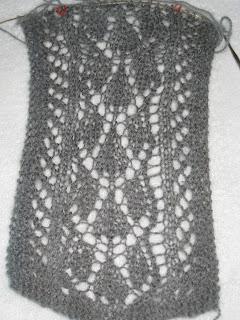 and I'm loving the results.   Of course, I suppose the center doesn't really look like thyme--not that I would know as I keep killing it in the garden, probably because everyone tells me it grows like weeds and can be used as a ground cover.  Only calling it "impossible to kill" would seal its fate in my hands faster.  It probably looks a bit more like basil, which I am happy to report that I CAN grow, but there isn't a song about basil and rosemary, so.............Rosemary and Thyme it is.