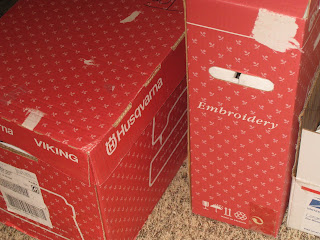 That's right--I'm having Andy drop Jeeves off at the dealership today, as even the thought of having to go near those bastards has kept me up for two nights now.  BUT, remember how they said it was skipping in mid embroidery because of the amount of stabilizer I was using?  Here we are with one layer: 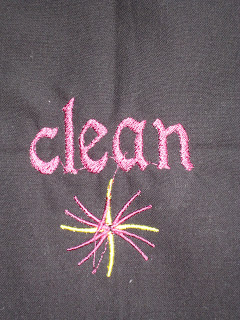 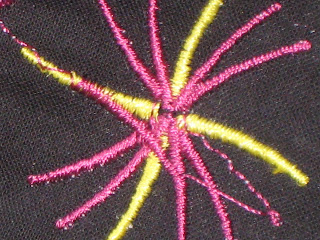 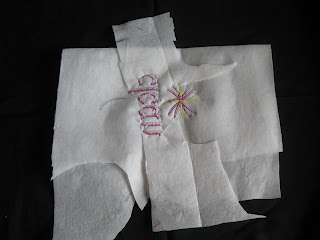 and the one layer that was okay because it was done by THEM and not by little lowly ME: 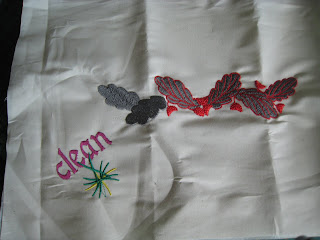 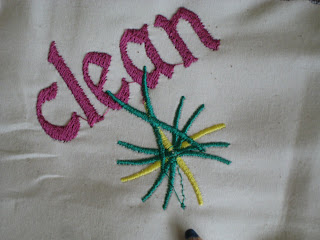 So, not that it isn't possible that the bastards at Hollands will still try to claim that it's a stabilizer problem, but I'm sort of betting they'll have a new solution this time.  And, I thought it might be fun to take a bit of a survey to see what we think they might come up this time.  Possible things they will blame it on:

*  Somehow I have surge protected it wrong
*  Global warming
*  I'm a girl
*  I'm using the wrong material
*  Martians
*  I own cats instead of dogs
*  That it might really be a defective circuit board after all since the customer has insisted over and over and over that this is the exact problem that started all of this last JUNE.

Now, before you pick one, I should tell you that this morning--before I could put it off because women are ingrained to not make waves or complain--I filed a complaint against them with the Better Business Bureau, and on the accompanying documentation that will go with Jeeves to the shop, I have told them about the complaint.  I'd like to say I'm sure that it will have an effect, but I think by now that I would never make an assumption about Holland's Sew Shoppe and the pig-headedness of their "repair" guy.

And, I have finally found another repair person!  He's 142 miles away, but luckily I have a small car and frankly, I'd drive twice that distance to never deal with Holland's ever again.  So...there may be a light at the end of the Husqvarna/Hollands/Hell tunnel after all...............