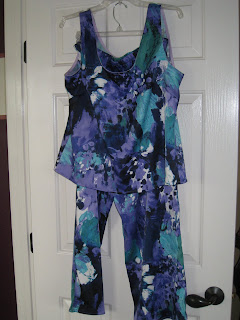 I was "cleaning" the sewing room (I use the quotation marks so that you don't expect the sewing room to actually BE clean when I'm done--just less messy) in order to have more room to work with the quilt, and I couldn't decide where to put this lavender fabric, and then it occurred to me that if I used it, I didn't have to find a home for it.  So, I have a new spring pant set.  That works.

I finished it up this morning, then was in a bit of a dither about what to work on in my last few bachelorette hours, and then there was that silly naggy voice that I've been ignoring all week that insisted on doing some laundry and a bit of cleaning, so while I did some of the boring stuff, I set up Jeeves to do a couple towels: 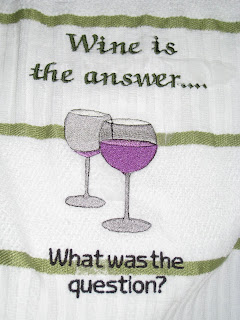 and the first half of a bag set I've been planning to make to put with our picnic supplies: 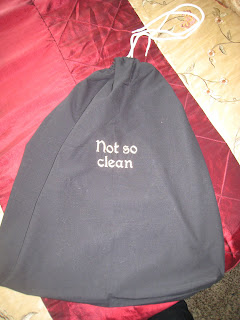 Obviously, there will be a "clean" bag as well, though I'm not sure how much use it will get.  The idea is that when one takes a picnic to an outdoor concert or play, one generally ends up with a trash bag and a bag of dirty plates and silverware.  Everyone I know--including myself--has mistakenly put something into the trash bag instead of the not-so-much trash bag.  Usually the most expensive knife or utensil one has brought along.  So, I'm thinking that a plastic bag for trash and a quite obviously NOT plastic bag for utensils might solve the problem.  If the theory works, I'll probably make a different bag eventually--something heavier or easier to wash.  A friend suggested this would also make a good laundry bag for travel, which I think is a good idea, though maybe a slightly bigger bag for that?

So the bag counts as half a project, but I still have another hour before I'll need to pick Andy up at the airport.  Maybe one more bag........?