Yesterday, Carolyn asked how long the yarn for the new lace shawl (Lotus Blossom Lace) had been in the stash, and whether it was "old" stash or "new" stash, which made me curious about the stash in general.  The yarn I'm using was one of my exceptions in 2009.  I had promised my mother a shawl for her retirement gift, and for unknown reasons, ordered THREE 880-yard hanks of Knitpicks Bare Laceweight.  I ended up using just a little over one hank, so the second hank was justifiable, but that third one really smacks of abuse of a yarn-purchase-exception.  Which is sort of why I want to use it up.

However, the oldest yarn in my stash might be this one: 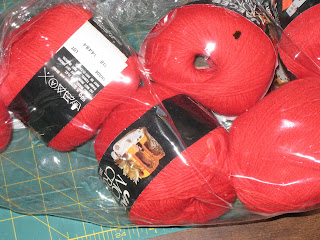 which I believe I bought before I bought my first house, which I think was 2003.  I also have 11 skeins of it in bright pink, and the only reason it hasn't been knit up in the past is that some rocket scientist at Jaeger yarn company thought it was completely unnecessary to list such useless details as yardage.  I might be a rather daring knitter at times, but even I am not going to jump into a project using an unknown amount of discontinued yarn.  Or at least not before a chocolate martini........

I thought I had one skein of dk to sport-weight cotton roaming around from this sweater, 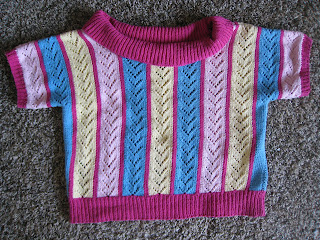 which I made in high school (so pre-1988), but I couldn't find it when I was redoing the sweater, so it may not exist.

Where is all the older yarn, you might ask?  Well, until 2002, I was a project-by-project yarn buyer and had ZERO stash.

Yes, you read that correctly.  I have been knitting since I was about 7, but have only been a SUPREME YARN HOARDER for about 8 and a half years. If that isn't crazy enough, I can actually trace my stash accumulation to 3 events:

1.  My sister's first child (born in January of 2003) which really turned me from a knitter who did maybe one project every 12 to 18 months to an obsessed maniac knitter, who was pumping out baby sweaters like a mad woman. There was a lot of yarn purchased at this time, but the majority of it was also knit up into what my family has dubbed the "Sutton Baby Collection."

2.  My discovery of lace knitting (maybe 2004?), which meant I could buy relatively inexpensive yarn that took forever to knit up, and I can tie TEN 1325-yard hanks of Skacel laceweight directly to this episode (and, while I have THREE shawls to show for it, there's still a heck of a lot of this stuff in my stash)

3.  The stress of getting married/selling and buying houses/adjusting to being a stepmother/and the horrible ex-wife saga.  According to my account history at Elann, the majority of the yarn I have purchased from them--which is probably the single biggest source of my stash--came in 2006 and 2007.  We got engaged in January of 2006, started having serious problems with the ex wife in December of 2005 (which would continue to escalate for several years and we won't be fully free from for another 8 years), we put my house on the market in March, sold it in 2 days, I moved in with Andy until we bought this house in July, sold his house in August, got married in September, I lost my 16-year-old cat, Catanova, on Halloween, and we went on our honeymoon in November.  Even though a lot of that was good stuff, it was a very stressful year, and I seem to have coped with the stress by buying yarn.  Obviously, lots and lots of yarn.

So, I think it might be fun to use up what I think might be my oldest yarn, so I'm considering using the yarn for the Lotus Blossom Tank.  It's a cotton/acrylic crepe which should have a nice drape to it.

Of course, today was spent with my sidekick 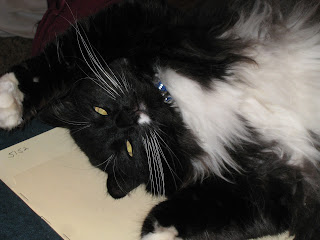 getting the final pieces of Andy's robe cut out (which was actually much easier once Theo ditched me to go snooze on the guest bed), and we've made great progress 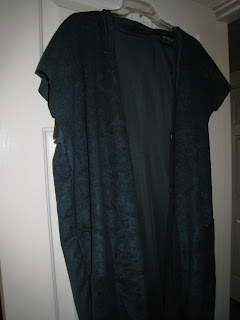 Tonight I'm doing the hand stitching to attach the cuffs to the inside of the sleeve, then sometime this weekend I hope to attach the sleeves & get all the rest of the hand-stitching done (hem and facing), and I could pull this off just one week late.  Which is pretty good for my track record.

And last but not least, a picture f the pink jacket complete with buttons: 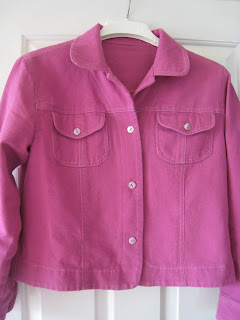 I adore this jacket.  When I have forgotten all about those 14 pattern pieces and the triplicate seam business, I might even be tempted to make a second one.

I fully expect my friends to stage an intervention if I am.....