If mistakes are learning experiences, I am on track to become the smartest person on the whole dang planet.

So, today was finishing Friday, and one of the things I hoped to bribe encourage myself to do with the 100-project challenge was to tackle the bin of sewing WIPs (for purposes of this story, we're currently ignoring the bin of knitting WIPs), so today I dug out this: 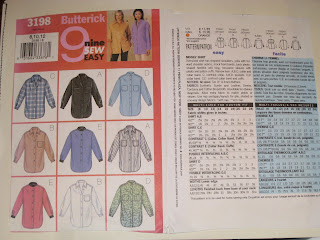 with the accompanying shirt I started at least 5 years ago.  I had the material cut out, a couple seams sewn, but as it was my first attempt at sewing microsuede (and that there were ever subsequent attempts is testimony to my stubbornness/optimism/foolishness or the fact that I bought a bunch before realizing that it was second only to those bizarre fake-fur things on the "worst possible fabrics to sew with" scale), it was soon banished to the Bin of Bad Projects and I probably spent a night or two curled up in bed in a fetal position to recover.

While I had learned to sew through sewing 4-H at around the age of 10 or 11, I loathed it and gave it up completely for about 20 years, when I decided that the pain of a breakup of a 5-year relationship would surely be eclipsed by the pain of taking up sewing again.  Being a sewing novice, I had not yet learned to fear patterns sporting the word "easy."  Like this one.  Now I don't care how experienced you are at sewing.  If you want to describe a pattern as "easy," generally it is not going to involve collars & facings and darts and FIVE pages of instructions.  The mere thought of what they might call a "difficult," or even "intermediate," pattern makes the blood run cold.  Obviously nothing less than boning, linings, and hand smocking at the very least.

So,I started the day with a pattern written by sadists and a material designed by their evil little brothers.  Let's call that mistake number one.

Mistake number two, which there are unfortunately no pictures of, was sewing the exact same seam with the exact same mistake TWICE.  And you know something, a mistake isn't any less wrong when you do it twice, funnily enough.

Mistake number three was attempting to do decorative stitching across the pocket without doing a test run first.  In my defense, I have gotten decorative stitching to work on microsuede once before, and the fact that I did my test run today on cotton instead of finding a swatch of microsuede can be chalked up to not having scraps of this material still laying around after 6 years.  Well, and a bit of foolishness--let's be honest.  Fortunately, the seams that attach the pocket almost completely cover up the hole I ripped in the material trying to rip out the snarl that was my decorative stitching attempt.


Mistake number four was misreading the pattern directions regarding the bottom button band & the hem, thinking, "Hm, that's a really unusual way to do things,"  and doing it anyway before realizing that it would be unusual because it wasn't even CLOSE to what the pattern intended. 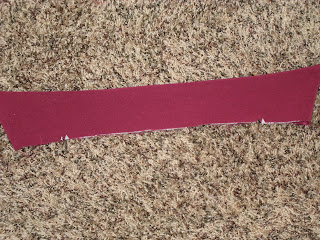 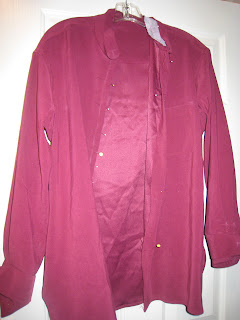 The hand stitching!!!!!  I thought I'd go ahead and get it all done before checking to see if I still have the button placement pattern piece after all this time, or if I'll be playing another round of "where were the buttons supposed to go?"

So, with all THIS fun today, that cross stitch is looking better and better.  This: 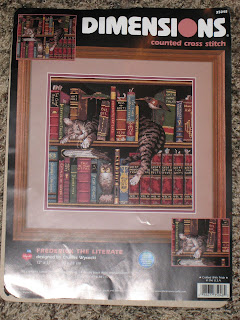 is what it is eventually supposed to look like.  A bit cutesy for my taste, but it was going to match a wallpaper book border when I originally started it.  What it will match when it's finally finished is anyone's guess. The padded cell this blouse is going to send me to?