This Holiday, My "Goodwill Toward Men" Is Unlikely To Extend To The Bastards At Husqvarna

The good news is, towel number 3 is done 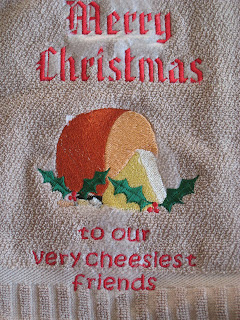 
The bad news is, Jeeves is definitely having problems--not the card or the design.

See the little "jag" on the inside curve there? 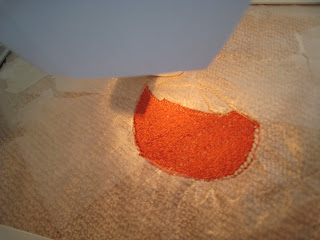 That isn't supposed to be there.  Nor is the line of random stitching BELOW the solid orange.  These are problems caused by Jeeves randomly resetting his location.  He still did it in the place he did on the other two towels, but this time he expanded and did it several other times.  Luckily, I was ready for it this time and was able to readjust him so that it wasn't too obvious.

Now, want to know what makes this even MORE fun?  THIS IS HOW THE ORIGINAL PROBLEM WITH JEEVES STARTED IN THE FIRST PLACE!  You know--that first repair that took two weeks, which then spawned the much LONGER repair because he came back with more problems than he went in with. It is just two months since I got Jeeves back.  Oh, and just in case I didn't hate my dealer enough today--the part that I asked them to order two months ago still isn't in.  At least I know it was ordered the SECOND time I requested it.

So....the new card has a one-year warranty on it (of which there are only 8 months left because two of those months were sucked up by the incredibly long time required for the second repair--and don't think for an instant that a company like Husqvarna gives you credit for anything like that), so I'm going to wait for a few months before taking Jeeves in this time & see if I can get my list of projects done before I have to turn him over to the "repair" guy to break other things.  And if the other part is going to go out as well, that will give it some time to fail as well & I can just get it all taken care of at once.