Unless something goes majorly wrong (or I finally snap and Andy finds me running around the house with an unfinished cornucopia on my head yelling "I'm an elf!  I'm an elf"), the next 5 Finished Projects are likely to be cornucopias.  That will leave me just two projects short.

No promises, but possible contenders are, 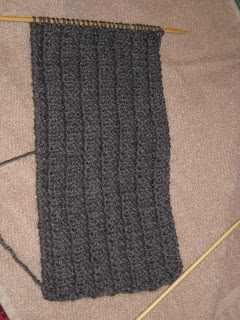 a new scarf, using a clever but somewhat boring pattern by the Yarn Harlot.

It is going quickly, and is good for multi-tasking--like while embroidering with Jeeves.  My trusty side-kick and I 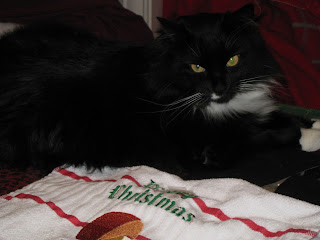 have been making towels as prizes for our upcoming Christmas party & cheese tasting.  I need 3 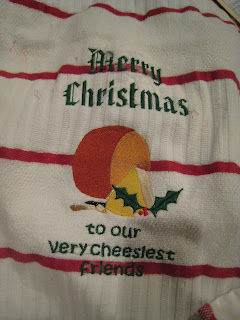 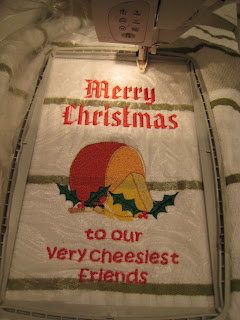 and just finished the second one tonight.  There's a problem, happening with the design--it keeps moving at a certain spot.  On the first towel, you can see the black, which is supposed to be the shadow of the cheese, quite a bit lower than the cheese.  I had enlarged the design on the machine, and thinking that might be the problem (not that it should be a problem, but I think we have all learned what to expect from Husqvarna machines by now), redid the design on the computer and added a second holly design to cover up the flub if it happened again--and this time it flubbed in a little different spot.  See those white stripes on the Parmesan wedge?  Yeah--not supposed to be there.  The fact that it's slightly different leads me to believe the problem is again with Jeeves, and thankfully the repair has a one-year warranty.  (unfortunately, of course, two months of that warranty were sucked up by the lousy Husqvarna service on the subsequent repair).  I really, really HOPE it is just the design, but I am WAY too irritated to do the third towel tonight.