There are 66 days left in the year, and I still need 21 finished projects.  And, in those 66 days are slightly time-consuming things called "the holiday season," which really kicks off right before Thanksgiving and ends either after New Year's Day or whenever people collapse from exhaustion--whichever comes first.  And during this time, I need to average a finished object every 3 days.

I think, at this point, it's time for a little visit to the land of REALITY.  Not a long enough visit to accept that setting insane goals for one's hobby is completely idiotic and give up or anything, but I think it's time for a strategy session.  66 days left, and there are a few facts that even I cannot ignore:

1.  It's time to raid the Project Time Out Bin.  Half-finished projects are my friends right now.

2.  It's time to finish Fleur, even if it does mean unraveling some of the beaded band because it's too long, which has been the sticking point for the last 2 years.
3.  Sweaters are not my friends right now.  Short, easily-finished projects are my friends.  Meet the new stocking cap project: 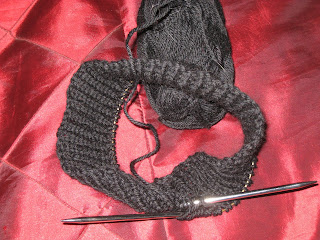 Improvised design, portable, and, incidentally, using 100-yard skeins instead of bigger 200-yard skeins for a little boost to my stash busting tallies for the year.

4.  I probably can't really knit a hat every 3 days, and even if I can, I don't actually have a use for 21 hats, so there will need to be some sewing 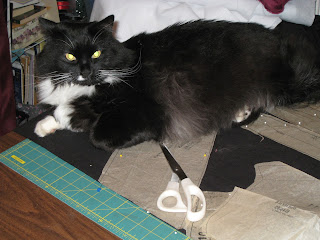 and if I'm making a holiday apron with a contrasting color for top & pocket accents, it would be a good idea to cut out ALL the pattern pieces in each color, thereby being able to make two aprons in almost the same time as it would take to make one.  Of course, one can probably do all of this much faster WITHOUT kitty assistance, but I don't think I'm likely to get to explore that possibility. 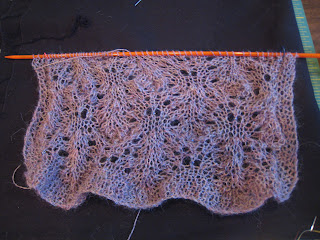 but I respond well to bribery involving lace and beads.

6.  There are some people who use their hobbies as a way to relax.  Go figure.