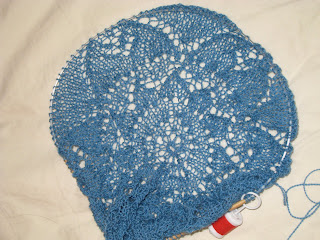 Working on the new Pi shawl.  As I need a little over 8 finished projects per month, what could be a more foolish idea than launching into a 1500-yard lace project--except, of course, starting a new quilt, which mercifully I haven't done.

I'm not using Elizabeth Zimmermann's suggested pattern.  Not that there's anything wrong with it, but I've seen so many Pi shawls on Ravelry that I needed something different.  AND, since I'm making it up anyway, it makes a great portable project:  no pattern means no pattern to cart around.  The color is actually a bit more accurate in this picture 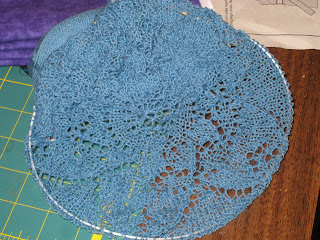 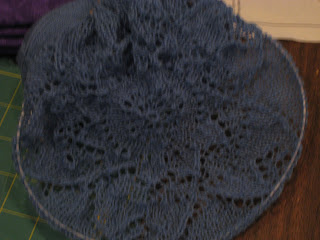 Not that I shouldn't be working on Andy's birthday sweater--or cleaning the house, for that matter--but Pi shawls are amazingly addictive.  I don't know why--pi as a math concept never really did much for me.  Actually, most math never really did much for me.  I think the Pi shawl is exciting because there is NEVER ANY PURLING.  And, since I'm making it up, it's really interesting to see how each round will look and how it will progress, because I honestly have no idea how it will look.  I actually only have the shawl stitch patterns planned out to the second-to-last set, and haven't thought too much about the edging just yet.  So it would be impossible to figure out what it will look like because I don't yet have any idea how I'm going to do a very large chunk of it, so it's rather like a little knitting surprise party for myself.  And not in a bad way--like forgetting that a certain baby sweater will need space for sleeves........