Not The Best Weekend

So, you might have guessed that I didn't have the greatest holiday weekend.  Surprisingly, the Knitting Gods didn't think a broken "newly repaired" sewing machine & a cold were quite enough.  I ran into a snag on the Baby Reefer Jacket 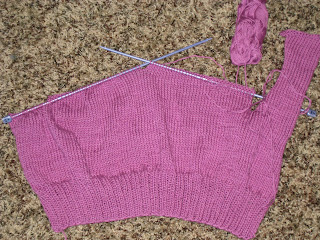 which, to be fair, is completely my own fault, but annoying just the same.  I decided to make the two fronts & back all in one piece, and just divide for the sleeves.  Simple, no?  Actually, no.  It turns out that the sweater is made with drop sleeves, so there I was knitting away, when I finally double checked the pattern and realized that I was going to end up with one great big piece of knitting with no armholes.  AND, there are no schematics for the pattern, so I have no idea how far down the body the sleeve will actually reach, so I decided to break at a reasonable spot for the sleeves and hope for the best.  I can either steek or sew a bit if I'm off, but I'm really hoping it will be the sewing option.  I have steeked and will be steeking Andy's sweater, but it cutting knitting still just feels fundamentally wrong.

AND, if that weren't enough, I cut out an entire ensemble this weekend--you know, when I was planning to have a working sewing machine--and discovered that I had missed this 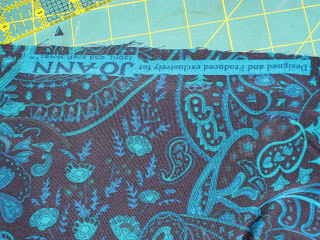 I've gotten used to manufacturers printing farther & farther into the material, but this was originally a full 2 inches from the selvage edge of the material, and is now on the side of the pants.  It was nice of Joann Fabrics to autograph it for me--just in case I forgot which manufacturer would do something so absolutely irritating, it will be on my pants!  When I am in a better mood, I'll be making a sort of band to go down each side to cover it up, but I think it's time to start shopping elsewhere for fabric.  The last 3 projects I've made with fabric from Joanns had some sort of flaw/hole/billboard on them, and I'm just tired of the poor quality--not to mention the insanely long lines at the stores.

I did manage to finish the July Project of the Month: 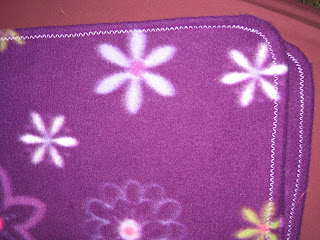 a little fleece baby blanket that just needed hemming.  Usually I like to do a more creative decorative stitch for the hem, but once Jeeves came home from the shop, 22 out of 35 stitches NO LONGER WORKED, so I thought this would look a little sharper than my other options.....although the button hole was a strong contender.

Beading always cheers me up, so the beaded Ostrich Plume scarf saw a lot of action this weekend 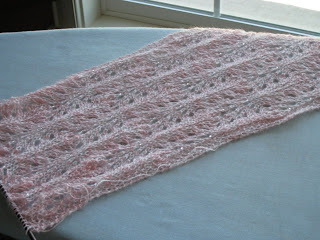 From this angle you can sort of see the beads.  I LOVE THIS SCARF!!!!

I lead a Yahoo Group dedicated to Elizabeth Zimmermann patterns, and we've decided to do a July Pi shawl knit-a-long, which of course is a terrible idea since I'm trying to finish 100 projects and should be thinking hats not shawls, but.....

So I went to my laceweight bin 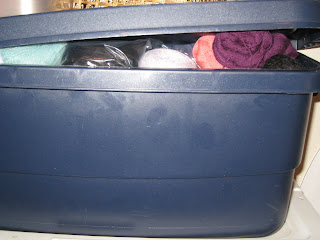 which STILL can't actually close, and faced with ALL those options, I was really leaning toward this: 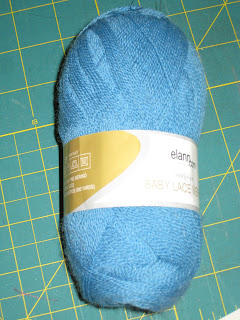 which I have no less than 4 skeins (2400 yards) of, and wouldn't you think I'd be thinking, "Whoo hoo!  Great way to use up at least 2 of those skeins?"  Nope!  I actually had to check Elann's website to make sure they were still making the Baby Lace Merino IN THIS COLOR before I could convince myself to use it!!!!  Well, obviously I've gone round the yarn bend now.  I have no less than 10 balls of this stuff still in my stash--not counting everything else.  I've had some of this yarn for so long that it has become part of the family!!!!